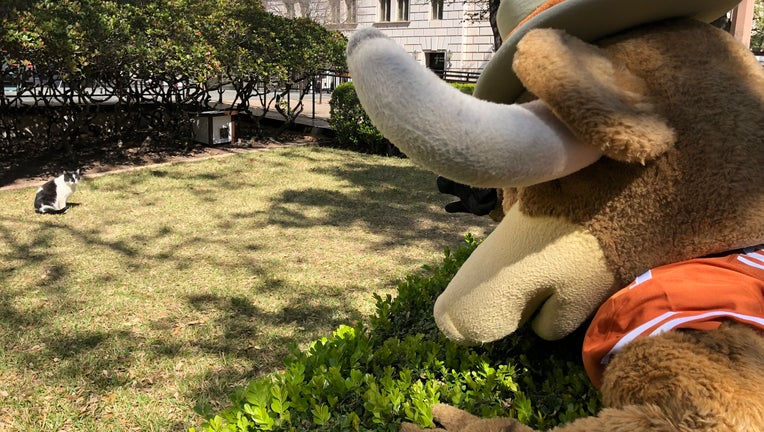 The 13-year-old Domino had been cared for on campus since he was a kitten in 2009 and was well known to UT Austin students. (UT Austin)

AUSTIN, Texas - A Change.org petition is collecting signatures to convince the University of Texas at Austin to erect a small statue or plaque in honor of beloved campus cat Domino.

Domino passed away Tuesday after suffering breathing issues due to a possibly cancerous growth in his throat, according to Cats of West Campus, a group that says it cares for 5-10 abandoned and feral cats in West Campus including Domino.

Domino was having trouble eating and struggling to breathe earlier this week, and the decision was made to help him make a "peaceful transition across the Rainbow Bridge at home," says the group.

The 13-year-old Domino had been cared for on campus since he was a kitten in 2009 and was well known to UT Austin students. The spot outside the Peter T. Flawn Academic Center (FAC) near the UT Tower is also known as Domino's Lawn.

The petition, which began two months ago around the time caretakers started seeking veterinary care for Domino's health issues, has collected just under 4,300 signatures and is asking UT Austin to erect a small statue in "memory of Domino in his favorite spot on campus".

The organizer of the petition says that they are working to get in touch with university administration again about the statue in light of Domino's passing.