Russia is entering its fourth week of attack Ukraine as the death toll and destruction continues to rise. Secretary of State Antony Blinken gave new details about the conflict, including how Russia is setting the stage to use a chemical weapon and then falsely blame Ukraine to create a false narrative and justify use of even more deadly force. Blinken said Russian President Vladimir Putin is also kidnapping local officials and replacing them with puppets and this action will continue to escalate.

MEDYKA, Poland (AP) - The president of Poland compared Russia’s attacks on Ukraine to Nazi forces during World War II, saying Tuesday that besieged Mariupol looks like Warsaw in 1944 after the Germans bombed houses and killed civilians "with no mercy at all."

President Andrzej Duda, who will host President Joe Biden later this week in a Warsaw rebuilt from the ashes of that war, spoke as traumatized people bearing witness to the horrors inflicted on Ukraine by Russian forces continued to flee. They arrived by the thousands in Poland and other neighboring nations.

Among them was Viktoria Totsen, a 39-year-old from Mariupol who entered Poland as part of an exodus that has become Europe’s worst refugee crisis since World War II.

She described how the bombing by Russian planes had become incessant, prompting her to flee with her two daughters.

"During the last five days the planes were flying over us every five seconds and dropped bombs everywhere," she said. 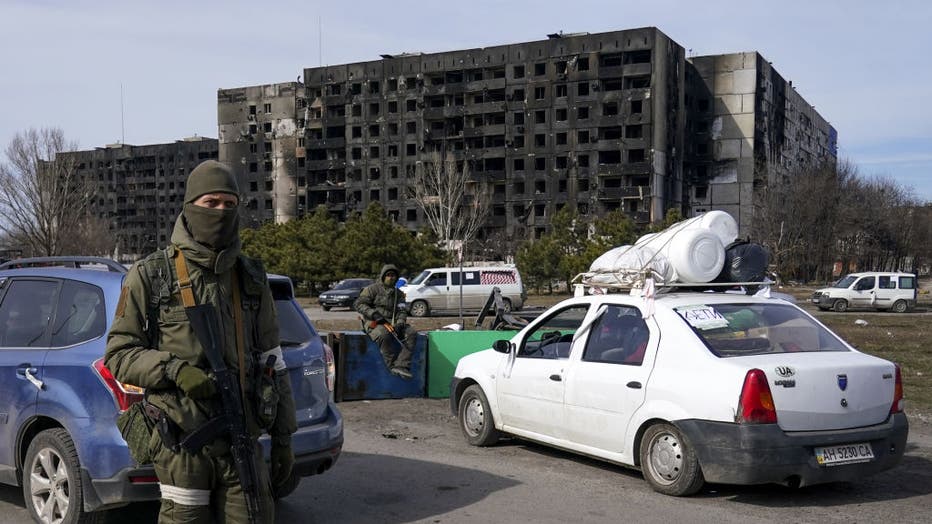 Military personnel are seen as civilians being evacuated along humanitarian corridors from the Ukrainian city of Mariupol besieged by Russian military and rebel forces, on March 20, 2022. (Photo by Stringer/Anadolu Agency via Getty Images)

During a visit to Bulgaria, Duda compared the Russian shelling of schools, hospitals and other civilian targets, to the atrocities committed by German forces during their occupation of Poland during World War II.

"My countrymen, Poles, are looking today at Mariupol and are saying, ‘God’ — they say it with tears in their eyes — ‘Mariupol looks like Warsaw did in 1944 when Nazis, Hitler’s Germans, were brutally bombing houses, killing people, killing civilians with no mercy at all,’" Duda said.

In the Polish border town of Przemysl, a refugee from Mykolaiv, 45-year-old Natalia Shabadash, described a rocket explosion just 500 meters (yards) from her home.

"It was very scary, that’s why we decided to leave our home," she said, explaining that her husband, like many Ukrainian men, remained in the country.

The UNHCR reported Tuesday that 3.53 million people have left Ukraine, with Poland taking in the lion’s share — more than 2.1 million — followed by Romania with more than 540,000 and Moldova with more than 367,000. Slovakia and Hungary have also welcomed refugees.

The International Organization for Migration estimates that nearly 6.5 million people are also internally displaced within Ukraine, suggesting that some, if not most, might flee abroad if the war continues.

Many of those who cross into Poland choose to remain, but it is impossible to know the exact number. Poland's Border Guard agency registers them on entry from Ukraine, but not if they move across the open borders of the European Union to Germany, France, Italy or any of the other countries where Ukrainians are heading.

It's clear, however, that many opt to stay in Poland, close to their homeland in hopes of returning after the war and drawn by the linguistic and cultural similarities in the fellow Slavic nation. Large numbers of Ukrainians in recent days have registered their children in Polish schools or applied for a national ID number that will give them access to health care and other social services.

Shabadash, who fled Mykolaiv, said she was treated very well in Poland and felt "so grateful to the Polish people," but intended to to go France.

Meanwhile, groups of orphans and sick children from Ukraine are also arriving, sometimes in transit.

In Warsaw, dozens of Ukrainian orphans and their caretakers who are headed to refuge in the U.K. were stuck Tuesday due to missing paperwork from Ukraine.

The nearly 50 youngsters from orphanages in the central Ukrainian city of Dnipro were due to fly to London on Monday before traveling on to Scotland. But they were forced to wait in a hotel until the bureaucratic holdup could be dealt with.

Their journey was organized by a Scottish charity, Dnipro Kids, which was set up in 2005 by supporters of Hibernian Football Club in the Scottish capital, Edinburgh.

U.K. Home Secretary Priti Patel said last week that British authorities were working with Poland and Ukraine "to ensure the children’s swift arrival to the U.K."

Duncan MacRae, the media manager of Dnipro Kids, said the children were first evacuated by train from Dnipro to the western Ukrainian city of Lviv. They were then put on a bus and taken to Poland, where they stayed for the past two weeks.

Sally Becker, executive director of the foundation Save a Child, which is helping with the evacuation, said the delay was due to a document that hadn’t been provided by Ukrainian authorities, and emerged just as the group was on the way to the airport.

"All we want to do is give them safe, temporary sanctuary in Britain until the war is over and it’s safe for them to go home," she said.