A man has died following a SWAT situation-turned-officer involved shooting in a neighborhood in southwest Austin Wednesday. FOX 7's Bridget Spencer has the latest.

AUSTIN, Texas - A man has died following a SWAT situation-turned-officer involved shooting in a neighborhood in southwest Austin.

According to Austin Police Chief Joseph Chacon, the incident began when Austin Code Enforcement and district representatives arrived to a residence in the 10600 block of Pinkney Lane around 9:16 a.m. this morning to serve a search warrant for nuisance and abatement concerning an overgrown lawn.

Chacon says that the warrant was served as part of an ongoing situation with Code Enforcement regarding an overgrown lawn in the front and back of the home.

A SWAT situation has now turned into an officer-involved shooting, says the Austin Police Department.

No one answered, so the warrant was left on the door. While contractors started lawn work at the home, shots were fired from inside the home. No one was injured in this incident and officers and other personnel on scene were able to escape the gunfire and make it to safety, according to police. Police then activated their SWAT team.

When SWAT arrived with mental health officers and a crisis negotiator, they attempted de-escalation techniques and officers tried for several hours to make contact with the man inside, mostly using the public address system. Nearby Kiker Elementary School was also placed on a lockdown out of an abundance of caution, says Chacon.

APD is giving a briefing on a SWAT situation in Southwest Austin that has now turned into an officer-involved shooting.

Officers continued to try and get the man to exit the home, but soon the house looked like it was fully engulfed in flames and it looked likely the man had succumbed to the flames and smoke, says Chacon. The Austin Fire Department was then called in to put the fire out.

Twenty minutes later, the man stepped out of his garage with weapons in hand. It is at that point that Chacon says a SWAT officer shot him and he went down. Officers approached and took his weapons, pulling the man away from the house, and began life-saving measures. 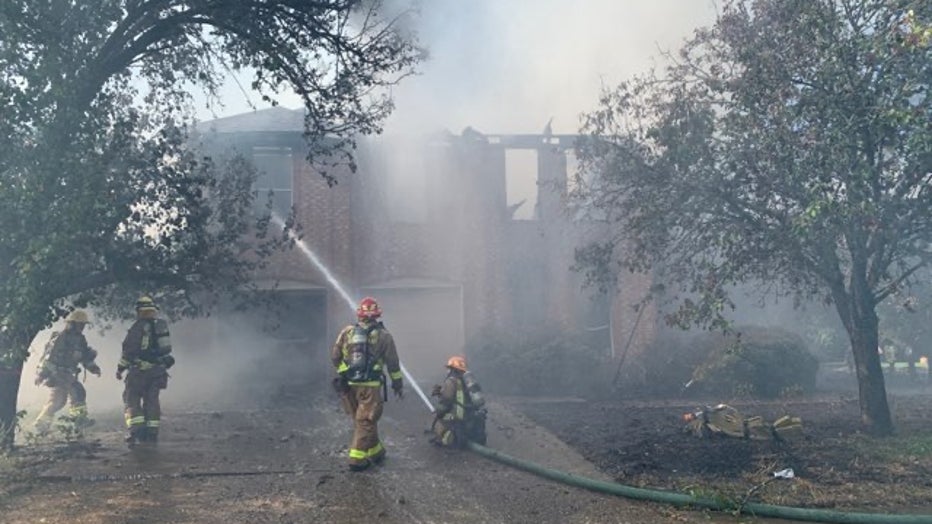 "Austin Fire Department is on scene of a fully involved structure fire at 10616 Pinkney Ln," AFD said in a tweet.

The man, described as an adult male in his 50s, was transported to a local hospital where he was pronounced dead just after 4 p.m.

Chacon says there was no indication anyone else was in the house and the lockdown on Kiker Elementary has since been lifted.

The SWAT officer who shot the man is an eight-year veteran with APD and will be placed on administrative duty pending the outcome of the criminal and administrative investigations into the incident.

According to police, officers were dispatched to the 10600 block of Pinkney Lane around 11 a.m. for reports of a barricaded subject.

Identification of the man is pending notification of next of kin, says Chacon. It is also currently unknown if any additional munitions were in the home or were set off by the fire.

Residents are still being asked to avoid the immediate area until further notice while the scene is still being contained and scaled down. Chacon says AFD is expected to maintain an apparatus on the street to make sure the fire is fully extinguished.