In addition to the agency's team, Chris Hansen from ‘To Catch a Predator’ worked alongside investigators. The sting was dubbed "Operation Cyber Guardian II" and lasted a week. Undercover detectives posed as girls and boys – as young as 12 years old – on the internet.

Sheriff Judd said three suspects believed they were speaking to the guardian or parent of a child who wanted to teach their kid to have sex or arrange for the suspect to meet the minor, officials said. Others either traveled to have sex with children, had sexually explicit conversations, or sent "harmful material." It turned out the person on the end of those conversations was an undercover detective.

Among those arrested were people who worked at Disney, Publix, and Amazon, along with a man who installs internet safety programs in schools — the very same firewall blocking systems meant to protect children from sexual predators. 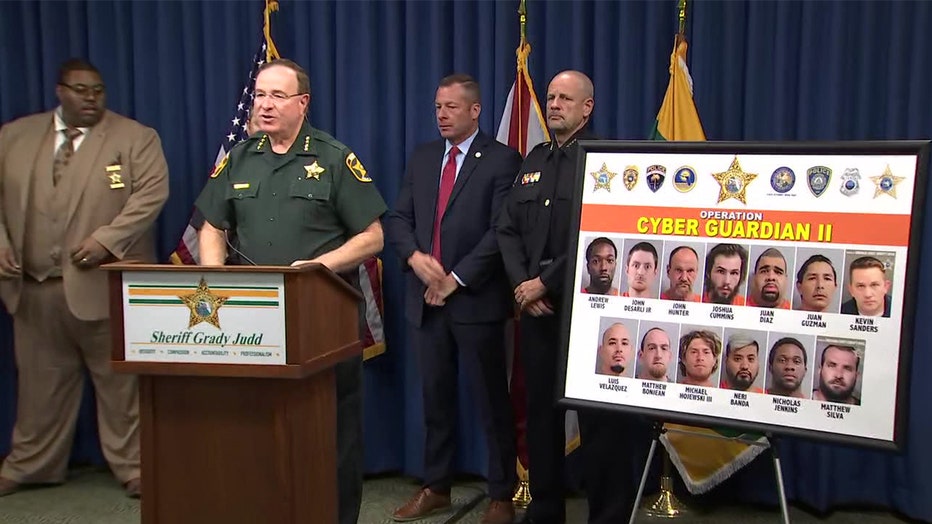 "We will continue to conduct proactive operations like this to search out these evil predators before they get to our children," Sheriff Judd said. "Thanks to the hard work of our detectives and the detectives in our partnering agencies, these 13 predators have been arrested. We are going hold them criminally accountable for their attempts to sexually abuse, groom, and corrupt our children."

READ: U-Haul repossesses couple's rental believing it was abandoned at Clearwater hotel, dumps all belongings inside

According to the sheriff's office, several of the suspects confessed to investigators after their arrests:

Sanders began chatting on a social networking site with an undercover detective posing as a 13-year-old girl, investigators said. The sheriff's office said Sanders described the sex acts he wanted to perform on the child, telling the "girl" they would "have to be careful" because of her age.

Investigators said Sanders has engaged online with undercover detectives he believed to be children for several years, but always ended his communication before actually traveling to meet up. During this latest investigation, the sheriff's office said they were able to identify Sanders and obtained a warrant for his arrest.

Sanders admitted to having sexually explicit conversations with a minor upon his arrest, telling detectives he had been doing it for years and that communicating online with underage children was his "addiction."

He told detectives he works as a roving IT support specialist at Disney, and previously was a member of Disney's Youth Education Series program which offers accredited educational opportunities for students ages 5 to 18.

Polk County detectives said Silva began speaking to an undercover detective who was posing as a 14-year-old girl.

The detective told Silva "she was only 14," officials said.

"Knowing this, Sanders described the sex acts he wanted to perform on the child," according to a news release from the sheriff's office.

Investigators arrested Silva at a Publix in Melbourne, where he works as a bagger. He later confessed to detectives.

DeSarli began communicating with an undercover detective posing as a 14-year-old girl on a social networking site when investigators said he asked, "How old are you Just be honest I don't mind." When the "girl" said she was 14 and asked if he was OK with her age, detectives said DeSarli replied, "Yes love Let's make it happen" and described how he planned to have sex with her. Investigators said he also sent lewd photographs.

He was arrested after traveling to the undercover location to meet up with the "child." Detectives said they found cocaine, heroin and drug paraphernalia in his vehicle, which was his assigned work van.

DeSarli confessed to having sexually explicit conversations with a 14-year-old. He also told investigators he is employed as an alarm technician, and drove his work van from Venice to the undercover location in Polk County.

Lewis began communicating on a social networking site with an undercover detective posing as a 14-year-old boy, investigators said. During the conversation, the "boy" told Lewis several times that he was only 14, but Lewis said he still wanted to meet up and then "graphically described the sex acts he wanted to perform," the sheriff's office said.

Investigators said when Lewis traveled to the undercover location, expecting to have sex with the teen, he brought a condom with him.

After his arrest, Lewis admitted to detectives that he knew the person he was talking to was 14. He told detectives he works as an audio/visual technician with Lockheed Martin.

Polk detectives said Hunter replied to an online dating site ad posted by an undercover detective posing as a mother who wanted to introduce her 14-year-old daughter to sex. Investigators said Hunter also communicated directly with the "daughter" directly, graphically describing the sex acts he wanted to perform with her, then sent lewd photographs of himself.

After Hunter arranged to meet and have sex with the underage girl, he traveled to the undercover location where he was arrested by Polk detectives. Investigators said he admitted that he knew he was communicating with a 14-year-old and to sending a nude photograph of himself.

Detectives said Banda worked at an Amazon warehouse in Auburndale. They said he began speaking to an undercover detective who was posing as a 14-year-old boy.

"He told the ‘boy’ he had ‘a thing for younger guys.’ Banda continued communicating with the 'boy' on the Kik application asking the 'boy' when they were going to have "their make-out session." The undercover detective reminded Banda that he was only 14; Banda said he didn't mind," according to the sheriff's office.

Banda confessed to investigators after his arrest.

Over the next few days, he "continued the conversation and explicitly described the sex acts he wanted to perform on the child," officials said.

Upon his arrest, Hojewski admitted to having sexually explicit conversations and sending nude photos to a person who he believed to be an underage girl, according to the sheriff's office.

Velazquez said he was going to meet up with the 15-year-old girl he thought he was speaking to. Once again, it turned out to be an undercover detective, officials said. However, he did not show up at the planned meeting spot.

Detectives said he "contacted the 'girl' saying he got ‘scared.’ He then sent the ‘girl’ two nude photos of himself."

Investigators obtained a warrant and arrested Velasquez, who then confessed.

According to detectives, Jenkins believed he was speaking to a 15-year-old girl and told her in an online conversation that he didn't care about her age. They said he described the sexual acts he wanted to perform and arranged a meeting.

When he arrived, he was arrested.