Pompeo brushes aside election results, claims there will be smooth transition to second Trump term

U.S. Secretary of State Mike Pompeo said Nov. 10 that there would be a smooth transition to a second Trump administration, despite President-elect Joe Biden’s projected win.

WASHINGTON - Secretary of State Mike Pompeo defiantly told reporters on Tuesday that there would be “a smooth transition to a second Trump administration,” despite President-elect Joe Biden’s projected win.

Pompeo’s remarks come amid President Donald Trump’s refusal to concede after his projected loss in the 2020 presidential election, raising unsubstantiated claims of voter fraud. Biden captured 290 Electoral College votes to Trump’s 214, according to projections by FOX News, the Associated Press and other major news outlets. Only 270 are needed to win the White House.

Biden has faced an uphill battle in the transition period, with some saying Trump's refusal to acknowledge his Democratic rival's victory could undermine U.S. national security.

Pompeo made the statement when asked about this subject from a reporter. 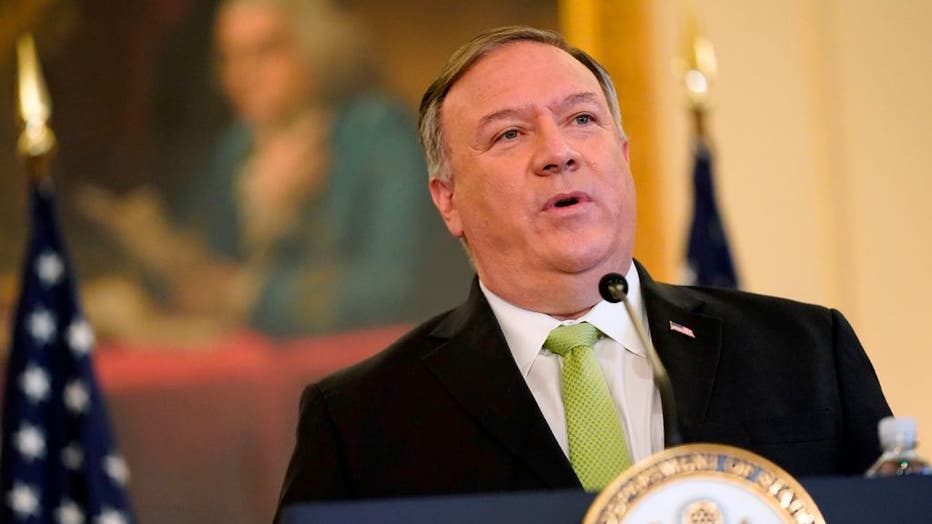 U.S. Secretary of State Mike Pompeo speaks during a news conference on Sept. 21, 2020 at the U.S. State Department in Washington, D.C. (Photo by PATRICK SEMANSKY/POOL/AFP via Getty Images)

"There will be a smooth transition to a second Trump administration," Pompeo said. Breaking into a smile, he added: "Right. We're ready. The world is watching what's taking place here."

"We're going to count all the votes. When the process is complete, there'll be electors selected. There's a process. The Constitution lays it out pretty clearly," Pompeo said.

The General Services Administration, meanwhile, led by a Trump-appointed administrator, Emily Murphy, has declined to formally recognize Biden as president-elect. It’s a necessary move to free up money for the transition and clear the way for Biden’s team to begin putting in place the transition process at agencies.

Trump has also blocked Biden from receiving the intelligence briefings traditionally shared with incoming presidents, according to the Associated Press. The president’s resistance, backed by senior Republicans in Washington and across the country, could also prevent background investigations and security clearances for Biden’s prospective national security team and access to federal agencies to discuss budget and policy issues.

Complicating Biden's challenge is the Republican Party's widespread refusal to acknowledge his victory. Without evidence, Trump and his allies are insisting that the election was “stolen.”

Biden said his team is already beginning the transition and the lack of acknowledgement by Trump is of little consequence to that.

Attorney General William Barr authorized the Justice Department to probe unsubstantiated allegations of voter fraud. Barr’s authorization gives prosecutors the ability to go around longstanding Justice Department policy that normally would prohibit such overt actions before the election is certified.

In a memo to U.S. attorneys, obtained by The Associated Press, Barr wrote that investigations “may be conducted if there are clear and apparently-credible allegations of irregularities that, if true, could potentially impact the outcome of a federal election in an individual State.”

He said any allegations that would “clearly not impact the outcome of a federal election” should be delayed until after those elections are certified and prosecutors should likely open so-called preliminary inquiries, which would allow investigators and prosecutors to see if there is evidence that would allow them to take further investigative measures.

Barr did not identify any specific instances of purported fraud in the memo.

Barr, a loyal ally of President Donald Trump, helped broadcast Trump’s claims of voter fraud before the election, attacking mail-in voting as prone to undue influence and coercion, despite multiple studies debunking the notion of pervasive voter fraud in general and in the vote-by-mail process.

Biden holds a sizable lead in multiple battleground states and there has been no indication of widespread improperly counted or illegally cast votes that would shift the outcome, as Trump has falsely claimed. In fact, election officials from both political parties have publicly stated the election went well, though there have been minor issues that are typical in elections, including voting machines breaking and ballots that were miscast and lost.

Meanwhile, Biden pressed forward with plans to build out his administration as president-elect, assembling a team of experts to face the surging COVID-19 pandemic.

"We're already beginning the transition, we're well underway," Biden said Tuesday in response to Pompeo's comments and  the challenges faced amid the transition. "Nothing's going to stop that."

“I’m confident that the fact that they’re not willing to acknowledge we won at this point is not of much consequence in our planning and what we’re able to do between now and January 20,” Biden added.