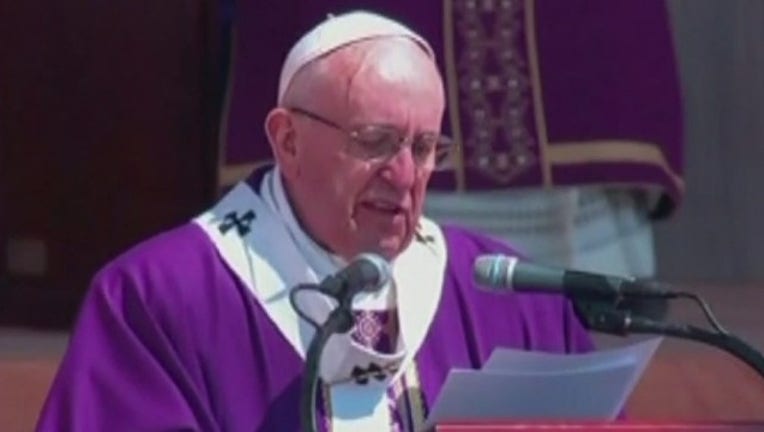 MALMO, Sweden (AP)  Pope Francis traveled to secular Sweden on Monday to mark the 500th anniversary of the Protestant Reformation, a remarkably bold gesture given his very own Jesuit religious order was founded to defend the faith against Martin Luther's "heretical" reforms five centuries ago.

While the visit initially raised eyebrows, the Vatican and Lutheran church both insist the event is no celebration of Luther's revolt. Rather, they say, it's a solemn commemoration to ask forgiveness for the schism in Western Christianity and rejoice that relations have improved in the last five decades.

Francis has prioritized these deeply symbolic encounters to show that even while divided on dogma, the Christian faithful can and must work together and pray together, especially in times of religious persecution.

"If we don't do it, we Christians hurt ourselves by division," Francis said in an interview this weekend with a Jesuit journal.

Francis arrived a few minutes ahead of schedule in Malmo, southern Sweden, and went immediately into an airport audience with Prime Minister Stefan Lofven, followed by a meeting with Sweden's royals.

The main event of the day is an ecumenical prayer service to commemorate the anniversary with the head of the Lutheran World Federation, Bishop Munib Younan, at the Lutheran cathedral in Lund.

The Vatican and Lutheran delegations were to ride together in a bus itself an ecumenical voyage of sorts to attend an event highlighting both churches' peace-making and humanitarian efforts. Testimony from refugees and the Catholic bishop of besieged Aleppo, Syria, top the list of speakers.

Francis continues his visit on Tuesday with a Catholic Mass in the Malmo sports stadium, added in at the last minute after Sweden's tiny Catholic community balked that Francis was ignoring them and coming only for the Protestant commemoration.

"I wanted to insist on an ecumenical witness," Francis said in the interview. "Then I thought about my role as pastor to a Catholic flock" and added in the Mass and an extra day.

The Protestant Reformation started in 1517 after Luther nailed 95 theses on the church door in the town of Wittenberg, denouncing what he saw as the abuses of the Catholic Church, especially the sale of indulgences.

Pope Leo X excommunicated him, but the church couldn't stop his teachings from spreading throughout northern Europe or the world. Catholics persecuted Protestants and vice versa for hundreds of years.

St. Ignatius Loyola founded the Jesuit order in 1537, 20 years after Luther's protest, in part as a response to the heresies being promoted, the Rev. Charles Connor, a church historian, wrote in "Defenders of the Faith in Word and Deed."

"The work of the Jesuits in defending the faith must be looked at in the context of the Counter-Reformation," he wrote. "The times called for a spirited defense of the faith. It was the time for Catholic renewal."

Years ago, Francis spoke harshly of the Protestant reformers. But in the run-up to the trip, he has had only words of praise for Luther. He recently called the German theologian a reformer of his time who rightly criticized a church that was "no model to imitate."

"There was corruption in the church, worldliness, attachment to money and power," Francis told reporters this summer.

They are the same abuses Francis has criticized in the 21st-century Catholic Church he now leads.