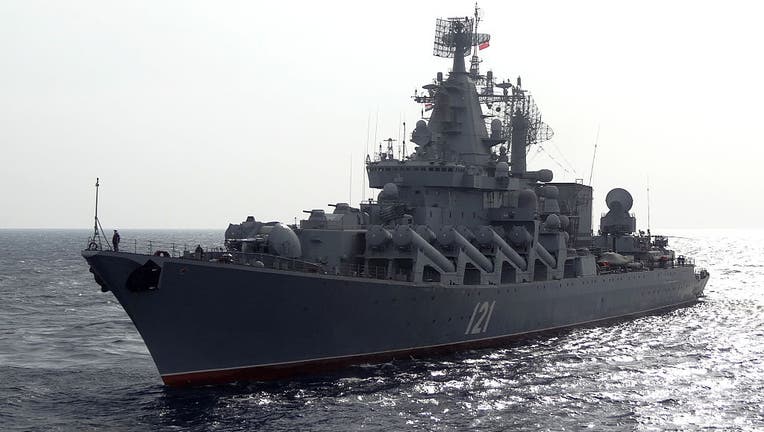 The Russian missile cruiser Moskva patrols in the Mediterranean Sea, off the coast of Syria, on December 17, 2015. Russia began its air war in Syria on September 30, conducting air strikes against a range of anti-regime armed groups including US-back

Russia on Friday is claiming to have destroyed a factory in Kyiv that makes anti-ship missiles after confirming that the flagship vessel of its Black Sea navy has sunk.

The Moskva cruiser rose to prominence at the beginning of the war when a group of Ukrainian soldiers defending Snake Island told its operators to "go f--- yourself" instead of surrendering, according to Reuters. Moscow is now saying the warship went down after a fire on board caused an explosion, but Ukrainian officials say their forces struck it Thursday with two cruise missiles.

"During the towing of the cruiser Moskva to the port of destination, the ship lost its stability due to hull damage received during a fire from the detonation of ammunition. In the conditions of stormy seas, the ship sank," Russia’s Ministry of Defense told state media.

In an apparent retaliatory strike for the destruction of the ship, the ministry said Friday it hit a factory on the outskirts of Kyiv that produces and repairs missiles, including anti-ship ones, Reuters reports.

RELATED: Russia's sunken warship may have been carrying piece of 'True Cross,' a Christian relic

"The number and scale of missile strikes on targets in Kyiv will increase in response to any terrorist attacks or acts of sabotage on Russian territory committed by the Kyiv nationalist regime," it reportedly added.

The ministry also claimed it downed a Ukrainian helicopter involved in an attack Thursday on a Russian border village, destroyed a group of up to 30 "Polish mercenaries," and seized control of a steel plant in Mariupol, according to Reuters.

A mechanic at a car repair shop in Kyiv told Reuters Friday that three strikes targeted an industrial building across the street from his workplace.

"The building was on fire and I had to hide behind my car," Kirill Kyrylo said before the blaze was extinguished by firefighters.