From the early morning, Kharkiv is under heavy shelling as thousands were forced to flee the city. Maria Avdeeva has documented the destruction in her city and explains the continued lies from President Putin to the Russian people.

Russian troops stepped up their bombardment of Ukraine's besieged port city of Mariupol on Sunday, bombing an art school where officials say 400 people were sheltering.

Hours after the strike, Russia demanded that Ukrainians in the besieged city lay down their arms in exchange for safe passage out of town. Ukrainian leaders quickly rejected the offer.

Mariupol continues to bear some of the war’s greatest suffering. On Sunday Ukrainian President Volodymyr Zelenskyy accused Russia of war crimes over its siege, describing the attack on the city as "a terror that will be remembered for centuries to come." In his nightly address to the nation, Zelenskyy said Ukraine is interested in peace, and that ongoing talks with Russia are "necessary."

Mariupol, a strategic port on the Azov Sea, has been encircled by Russian troops — cut off from energy, food and water supplies since the early days of Russian President Vladimir Putin’s invasion of Ukraine launched on Feb. 24. Civilian life has been relegated to bomb shelters, with aid groups saying the city is facing a humanitarian crisis. Russian forces have also cut off its access to the sea of Azov. 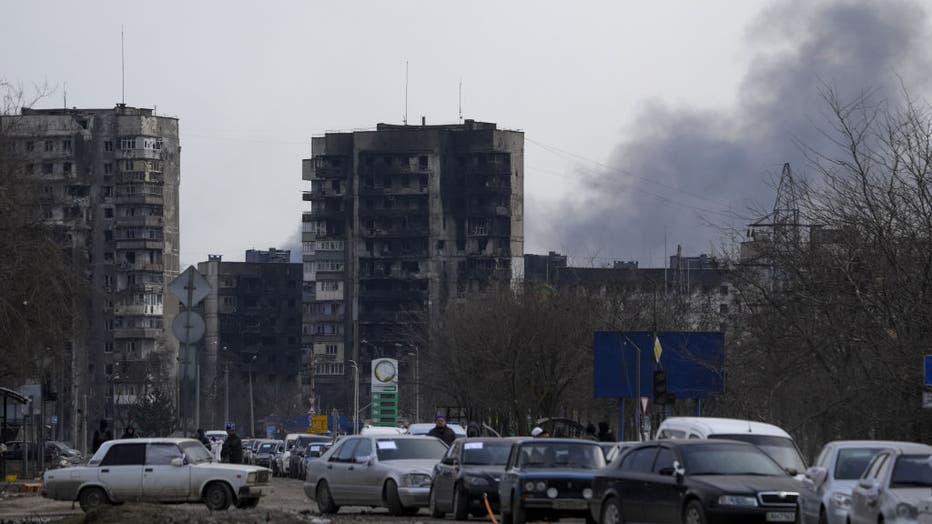 Civilians trapped in Mariupol city under Russian attacks, are evacuated in groups under the control of pro-Russian separatists, through other cities, in Mariupol, Ukraine on March 20, 2022. (Photo by Stringer/Anadolu Agency via Getty Images)

An adviser to Ukraine’s president said there was no immediate military help for Mariupol, saying the nearest forces able to assist were already struggling against Russian forces at least 100 kilometers (60 miles) away. Pitched battles continue around the Azovstal steel plant, one of the largest in Europe.

A special forces unit of the Ukrainian National Guard said that four Russian navy ships shelled the Azov Sea port on Sunday, as part of Russian military’s effort to "cynically destroy the Ukrainian city using all the arsenal available to it." There was no immediate word on casualties from that incident.

In a statement, the Mariupol city council said Russian soldiers have forced several thousand residents — mostly women and children — to leave and be relocated to Russia. It didn’t say where in Russia and the AP could not immediately confirm the claim.

The city council said Sunday that nearly 40,000 people have used their own vehicles to leave the city via a humanitarian corridor over the past week — nearly 10% of its 430,000 population. Other fleeing residents arrived by train Sunday in Lviv.

What of the art school?

Details remain few in the immediate aftermath, but Zelenskyy said on Monday that about 400 civilians were taking shelter at the art school in Mariupol when it was struck.

There was no immediate word on casualties in the attack, which The Associated Press could not independently verify.

"They are under the rubble, and we don’t know how many of them have survived," Zelenskyy said in a video address early Monday. "But we know that we will certainly shoot down the pilot who dropped that bomb, like about 100 other such mass murderers whom we already have downed."

The strike follows a pattern of attacks on civilian refuges, after Russian forces on Wednesday also bombed a theater in Mariupol where civilians took shelter. The authorities said 130 people were rescued from the Donetsk Academic Regional Drama Theater but many more could remain under the debris.

What was Russia's offer to Mariupol?

Russian forces demanded that the Ukrainian troops defending the strategic port lay down arms and in exchange would be guaranteed a safe exit from the city via humanitarian corridors.

Col. Gen. Mikhail Mizintsev said that Russia will wait until 5 a.m. Monday for a written Kyiv’s response to the proposal, but didn’t say what action Russia will take if its "humanitarian offer" is rejected.

Leaders, including Ukraine’s Deputy Prime Minister Iryna Vereshchuk and Mariupol Mayor Piotr Andryushchenko quickly rejected the notion. Vereshchuk said in remarks carried by Ukrainska Pravda news outlet that Kyiv already had told Russia that "there can be no talk about surrender and laying down weapons."

Previous bids to allow residents to evacuate Mariupol and other Ukrainian cities have failed or have been only partially successful, with bombardments continuing as civilians sought to flee.

What is happening in other cities in Ukraine?

In the Black Sea port of Mykolaiv, a Russian missile strike on a marine barracks Friday killed at least 40 Ukrainian troops, Mayor Oleksandr Senkevich said in televised remarks. The missiles were fired from the neighboring Kherson region, he said.

Authorities in the eastern city of Kharkiv said at least five civilians were killed in the latest Russian shelling, with the victims including a nine-year-old boy. Kharkiv has been under siege since the start of the Russian invasion and faced relentless Russian artillery.

Some 70 orphaned babies were evacuated from Sumy, another Ukrainian city under siege, in the northeast. The region’s governor said most of the infants require constant medical attention and will be taken to an unspecified foreign country.

In Kyiv, at least 20 infants carried by Ukrainian surrogate mothers were stuck in a makeshift bomb shelter, waiting for parents to enter the war zone to pick them up. They are being cared for by nurses trapped in the shelter by constant shelling from Russian troops.

Zelenskyy said 7,295 Ukrainians were evacuated from zones of combat on Sunday, including nearly 4,000 from Mariupol.

What did Pope Francis say?

In some of his strongest words yet since Russia’s invasion on Feb. 24, Francis on Sunday told thousands of people in St. Peter’s Square that every day brings more atrocities in what is a "senseless massacre."

"There is no justification for this," Francis said, in an apparent reference to Russia, which sought to justify its invasion as vital for its own defense. But Francis again stopped short of naming Russia as the aggressor. Pontiffs typically have decried wars and their devastating toll on civilians without citing warmongers by name.

"I feel great pain for those who don’t even have the chance to escape,’’ the pope added.

Are there new military developments?

The Russian military reported Sunday that it has carried out a new series of strikes on Ukrainian military facilities with long-range hypersonic and cruise missiles, a day after announcing it had used its latest hypersonic missile for the first time in combat.

Russian Defense Ministry spokesman Maj. Gen. Igor Konashenkov said the Kinzhal hypersonic missile hit a Ukrainian fuel depot in Kostiantynivka near Mykolaiv. The strike marked the second day in a row that Russia used the Kinzhal, a weapon capable of striking targets 2,000 kilometers (1,250 miles) away at a speed 10 times the speed of sound.

How are Ukrainian refugees faring?

At church services across Europe on Sunday, Ukrainians prayed for peace in their war-torn country. From Germany to Romania to Moldova, newly arrived refugees mingled with long-time members of Europe’s 1.5 million-strong Ukrainian diaspora at houses of worship.

Thousands of refugees from Ukraine waited in long lines in the Polish capital of Warsaw on Saturday to receive local identification papers that will allow them to move on with their lives.

Refugees started lining up by Warsaw’s National Stadium overnight to get the coveted PESEL identity cards that will allow them to work, go to school and get medical care or social benefits for the next 18 months.

Poland has taken in more than 2 million refugees from Ukraine — the bulk of more than 3.38 million people that the U.N. says have fled since Russia invaded Ukraine on Feb. 24. Hundreds of thousands have streamed into Hungary, Slovakia, Moldova and Romania.

How many civilians have died in Ukraine?

That's hard to say, with full casualty figures difficult to confirm during wartime. From the start of the war through Friday, the Office of the U.N. High Commissioner for Human Rights (OHCHR) recorded 2,246 civilian casualties in the country, including 847 killed and 1,399 injured.

Ukrainian officials say thousands of civilians have been killed.