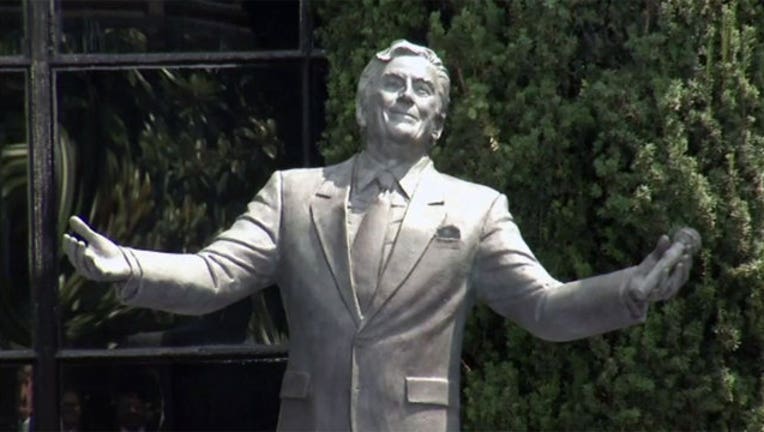 Bennett looked sharp in a blue suit as he shook hands with the crowd. Hundreds of people are gathered outside the Fairmont Hotel to celebrate Bennett's 90th birthday with the unveiling of an 8-foot-tall bronze statue of the singer atop Nob Hill.

"He's San Francisco," said Marty Jewett, standing in the front row with her friend, also a huge Bennett fan. "I think he keeps all the generations within his repertoire. I love his voice and his longevity.

For as long as anyone can remember, the New Yorker has been giving to the city where he first sang "I Left My Heart in San Francisco" at the Fairmont Hotel in 1961.

And now, the city is set to pay him back.

In recognition of the internationally renowned singer, painter and civic treasure the city is honoring him with several tributes marking his birthday, starting with a public dedication and unveiling of the statue.

The celebration will continue Friday evening at AT&T Park when the San Francisco Giants will honor Bennett in a pre-game ceremony and throughout the game. Bennett will also perform "I Left My Heart in San Francisco" for the fans.

"When the cable cars broke down and were closed down for two years and we brought them back, he came. When we had the earthquake and we put the Bay Bridge back together, he came. He's always here for us so we thought, 'What can we do for him?' And we thought of the statue," said Charlotte Mailliard Shultz, the chief of protocol for San Francisco and the State of California.

In addition to the fanfare Friday and a gala dinner on Saturday night, Bennett is getting his own ice cream flavor. Created by the city's Humphry Slocombe ice cream shop, the flavor "Duet" will feature vanilla ice cream swirled with limoncello sorbet and fennel biscotti to honor Bennett's Italian heritage.

But the centerpiece of the celebration will be the statue, which San Francisco Bay Area sculptor Bruce Leslie Wolfe began creating a few months ago after Bennett sat for him for three days. During that time, Wolfe said they laughed, played music and Bennett sketched his likeness, giving him a new appreciation for the crooner.

"Tony Bennett is probably the best vocal singer that I've ever heard. He can do anything with words," Wolfe said. "He's just like a poet, he's just good."