Steve Paulson says it's still going to be extremely hot with smoky and hazy skies.

SAN FRANCISCO - Downtown San Francisco on Sunday set a record for the day with a high of 100 degrees smashing the previous mark by 5 degrees and meteorologists said more excessive heat is in store for Labor Day. Still, California avoided major power outages that were threatened because of the soaring mercury.

“By our calculations, over 99% of California’s population is under an Excessive Heat Warning or Heat Advisory today,” the weather service in Sacramento tweeted Sunday afternoon.

San Francisco wasn't the only city to set records. Oakland reached 102 degrees, Santa Cruz reached 104 and Gilroy reached 112 degrees, as a few examples of temperatures that hadn't been reached before on a Sept. 6. 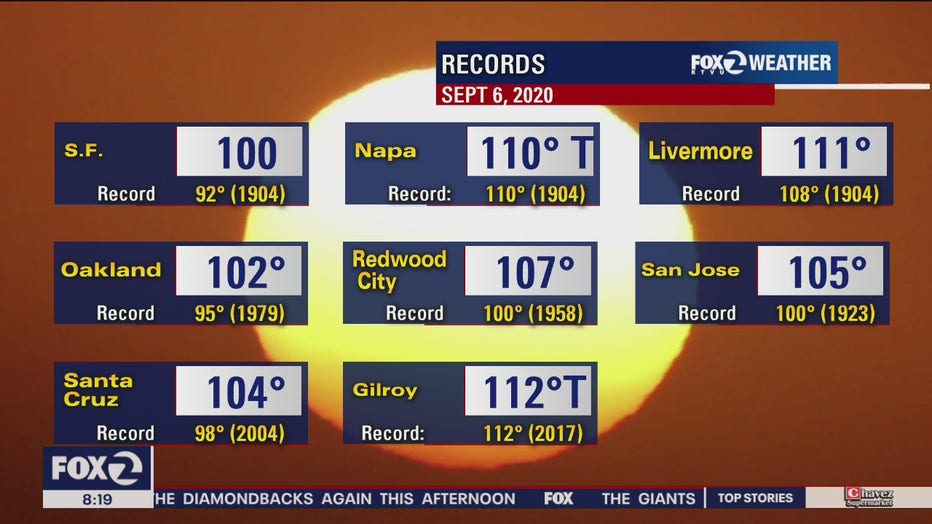 The exceptionally hot temperatures were driving the highest power use of the year, and transmission losses because of the wildfires have cut into supplies. Eric Schmitt of the California Independent System Operator that manages the state’s power grid said up to 3 million customers faced power outages if residents didn’t curtail their electricity usage.

About 7 p.m., the California Independent System Operator declared an emergency and said power outages were imminent because a transmission line carrying power from Oregon to California and another in-state power plant went offline unexpectedly. The cause of the outages is unknown at this time, the agency said.

But about 8:30 p.m., the agency issued a tweet calling off the emergency “thanks to conservation of Californians!” It said no power outages were ordered by operators of the grid.

Pacific Gas & Electric, the state’s largest utility, warned customers that it might cut power starting Tuesday because of expected high winds and heat that could create even greater fire danger. Some of the state’s largest and deadliest fires in recent years have been sparked by downed power lines and other utility equipment. The Flex Alert is being issued from 3 p.m. to 9 p.m.

On Monday, Cal Fire spokesman Daniel Berlant said overall this year, wildfires have burned more than 2 million acres, which have resulted in eight deaths and more than 3,300 structures destroyed.

And he noted that much of California is currently under a Red Flag Warning for strong, gusty winds and low humidity.  Northern California, including the Bay Area, and the southern mountains of Santa Barbara and Ventura Counties as well as the Eastern Sierra and Mojave Desert are expecting critical fire weather Monday evening.

The Inland Empire down into San Diego are under a fire weather watch for critical fire weather expected Tuesday into Wednesday.

Temperatures in the Bat Area should cool down a bit by Tuesday.