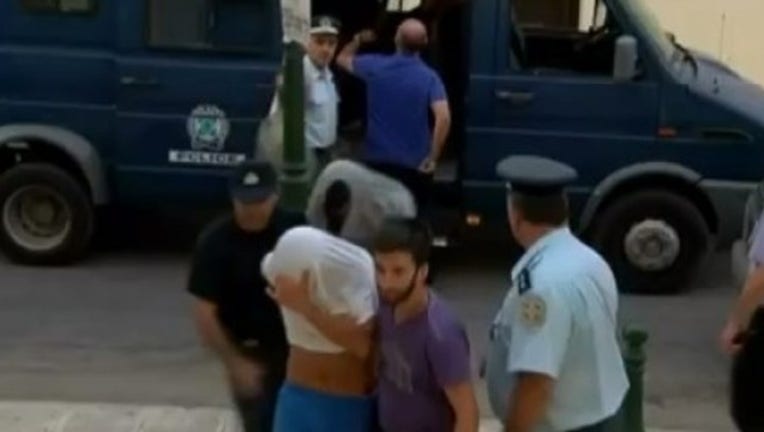 ATHENS, Greece (AP) - Five of nine men suspected in the beating death of a 22-year-old American tourist outside a bar in Greece are appearing before an investigating magistrate on the island of Zakynthos.

The nine - one Greek, seven Serbs and one British citizen of Serb origin - have been charged with intentional homicide in the death of Bakari Henderson of Austin, Texas, who died early July 7 after being beaten by a group of men outside a bar in Zakynthos' rowdy tourist area of Lagana.

Five of the suspects, including the Greek, were testifying before the investigating judge Wednesday, while the other four are scheduled to appear on Thursday. The judge will make a decision for each man on whether to set bail or to remand them in custody pending trial.

Separately, security camera footage showing the beating was shown by several Greek media outlets. The footage, apparently from a camera in a nearby store, shows Henderson running and being pursued by a group of people.

One man tackles him, throwing him onto a parked car before others join in the beating. Some in the group around Henderson attempted to stop the others from beating him, and eventually do. Greek police have confirmed the video is genuine.

Corrects the number of Serbs to seven, not eight.