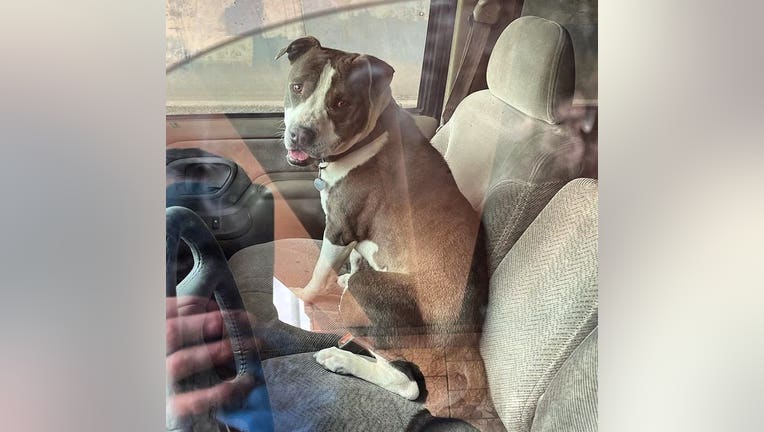 EL PASO, Texas - A dog in Texas has been recognized as a hero for saving his owner’s life.

The El Paso Fire Department (EPFD) and El Paso Animal Services honored Astro, an American pit bull terrier, with a medal and a dog-safe cake on Friday, to celebrate the pooch’s bravery, according to KTSM.

Last week, Astro reportedly alerted a neighbor when his owner experienced a medical emergency, fire department officials posted on social media -- though at the time, officials got his name wrong and called him Cosmo.

"The smart pup immediately went to look for help," the EPFD wrote on Facebook. "A good samaritan saw [Astro] and tried to get closer, [Astro] led them to his owner, and 911 was called. Thanks to this, Pumper 15 and Rescue 31 were able to assist and transport the patient, saving his life."

During the ceremony on Friday, EPFD spokesperson Enrique Duenas-Aguilar said Astro was critical for saving his owner’s life.

"He started barking, he started running around," Duenas-Aguilar said, per KTSM. "And that’s when a good samaritan saw him. He decided to get closer, thinking the dog was in trouble, but then Astro would keep moving until eventually, he led the person to the patient."

"Without his help, the patient might have never been found," Duenas-Aguilar added. Astro even tried to get into the ambulance with his owner, according to Duenas-Aguilar.

"Not only was he a friend but he was there to help when his owner needed him the most," Ramon Herrera, El Paso Animal Services’ interim director said at the ceremony, per KTSM.

"He really set an example for dogs that look just like him," he added. "Astro is definitely a pit bull and that is one of the main breeds you find in many shelters."

Astro’s owner, Bertha Martinez, told KTSM she and her family were surprised by their pet’s heroism. According to the station, Astro hadn’t been trained to alert others in emergencies.

"We never thought in a million years he’d do something like that," Martinez said.

In fact, when they adopted Astro, a stray, about a year ago after seeing him roaming the streets. Martinez said she was afraid of pit bulls at the time and wasn’t sure if they would keep him for long.

"If you treat him well and don’t harm them or anything then they become what he is," Martinez told the station.