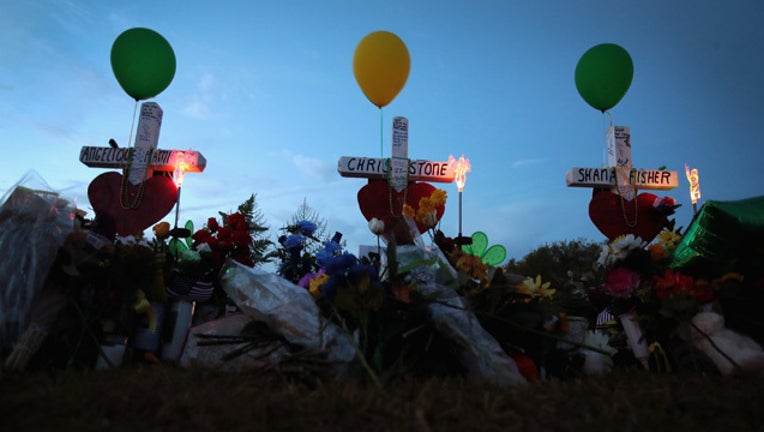 Crosses line the lawn in front of Santa Fe High School on May 21, 2018 in Texas. The crosses are a memorial to the victims of the May 18 shooting when a 17-year-old student entered the school and opened fire, killing 10. (Scott Olson/Getty)

The family of one of the students killed in a Texas high school shooting filed a lawsuit Thursday against the suspect's parents, claiming the father didn't properly secure weapons and the parents were negligent in entrusting their son with firearms. Christopher Stone and Rosie Yanas, whose son Chris Stone, 17, was killed, filed the lawsuit in Galveston County. Stone's funeral was Friday.

Authorities have charged Dimitrios Pagourtzis, 17, a Santa Fe High School student, with capital murder in the May 18 attack that killed eight students and two substitute teachers. Investigators said Pagourtzis used a shotgun and pistol belonging to his father that had been kept in a closet.

Texas law states that guns can't be made accessible to minors, with exceptions such as hunting or when under parental supervision. Parents can be charged with a misdemeanor punishable by up to one year in jail and $4,000 in fines if the child fires a weapon and causes serious injury or death.

Texas law also requires gun owners to "take steps that a reasonable person would take to prevent the access to a readily dischargeable firearm by a child, including but not limited to placing a firearm in a locked container or temporarily rendering the firearm inoperable by a trigger lock or other means."