AUSTIN, Texas - The Texas Supreme Court will hear arguments Thursday in a narrow challenge to the state’s new abortion law, which has blocked access to the procedure after about six weeks of pregnancy for nearly six months.

This hearing before the state high court is an interim step in the ongoing federal lawsuit brought by abortion providers trying to challenge the law. The 5th U.S. Circuit Court of Appeals has asked the Texas Supreme Court to weigh in on a question of state law before the appeals court proceeds with its ruling.

The law, originally passed as Senate Bill 8, is designed to evade judicial review, a goal at which it has so far been successful. The law specifically precludes state officials from enforcing it, instead deputizing private citizens to bring civil lawsuits against anyone who "aids or abets" an abortion after fetal cardiac activity is detected, usually around six weeks of pregnancy.

Abortions fell 60% in Texas in the first month after the state's restrictive new abortion law went into effect. That's according to new data from the Texas Health and Human Services Commission.

Lawyers representing the abortion providers have sought to prove that there is state enforcement, which would give them an avenue to seek an injunction to stop the law from being enforced. They argued that the law is enforced by court clerks who docket the lawsuits, judges who hear them, the state’s attorney general and others.

The U.S. Supreme Court threw out most of those arguments in a December ruling that allowed the law to remain in effect. The justices did allow one question to proceed, over whether state medical licensing officials play a role in enforcing the law.

These agencies would potentially be responsible for disciplining or revoking the licenses of doctors, nurses and pharmacists who violate the law; an injunction would stop them from doing so, but would leave the crux of the law in place.

The U.S. Supreme Court threw this question back to the lower courts. The 5th U.S. Circuit Court of Appeals then threw it to the Texas Supreme Court for an interpretation of state law, a move the abortion providers decried as adding unnecessary delays.

FOX 7 Discussion: Will the Supreme Court overturn Roe vs. Wade?

Lawyers for the state argue that the law clearly states that public officials cannot enforce the abortion restriction, and thus, the U.S. Supreme Court erred in allowing this question to proceed through the courts.

"The Legislature did not go to such lengths to specify that SB 8 may be enforced only through private civil actions merely to allow ‘indirect enforcement’ of SB 8 through various medical regulatory statutes," wrote Texas Solicitor General Judd Stone in a brief filed with the state Supreme Court earlier this month.

John Seago, legislative director of the prominent anti-abortion group Texas Right to Life, said that while his organization hopes the Texas Supreme Court issues a "more clear, true reading" of the law, he is not too worried about the outcome of this hearing.

Abortion providers and advocates are fighting this law on several fronts, including in state court, where a judge in Austin declared the law unconstitutional. He did not enjoin the law from being enforced, though, and that ruling is currently being appealed. 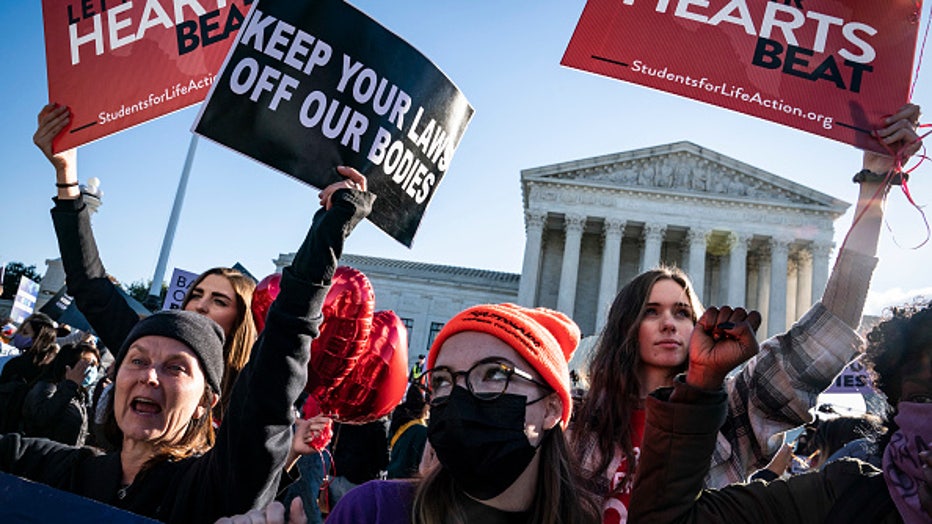 WASHINGTON, DC - NOVEMBER 1: Pro-life and pro-choice protestors gather outside the Supreme Court as arguments begin about the Texas abortion law by the court on Capitol Hill on Monday, Nov. 01, 2021 in Washington, DC. (Photo by Jabin Botsford/The Was