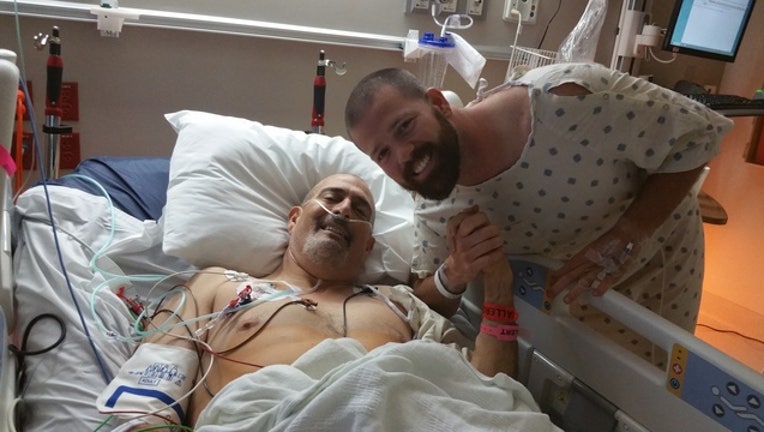 FOX 7 evening anchor Rebecca Thomas speaks out about a local Veteran fighting for the VA to cover the cost of his Kidney Transplant.  This procedure saved Rebecca's mothers life. She had this to say:

Having donated a kidney to my mother six months ago, I very much understand what the Nelson family is going through medically.

But, they have been put through an emotional wringer – my mother and I were fortunate enough not to have had to endure.

Charles Nelson is a 100-percent service-connected disabled Army veteran, whose kidney disease was caused by an untreated strep infection while he was stationed in South Korea.

He’s also enrolled in the VA’s Choice Program – established by the Veterans Access, Choice, and Accountability Act of 2014.

Because Charles Nelson lives in Leander, more than 40 miles from a VA transplant center, the Choice Program was supposed to pay for the living kidney donor transplant surgery.

As with all living donor transplant surgeries – the recipient’s insurance picks up the donor’s tab. But, about a month before the surgery, the VA told Charles Nelson the Choice Program would not cover the surgery because the donor wasn’t a veteran.

The only way the VA would “pay” for the surgery if the Nelsons went to one of two VA Hospitals in the nation that perform living kidney donor transplants: Portland or Nashville.

Clearly, that would have been an undue financial and travel burden on the family – when they legally have access to that procedure in their home state, where they have a support system in place.

So, Charles Nelson turned to Medicare to pay for his life-saving surgery – but, he shouldn’t have had to go that route.

He and his family should not have had to worry about how they were going to pay for the surgery.
The Choice Program was put in place for this very reason – reduce wait times, travel burdens and get veterans the healthcare they deserve!

This story was not to pressure the VA into using the Choice Program to pay for transplants “because it’s the right thing to do” – but, rather because it’s the law and the VA is violating it, as stated by the Chairman of the U.S. House Committee on Veterans’ Affairs, Rep. Jeff Miller:

For weeks, I tried to get answers from the VA about its policy for paying for living kidney donor transplants.
But, the VA’s public affairs representatives are there to protect the VA – not to help expose any wrongdoing.
So, I’ve never received any straightforward answers – just rosy, canned statements like this:

The only “viable solution” for the VA was for them to use the Choice Program and pay for the Nelson’s transplant surgery.

On June 8th, the VA finally admitted to me they would not be paying for the Nelson’s surgery because: “To be eligible for Choice a person must be an enrolled veteran.”

That is the VA talking in circles - because Charles Nelson is an enrolled veteran and again, as Rep. Miller said, "It seems as if VA has created a technicality that doesn't exist, as basic common sense dictates that in cases of transplants, the donor's medical care is an essential part of the procedure.”

The only reason this wrongdoing by the VA has been brought to light, is because Charles Nelson has a strong wife – who is willing to stand up for him and advocate on behalf of him and all veterans.

Tamara Nelson helped me expose a grave injustice to our veterans – by the very agency created to help them.
Charles Nelson is just one veteran.

How many more veterans are there, who aren’t speaking out, whom are being failed by the VA and its refusal to fully utilize the Choice Program as intended?

FOX 7 has always been committed to helping our nations Veterans. For more than four years now evening anchor Mike Warren has been leading the FOX 7 Care Force.  The FOX 7 Care Force is a FOX 7 Feature that highlights the issues and struggles that our Veterans face. Mike had this to say...

For the last four years we've been on a crusade to help veterans in any way we can. Obviously as a TV station we mostly do this by telling veterans' stories and highlighting the issues they deal with as they transition from the military world to the civilian.

We've touched on myriad subjects, from living with PTSD to dealing with VA healthcare. Our aim is to help and assist through awareness. We strive to remind our viewers about the plight of our veterans and how their service to our country continues to affect us and them.

We think it's important to recognize and stay connected with them not just for a news cycle or two, but consistently every week month and year.

Speaking personally I've been humbled again and again by the wonderful people I've meet through the FOX 7 Care Force. So many veterans are deserving of our respect and when you cover their stories where they are not respected it is angering and frustrating to say the least.

At the same time when we can shine a light on a vet or a veteran issue and show our viewers something they may not have known or realized is the essence of what we are trying to do at the FOX 7 Care Force.