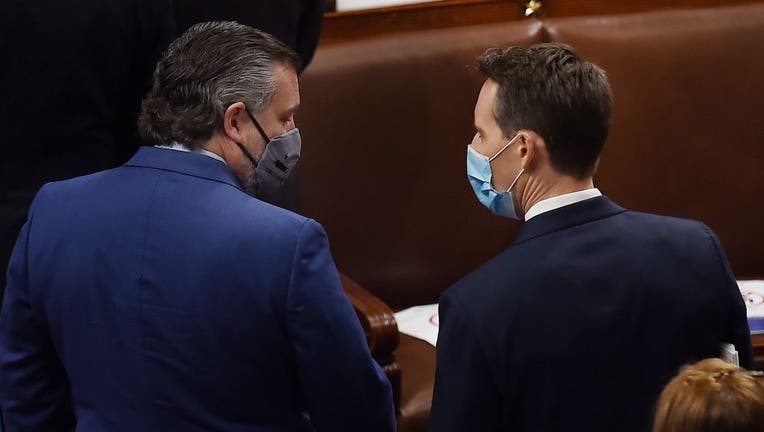 US Senator Ted Cruz (L), Republican of Texas, speaks with colleague Josh Hawley of Missouri during a joint session of Congress to count the electoral votes for US President at the US Capitol in Washington, DC, January 6, 2021. Photo by OLIVIER DOULIE

WASHINGTON - The third-ranking Democrat in the U.S. Senate is calling on Republican Sens. Josh Hawley and Ted Cruz to resign, arguing that their objections to the certification of President-elect Joe Biden’s victory "incited and supported the violent mob that attacked the Capitol."

Sen. Patty Murray of Washington state said Friday that there can be "no normalizing or looking away from what played out before our eyes this week."

Cruz, of Texas, and Hawley, of Missouri, were at the forefront of congressional efforts to object to the certification of Biden’s win over President Donald Trump. A violent mob stormed the Capitol as the process of objecting was underway, creating mayhem that left five people dead. Trump spoke at a large rally near the White House before the siege began.

Another Democrat, Sen. Joe Manchin of West Virginia, said one option for punishing Hawley and Cruz would be to hold them "in contempt, basically, for insurrection and high crimes."

He stopped short of saying Hawley and Cruz should be expelled from the Senate. But he said action should be taken to prevent "anyone with blind political ambition to supersede the protection and defense of our country."

Hawley says he "will never apologize for giving voice to the millions of Missourians and Americans who have concerns about the integrity of our elections."

Hawley and Cruz didn’t immediately respond to requests for comment.