A Georgia couple wanted to continue taking trips and long walks with their 16-year-old dog who had become immobile, so they created a specialized mobile dog bed just for their beloved Cocoa.

A Georgia couple came up with an innovative way to transport their elderly dog during her final months so she could still enjoy her favorite things — walks and family beach trips.

Many people who have dogs understand they are lifelong companions and when they finally reach an advanced age, an owner will do just about anything to accommodate them.

Tom and Lauren Antonino did exactly that for their 16-year-old Chesapeake Bay retriever, Cocoa."This is a simple story about love. She benefited and so did we," Lauren said in email correspondence. 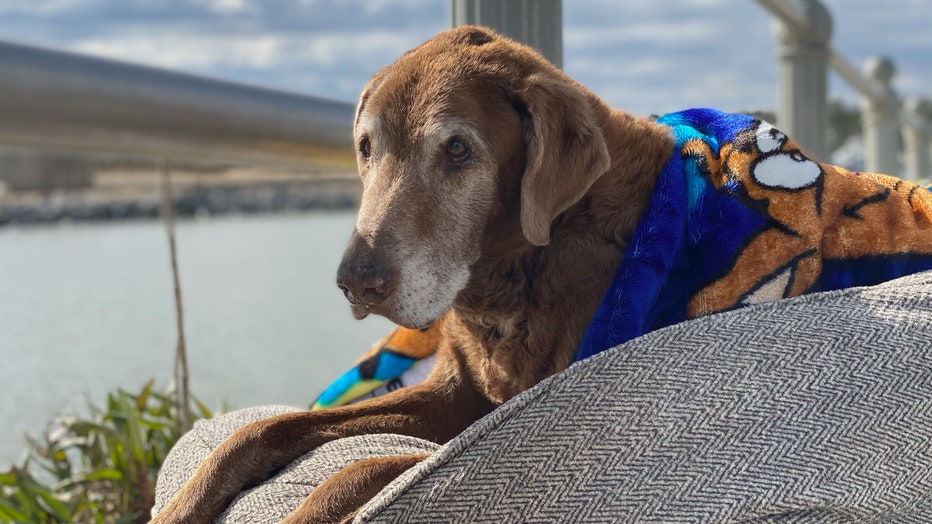 Cocoa on her mobile bed facing the beach. 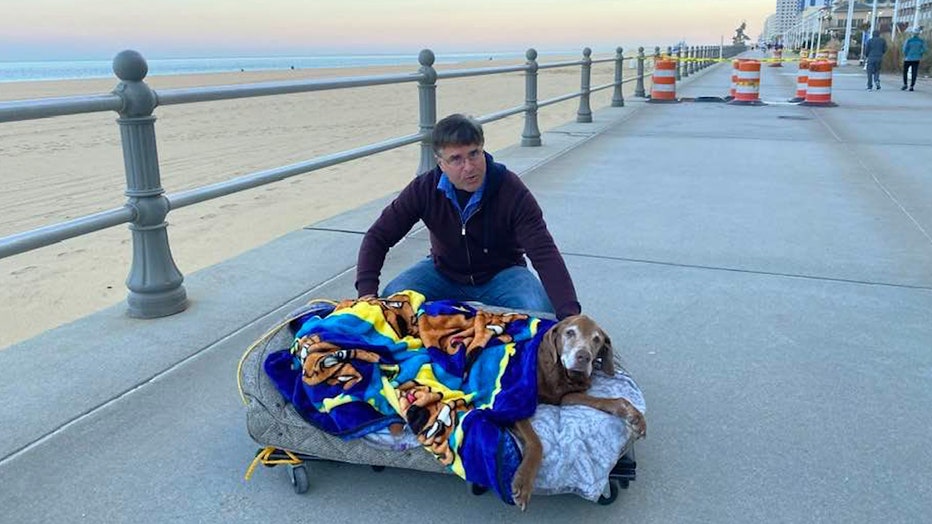 Tom and Cocoa out on a daily walk in Virginia Beach.

Lauren and Tom have had Cocoa since she was a puppy and since then, they’ve gone on many adventures together, visiting local breweries and going on beach trips.

"She enjoyed being out, loved music at Monkey Wrench in Suwanee, Georgia, and loved being with us. She also enjoyed sitting on our porch or on our lawn with our other dogs, Kimbal and Matcha and Frankie (kids' dogs who visit often)," Lauren wrote.

But like most dogs who get older, walking became difficult for Cocoa, and her parents didn’t want to deprive her of her love for traveling — so the couple got creative. 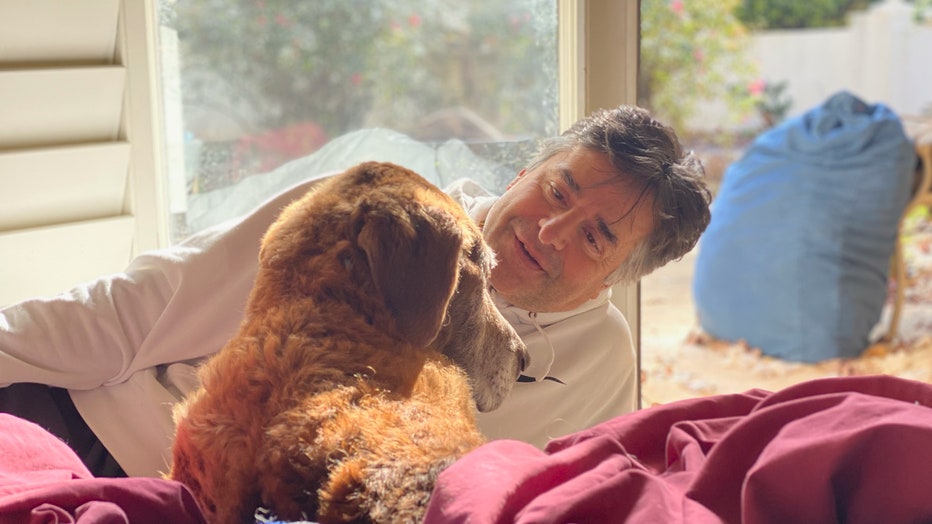 Cocoa and Tom laying in the sun.

"Cocoa had not walked since last August, but she was not in pain," Lauren continued. "It was Tom's idea to buy a wide-body mechanic's creeper (kind of like the thing mechanics use to slide underneath cars) to help move her. I was going to be taking care of her at that time by myself while he was out of town and I could not carry her like he could. We then bought an Orvis dog bed that we put on top of the creeper and we were mobile," Lauren said.

During a trip to Virginia Beach in late January, a local resident, Carrie Copenhaver, saw Tom and Cocoa on one of their daily walks and was intrigued when she saw the mobile bed.

After Copenhaver learned the reason behind it, she was so moved by Tom’s love for his furry companion, she snapped a photo and shared it on Facebook. 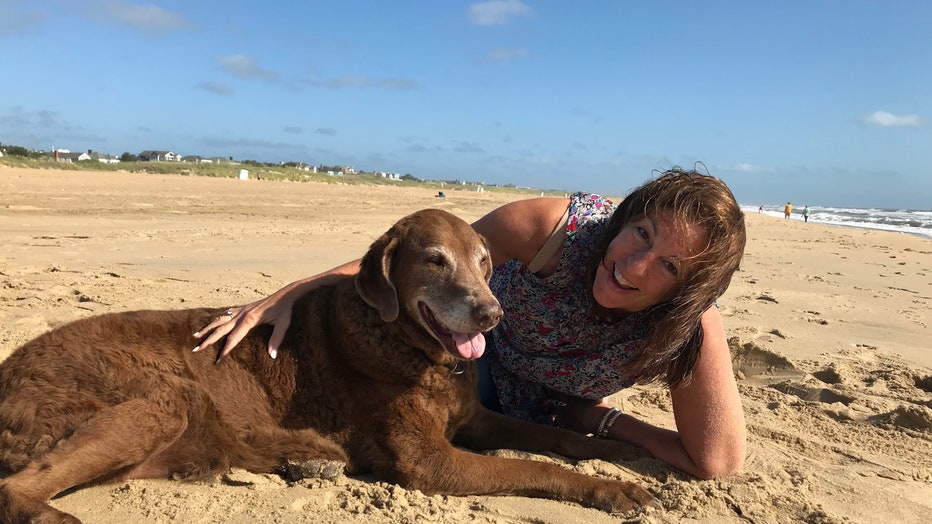 Cocoa and Lauren on the beach.

The post, which was shared in late February, garnered more than 55,000 shares and thousands of comments praising Tom and relating to the love he had for his best friend.

"I had to stop & express my love for his extraordinary care... compassion, kindness, love. I need more people like this in my life," Copenhaver wrote. 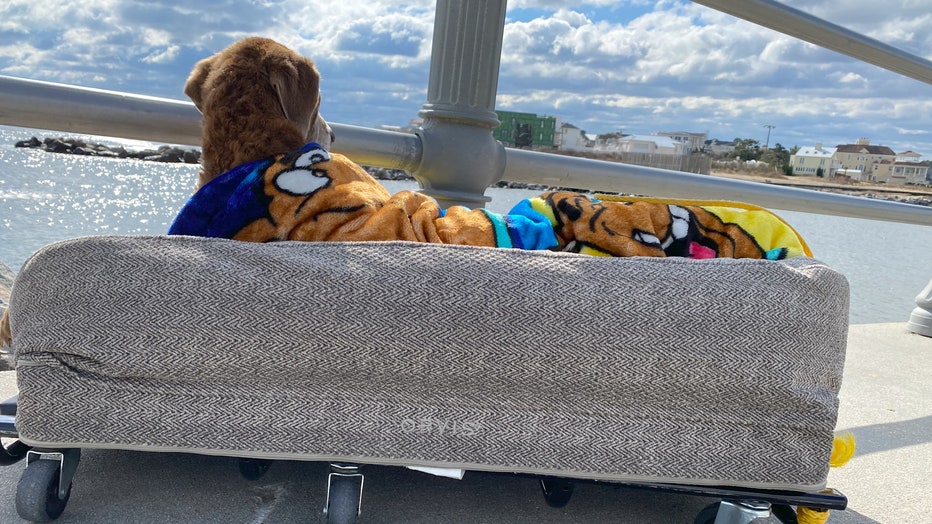 Cocoa on her mobile bed in Virginia Beach.

"When we were in Virginia Beach with Cocoa, Tom walked over 100,000 steps in a week on the boardwalk and nearby area. That man really knows what it means to take a dog for a walk," Lauren said.

Both Tom and Cocoa received lots of love from the locals in Virginia Beach, with one restaurant even footing the bill for Tom’s lunch and a treat for Cocoa.

"I think he and Cocoa had split the meal," Lauren said. 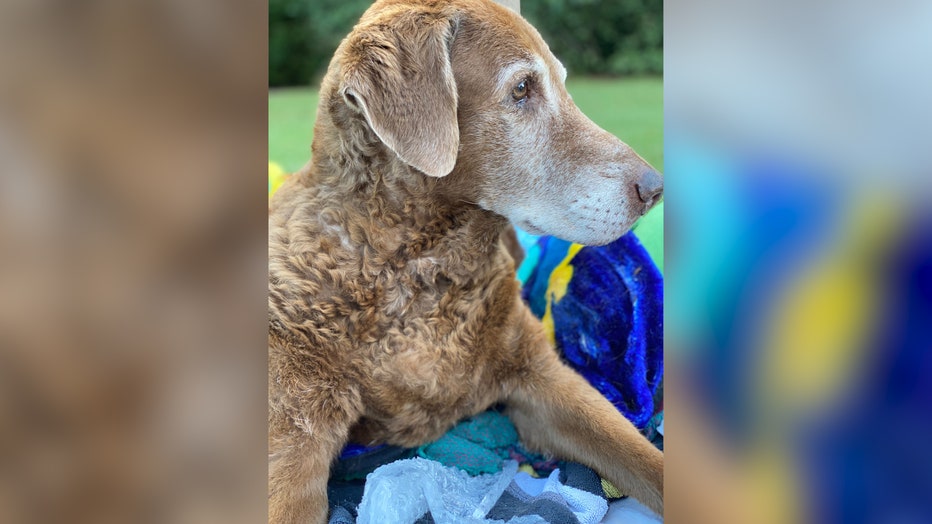 "Though the picture Carrie took shows her laying down, she often had her head up, looking like a lioness, enjoying the sniffs of fresh air and the sites of people and other dogs going by," Lauren added.

Cocoa passed away on March 5, but both Lauren and Tom are thankful for the memories they have of their beloved dog.

"We miss her dearly but are so grateful to have had her so long. We had hoped that we had more time with her still, but God had other plans," Lauren said. "We are glad to have been a part of the story. Cocoa is the star."