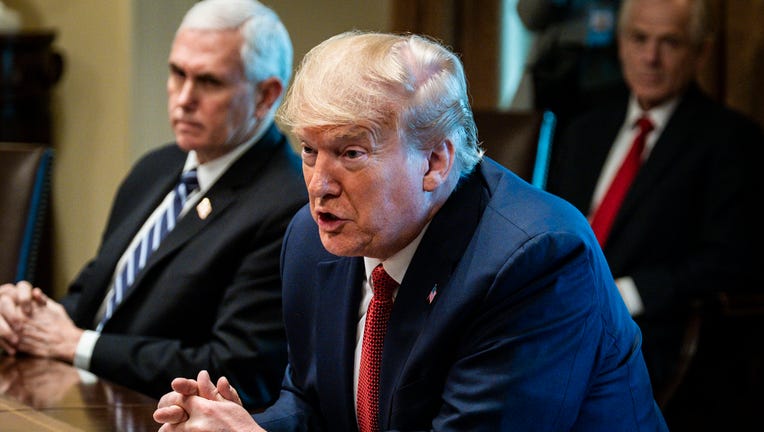 President Donald Trump meets with supply chain distributors in reference to the COVID-19 coronavirus pandemic, in the Cabinet Room in the West Wing at the White House on March 29, 2020. (Photo by Pete Marovich-Pool/Getty Images)

WASHINGTON (AP) - President Donald Trump on Wednesday threatened social media companies with new regulation or even shuttering a day after Twitter added fact checks to two of his tweets.

The president can’t unilaterally regulate or close the companies, which would require action by Congress or the Federal Communications Commission. But that didn't stop Trump from angrily issuing a strong warning.

Claiming tech giants “silence conservative voices,” Trump tweeted, “We will strongly regulate, or close them down, before we can ever allow this to happen.”

And he repeated his unsubstantiated claim — which sparked his latest showdown with Silicon Valley — that expanding mail-in voting “would be a free for all on cheating, forgery and the theft of Ballots.”

Trump and his campaign angrily lashed out Tuesday after Twitter added a warning phrase to two Trump tweets that called mail-in ballots “fraudulent” and predicted that “mail boxes will be robbed,” among other things. Under the tweets, there is now a link reading “Get the facts about mail-in ballots” that guides users to a Twitter “moments” page with fact checks and news stories about Trump’s unsubstantiated claims.

Trump replied on Twitter, accusing the platform of “interfering in the 2020 Presidential Election” and insisting that “as president, I will not allow this to happen.” His 2020 campaign manager, Brad Parscale, said Twitter’s “clear political bias” had led the campaign to pull “all our advertising from Twitter months ago.” Twitter has banned all political advertising since last November.

Trump did not explain his threat Wednesday, and the call to expand regulation appeared to fly in the face of long-held conservative principles on deregulation.

But some Trump allies, who have alleged bias on the part of tech companies, have questioned whether platforms like Twitter and Facebook should continue to enjoy liability protections as “platforms” under federal law — or be treated more like publishers, which could face lawsuits over content.

The protections have been credited with allowing the unfettered growth of the internet for more than two decades, but now some Trump allies are advocating that social media companies face more scrutiny.

“Big tech gets a huge handout from the federal government," Republican Sen. Josh Hawley told Fox News. “They get this special immunity, this special immunity from suits and from liability that’s worth billions of dollars to them every year. Why are they getting subsidized by federal taxpayers to censor conservatives, to censor people critical of China.”