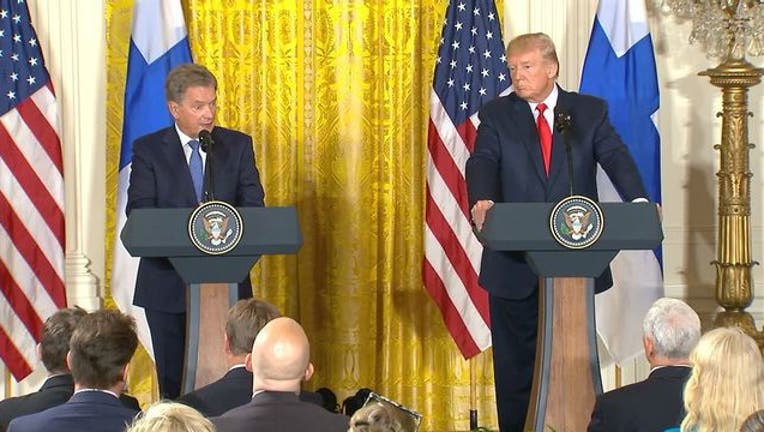 President Donald Trump (right) is joined by Finnish President Sauli Niinisto at the White House for a joint news conference.

WASHINGTON (AP) — President Donald Trump declined Monday to tag Russia as a security threat, saying he would put "many countries" in that category instead.

"I consider many countries as a security threat, unfortunately, when you look at what's going on in the world today," Trump said after a Finnish broadcaster asked specifically about Russia and whether the president would consider it a threat to security.

Trump's response was in keeping with a general reluctance to take a tough line against Russia, which U.S. intelligence agencies say interfered in last year's presidential election to try to benefit Trump. The Justice Department and congressional committees are investigating possible ties between Trump campaign associates and Russian government officials.

The president commented during a White House news conference with Finnish President Sauli Niinisto after they met in the Oval Office.

The Finnish broadcaster referenced Niinisto's concern about the security in the Baltic region and Russian planes flying there without transponders, which transmit information about their locations. The reporter asked Trump, "Would you consider Russia as a security threat?"

"We consider that a very, very important part of the world," Trump said, noting U.S. relationships with countries in the region. "And so I would consider many countries threats, but these are all threats that we'd be able to handle if we have to. Hopefully we won't have to handle them, but if we do we will handle them."

Trump declined the reporter's invitation to say how far the U.S. would go if the situation in Baltics escalated. "We are very protective of that region. That's all I can say," Trump said.

Trump also said he and Niinisto had a "very good discussion" about the Arctic and black carbon, a major component of soot that's damaging the Arctic ice.

Finland opposed Trump's decision to pull the U.S. out of an international climate change agreement. Finland recently inherited chairmanship of the advisory Arctic Council from the United States.

"I think we have much in agreement," Trump said. "We want crystal clean water and we want clean air, the cleanest ever."

Trump also said the U.S. stands in solidarity with Finland after a man stabbed eight people in the city of Turku earlier this month, killing two, before police shot and detained him.

Trump noted that Finland is respected by Russia and said he hoped the United States someday would have good relations with Russia, too.

"Finland is respected by Russia. Finland has been free of Russia, really — just about one of the few countries in the region that has been — for 100 years," Trump said. The Soviet Union invaded Finland in November 1939.

"And Russia has a lot of respect for Finland, so that's always good," Trump continued. "But I think Finland is doing fine with Russia, and I hope that the United States will someday be able to have a very good relationship with Russia also."

"I think that's very good for world peace and for other things," Trump added.