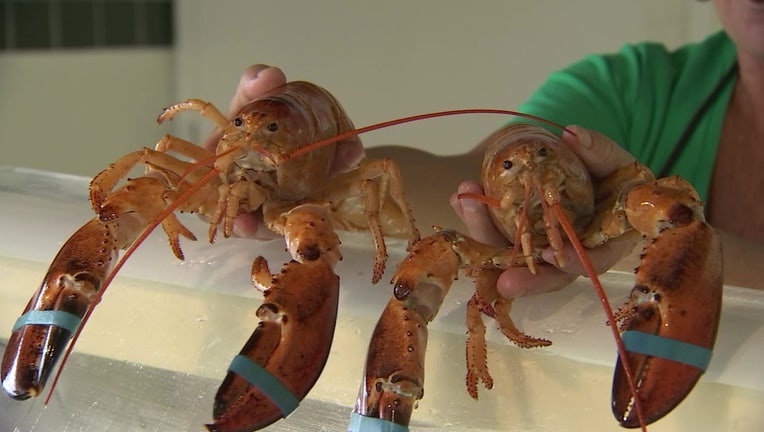 HUDSON, Fla. - Whitney's Seafood Market in Hudson gets a shipment of lobsters delivered twice a week from Maine.

But Monday's delivery came with a rare surprise: not one, but two orange-colored lobsters.

The pair stood out easily among the rest of the pack.

Most lobsters are a muddy color, which helps them blend into their environment and protect them from predators. But rare lobsters can be found in a variety of colors, including blue, white, and orange.

Talk about a catch of a lifetime! A Maine lobsterman scored a 1-in-100 million catch: A rare cotton candy shaded lobster. The lobster, caught in Maine’s Casco Bay in Nov. 2021, features an iridescent, opal-like shade on its shell, a result of a genetic mutation that creates unique colorings.

According to the Maine Lobstermen's Community Alliance, your chance of finding a lobster is about one in two million, while the rarest lobster is white — with the odds of finding one at only one in 100 million.

The chances of finding an orange lobster, meanwhile, is said to be one in 30 million — making the discovery at Whitney's Seafood Market all the more remarkable. 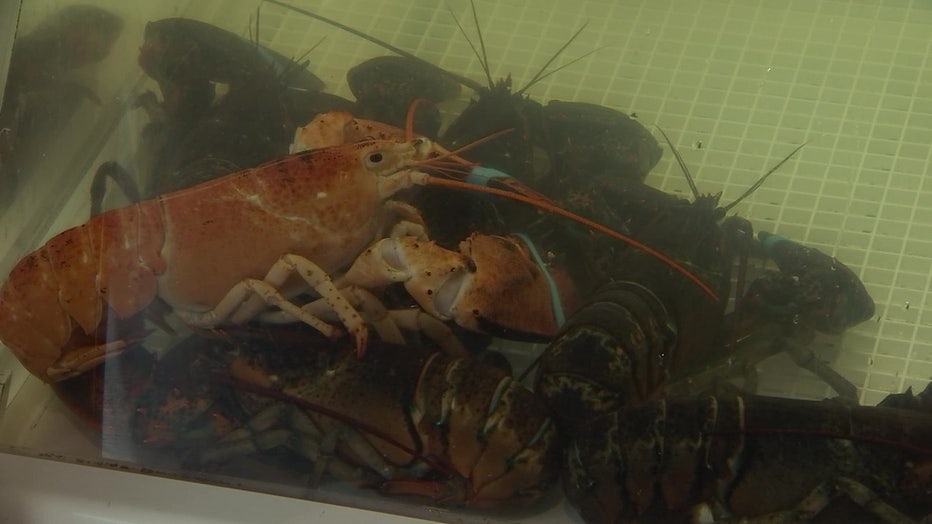 One of the two rare orange lobsters that were found in the same shipment to Whitney's Seafood Market in Hudson, Florida.

However, it comes on the heels of two other recent orange lobster finds, which is leading researchers to question if the brightly colored lobsters aren't as rare as they've been thought to be.

Last month, a bright orange lobster was rescued from a Red Lobster restaurant in South Florida, earning the nickname "Cheddar" after the chain's biscuits. Cheddar was then sent off to Ripley's Aquarium in South Carolina to be protected from predators — and from the dinner plate. 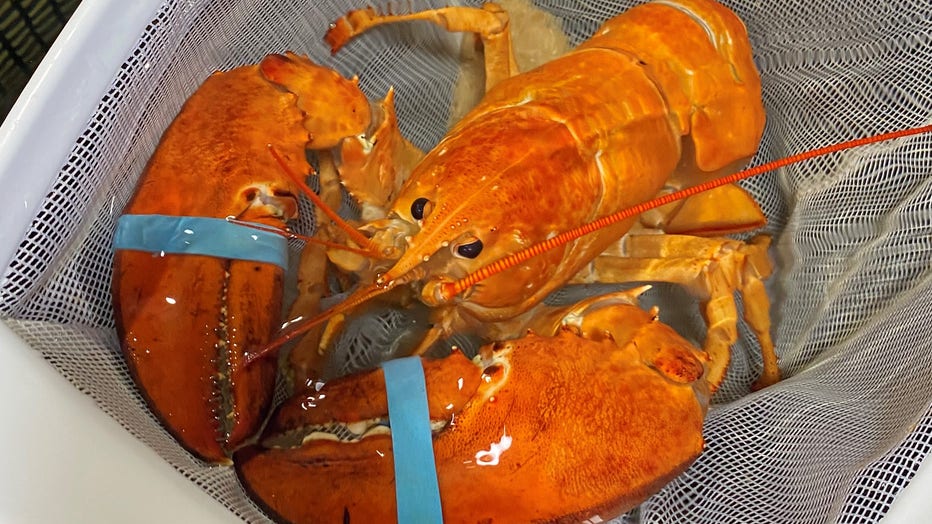 A few weeks later, a second orange lobster was found at another Red Lobster restaurant in Mississippi. This one earned the name "Biscuit," and was sent to Ripley's Aquarium of the Smokies in Tennessee.

"Orange lobsters are uncommon but perhaps not as rare as we first thought," said Ripley's Aquarium of the Smokies Director of Husbandry, Jared Durrett, in a statement. "Lobsters obtain their color through the pigments they ingest in their diet. If these orange lobsters are being harvested from the same region, perhaps their localized diet contains a pigment that, when paired with the lobster's genetics, creates the orange coloration we are seeing." 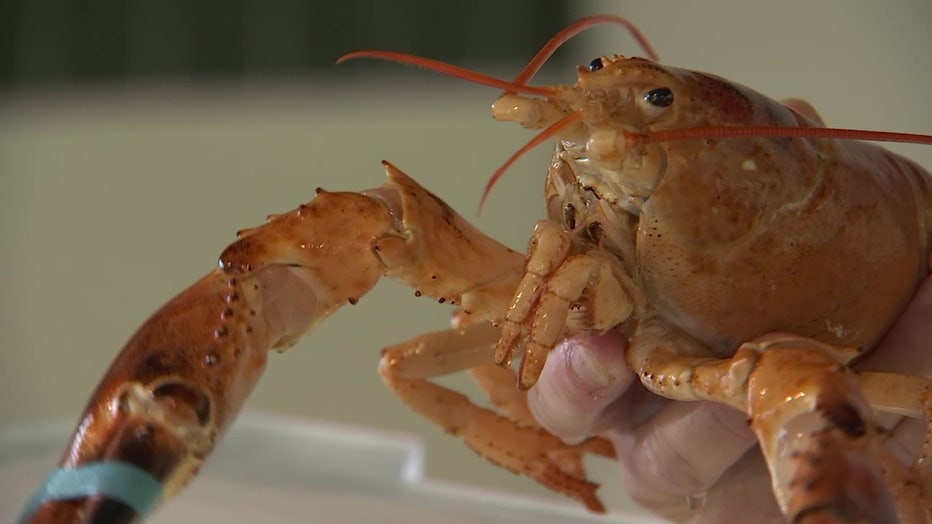 One of the two rare orange lobsters that were found in the same shipment to Whitney's Seafood Market in Hudson, Florida.

Red Lobster later confirmed that both Cheddar and Biscuit had been harvested from the same fishing area. Ripley's and Red Lobster are now partnering to collect data from local fishermen to see if the unusual coloring is indeed based on what the lobsters are eating.

As for the two orange lobsters found in the Tampa Bay area, the owners of Whitney's Seafood Market tell FOX 13 they've named the pair "Sonny" and "Cher." 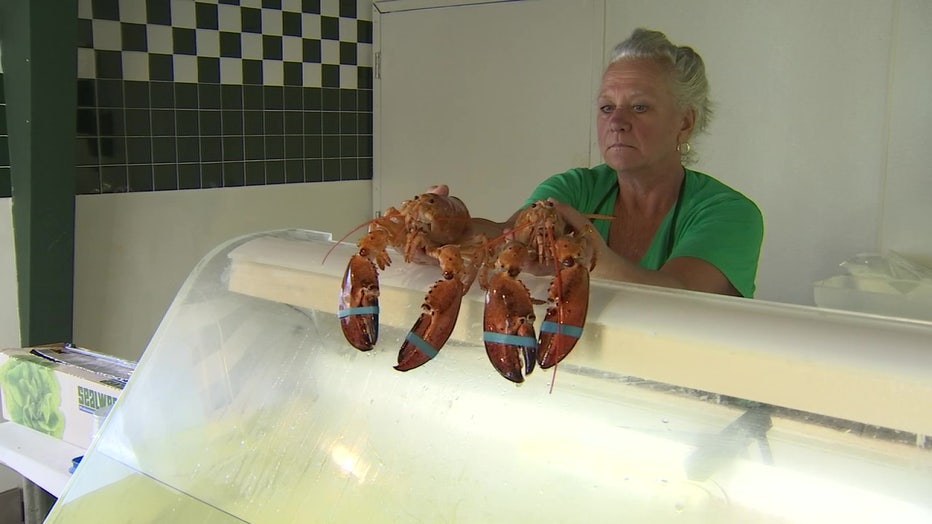 Whitney said in her 13 years of working with lobsters, this is the first time she's ever seen one orange lobster, let alone two.

Whitney said the crustaceans were saved from the steamer and will live out the rest of their days at the Clearwater Marine Aquarium, which is building a habitat for the pair.

FOX Weather contributed to this report.