Video from a de-occupied Ukrainian village shows the damage left behind by six months of fighting after Russia's invasion. Credit: Maria Avdeeva via Storyful

KYIV, Ukraine - Russia’s Defense Ministry announced Saturday that it's pulling back troops from two areas in Ukraine’s eastern Kharkiv region where a Ukrainian counteroffensive has made significant advances in the past week.

The news came after days of apparent advances by Ukraine south of Kharkiv, the country’s second-largest city, in what could become the biggest battlefield success for Ukrainian forces since they thwarted a Russian attempt to seize the capital of Kyiv at the start of the nearly seven-month war.

Russian Defense Ministry spokesman Igor Konashenkov said Saturday that troops would be regrouped from the Balakliya and Izyum areas to Ukraine's tern Donetsk region. Izyum was a major base for Russian forces in the Kharkiv region and earlier this week social media videos showed residents of Balakliya joyfully cheering as Ukrainian troops moved in.

Konashenkov said the Russian move is being made "in order to achieve the stated goals of the special military operation to liberate Donbas,’" one of the eastern Ukraine regions that Russia has declared sovereign.

The claim of pullback to concentrate on Donetsk is similar to the justification Russia gave for pulling back its forces from the Kyiv region earlier this year when they failed to take the Ukrainian capital. 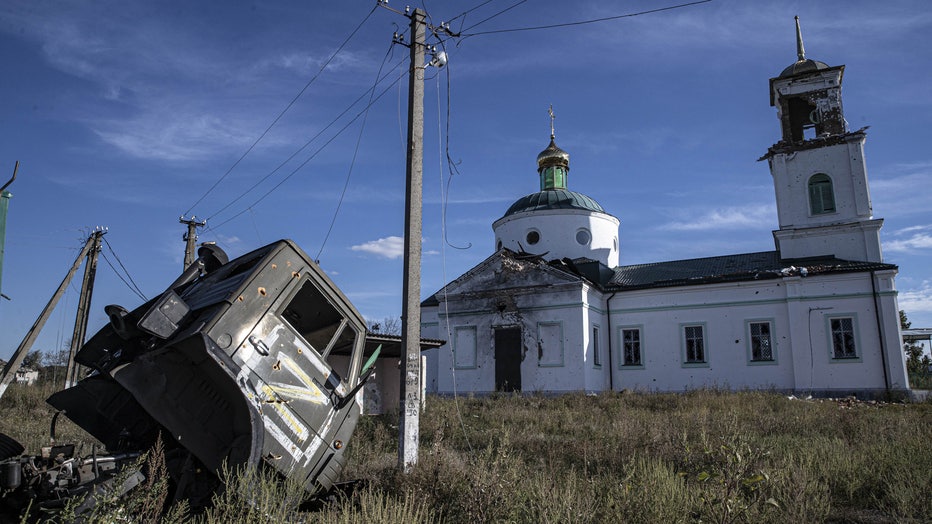 A damaged church is seen in Grakove village after the Ukrainian forces took control of the village in Kharkiv, Ukraine on September 09, 2022. (Photo by Metin Aktas/Anadolu Agency via Getty Images)

Ukrainian Foreign Ministry spokesman Oleh Nikolenko also suggested the Ukrainian troops had retaken Kupiansk, a town along the main supply route to Izyum, long a focus on the Russian front line and the site of heavy artillery and other fighting. Nikolenko tweeted a photo showing soldiers in front of what he said was a government building in Kupiansk, 73 kilometers (45 miles) north of Izyum.

The Ukrainian Security Service of Ukraine hours later posted a message which it said showed its forces in Kupiansk, further suggesting it had been seized by Ukrainian troops. The Ukrainian military didn't immediately confirm entering the town, a railway hub that Russia seized in February.

Videos on social media appeared to show Ukrainian forces on the outskirts of Izyum at a roadside checkpoint. A large statue with the city’s name could be seen in the footage. Ukrainian forces did not acknowledge holding the city.

Earlier Saturday, the British Defense Ministry told reporters it believed the Ukrainians had advanced as much as 50 kilometers (30 miles) south of Kharkiv, and described Russian forces around Izyum as "increasingly isolated."

"Russian forces were likely taken by surprise. The sector was only lightly held and Ukrainian units have captured or surrounded several towns," the British military said, adding that the loss of Kupiansk would greatly affect Russian supply lines. 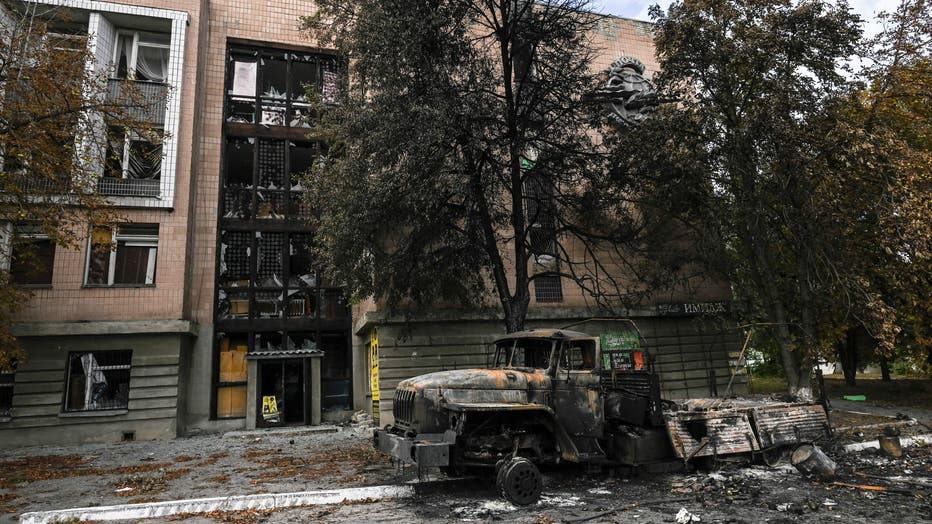 The Institute for the Study of War, a Washington-based think tank, likewise referenced sweeping Ukrainian gains, estimating that Kyiv has seized around 2,500 square kilometers (965 square miles) in its eastern breakthrough. The institute said it appeared that "disorganized Russian forces (were) caught in the rapid Ukrainian advance." They cited social media images of apparent Russian prisoners seized in the advance around Izyum and surrounding towns.

The same report said Ukrainian forces "may collapse Russian positions around Izyum if they sever Russian ground lines of communication" north and south of the town.

Vladislav Sokolov, head of the Russian-appointed local administration, said on social media that authorities in Izyum have started evacuating residents to Russia.

The fighting in eastern Ukraine comes amid an ongoing offensive around Kherson in the south. Analysts suggest Russia may have taken soldiers from the east to reinforce around Kherson, offering the Ukrainians the opportunity to strike a weakened front line.

Ukrainian Defense Minister Oleksii Reznikov told the television channel Ukraina that the Russians had no food or fuel for their troops in the area as Kyiv had cut off their supply lines.

"It will be like an avalanche," he said, predicting a Russian fallback. "One line of defense will shake and it will fall."

The Ukrainian military was more circumspect about the reported gains, claiming Saturday to have taken "more than 1,000 square kilometers" (386 square miles) from pro-Kremlin forces this week. It said "in some areas, units of the Defense Forces have penetrated the enemy’s defenses to a depth of 50 kilometers," matching the British assessment, but did not disclose geographical details.

Officials in Kyiv have for weeks been tight-lipped about plans for a counteroffensive to retake territory overrun by Russia early in the war, urging residents to refrain from sharing information on social media.

However, Ukrainian President Volodymyr Zelenskyy said Friday that Ukrainian troops had reclaimed more than 30 settlements in the Kharkiv region since the start of the counteroffensive.

"We are gradually taking control over more settlements, returning the Ukrainian flag and protection for our people," Zelenskyy said. 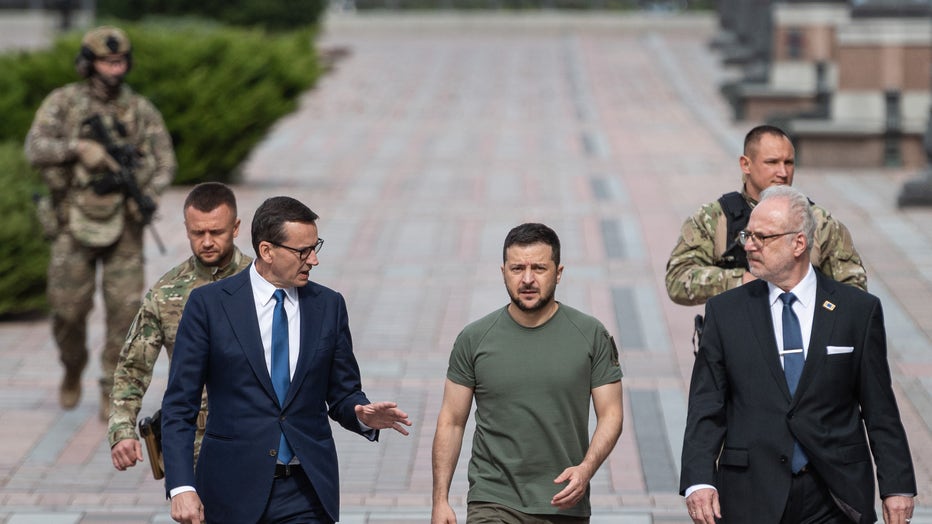 He spoke after the Ukrainian governor of Kharkiv reported that the national flag had been raised over Balakliya, a town recaptured by Ukrainian troops on Thursday following six months of Russian occupation.

"Balakliya is Ukraine! Today, together with the military, led by the commander of the Ground Forces Oleksandr Syrskyy, we raised the Ukrainian flag," governor Oleh Syniehubov wrote on Telegram.

Elsewhere, Ukrainian emergency services reported that a 62-year-old woman was killed in a Russian missile strike in the Kharkiv region when her home was flattened overnight.

Syniehubov also accused Moscow of pummeling settlements retaken by Kyiv. He said in a Telegram post that five civilians were hospitalized in the Izyum district, while nine others suffered injuries elsewhere in the region.

In the embattled Donbas region south of Kharkiv, the Ukrainian governor said civilians were killed and wounded overnight by Russian shelling near the city of Bakhmut, a key target of the stalled Russian offensive there. Pavlo Kyrylenko said on Telegram that two people died and two more suffered injuries in Bakhmut and the neighboring village of Yahidne.

Baerbock said Germany will assist Ukraine in finding and removing mines and other unexploded ordnance left by Russian troops in areas where they have been pushed back by Ukrainian forces.

Despite the gains made by Ukraine’s armed forces, U.S. Secretary of State Antony Blinken and the head of NATO warned Friday that Ukraine's fight against Russia appears set to drag on for months. Blinken said the war was entering a critical period and urged Ukraine's Western backers to keep up their support through what could be a difficult winter.