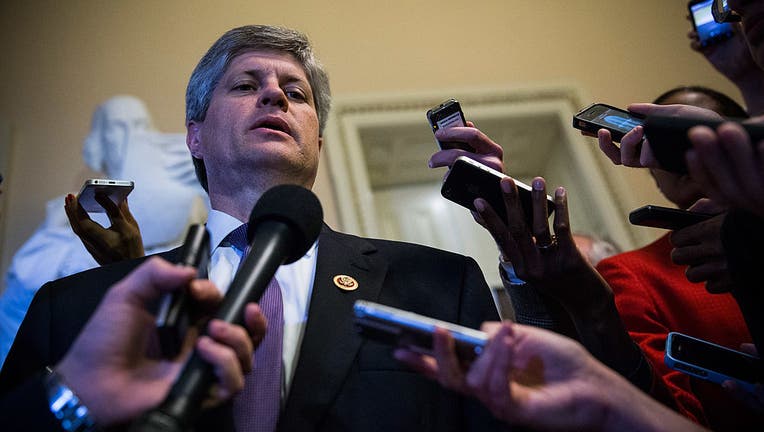 WASHINGTON, DC - OCTOBER 15: U.S. Rep. Jeff Fortenberry (R-NE) walks through the Capitol Building on October 15, 2013 in Washington, DC. The government has been shut down for 14 days. (Photo by Andrew Burton/Getty Images)

OMAHA, Neb. (AP) - Republican U.S. Rep. Jeff Fortenberry of Nebraska on Saturday resigned from office after a California jury convicted him of lying to federal authorities about an illegal campaign donation from a foreign national.

In a letter to the House, Fortenberry said he was resigning from Congress, effective March 31.

"It has been my honor to serve with you in the United States House of Representatives," he said in the letter. "Due to the difficulties of my current circumstances, I can no longer effectively serve."

Fortenberry’s resignation letter opened with a poem, "Do It Anyway," that’s associated with Mother Teresa. One line from the poem says: "What you spend years building, someone could destroy overnight. Build anyway."

Fortenberry’s announcement followed concerted pressure from political leaders in Nebraska and Washington for him to step down. House Speaker Nancy Pelosi and House Minority Leader Kevin McCarthy on Friday urged Fortenberry to resign.

Nebraska Republican Gov. Pete Ricketts said Fortenberry should "do the right thing for his constituents" and leave the office he has held since 2005.

Fortenberry was indicted in October after authorities said he lied to FBI agents in two separate interviews about his knowledge of an illegal $30,000 contribution from his campaign from a foreign billionaire. Fortenberry was interviewed at his home in Lincoln, and then again with his lawyers present in Washington, D.C.

At trial, prosecutors presented recorded phone conversations in which Fortenberry was repeatedly warned that the contributions came from Gilbert Chagoury, a Nigerian billionaire of Lebanese descent. The donations were funneled through three strawmen at a 2016 fundraiser in Los Angeles.

Fortenberry’s withdrawal from the primary leaves state Sen. Mike Flood as the likely GOP nominee. The former speaker of the Nebraska Legislature, who has won endorsements from Ricketts and former Gov. Dave Heineman, has a strong advantage in the Republican-leaning 1st Congressional District. State Sen. Patty Pansing Brooks, a Democrat from Lincoln, is also running for the seat.

Pansing Brooks said Fortenberry’s conviction is a "wake-up call" that the district needs a change.

In a statement Saturday, Pansing Brooks said: "This opens the door for a new approach to serving (the 1st Congressional District). I am ready and able to meet that challenge and lead with integrity."