A memorial was held outside the FAC building at UT Austin Wednesday evening for beloved campus cat Domino. Dozens of students showed up to pay their respects to the UT icon.

AUSTIN, Texas - The lawn in front of the Peter T. Flawn Academic Center (FAC) was decorated with flowers, candles and handwritten notes Wednesday evening to celebrate the life of beloved University of Texas at Austin campus cat, Domino.

Domino, dubbed "King Domino" by his admirers and fans, showed up to the FAC as a stray kitten around 2009, according to Patrick Parker of Cats of West Campus and the Domino Council. He continued to live on the UT Austin campus as a famous face, cared for by a group of employees in the Tower.

Domino quickly became a campus icon, and could be found lounging around the FAC lawn, or in his little house, spreading his positive energy to those passing by. A petition asking for a statue or plaque commemorating Domino in the area he used to frequent has been created.

"I saw the famous Instagram posts where he's sitting in front of the tower, and I got excited. I was like ‘I’m going to UT, I can find Domino,'" said UT Austin sophomore Abigail Kaspar. "And then my first night on campus, me and my friends, we were walking around, and then we passed by the bushes, and I was like ‘oh there’s a little house there,' and then Domino was sitting on top of it and ever since then I was just connected."

The impact Domino had on the lucky UT Austin students who were graced with his presence became even more obvious at his memorial. Dozens of students showed up to pay their respects to their comforting friend.

"I wasn't very fond of cats coming into college, and then I met Domino outside the FAC before school started," said UT Austin sophomore Mackenzie Ibarra. "I was like yeah, this is a good cat. I'm a cat person now."

Parker spoke at Domino's memorial, sharing some of his favorite memories of him. Parker said Domino's personality, and the amount of people he positively impacted, has helped other stray cats get adopted. FOX 7 previously reached out to Cats of West Campus for an interview about Domino in April, but at that time, his caretakers had been recently informed of his illness. During that time, the group sent the following statement to FOX 7:

Domino unfortunately passed away less than a month later. 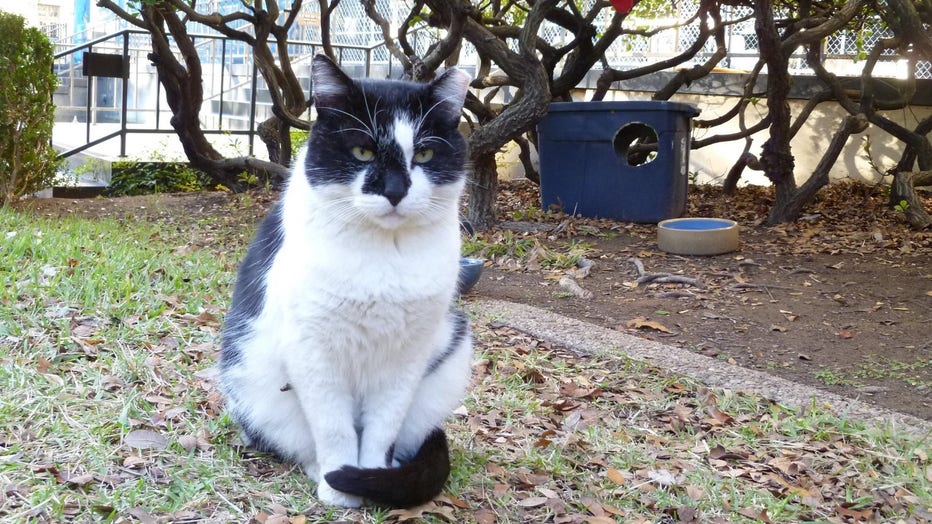 Students who showed up to the memorial say they will fondly miss Domino, and although another cat like him showing up in the area would be great, no cat can replace the ‘King.’

"Definitely irreplaceable" Kaspar said. "There are tons of stray cats on campus, and none of them are like Domino."

"I think also the fact that he would like, let you pet him, or he would just like be there with you and his presence was just enough," said UT Austin freshman Katie-Grace Ibarra. "Other cats you see them, but they like run away, they're still like kind of scared. But Domino, he was like never scared. He was like ‘oh yeah, I belong here, you are in my presence, like enjoy it.’"