A dog enjoying some retail therapy was spoiled for choice when it came to choosing a new chew toy at a Missouri hardware store.

LIBERTY, Mo. - A dog jumped into a giant box of toys and her joy could practically be felt through the screen.

On March 4, Shannon Emery took his 1-year-old German shepherd, Mila, to his local Menards for a visit, which is a common occurrence.

"She has been to this store a couple of times and she does get to pick out a toy each visit," Emery said.

And during her visit, Mila got a tad overzealous after seeing the all-too-familiar bin where she gets to pick her toys. 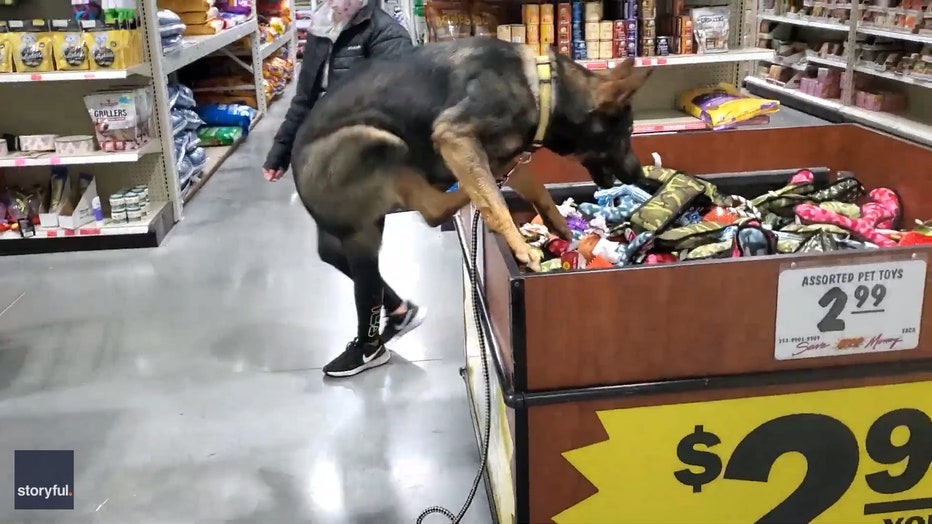 RELATED: ‘This is a simple story about love’: Couple makes mobile bed to take elderly dog on walks in final months

"The aisle with the toy bin is one of the last stops in the store so she impatiently pulled the leash towards that part of the store the whole visit," Emery said.

Video shared by Emery shows Mila excitedly whining as she hoists herself up to peer inside the giant toy bin.

Emery can be heard in the background coaxing Mila to choose a toy to take home.

"When we finally got there this time, the stock was low so she could not reach the toys very well. She just jumped right in without hesitation but I was not recording the first time she did it. So, we recreated the moment on camera," he said.

As Mila attempted to get herself into the toy bin a few times, she gets a little bit of motivation from a bystander who holds up a speaking ball which Mila just had to have.

Mila finally gathered the gumption to jump high enough and land inside of the toy bin, landing gracefully on top of all the toys. She looked like she was in dog heaven.

Mila decided to take home a yellow squeaky ball, according to Emery.