Utah police officer teaches teen how to tie a tie

A Utah police officer was caught on camera helping a single mom and her son with a wardrobe emergency.

PARK CITY, Utah - A Utah police officer was caught on camera helping a single mom and her son with a wardrobe emergency.

Christy Carter and her son, Jake, were struggling to tie the boy's tie for a homecoming dance. According to KSTU, the 17-year-old senior was running late to take homecoming photos, and realized he didn't learn how to tie a tie. He told the news station he had to look up a YouTube video.

Christy ended up driving to her friend's home, hoping someone there can tie Jake's tie for him. However, on the way, she didn't come to a full stop at a stop sign, and was pulled over. 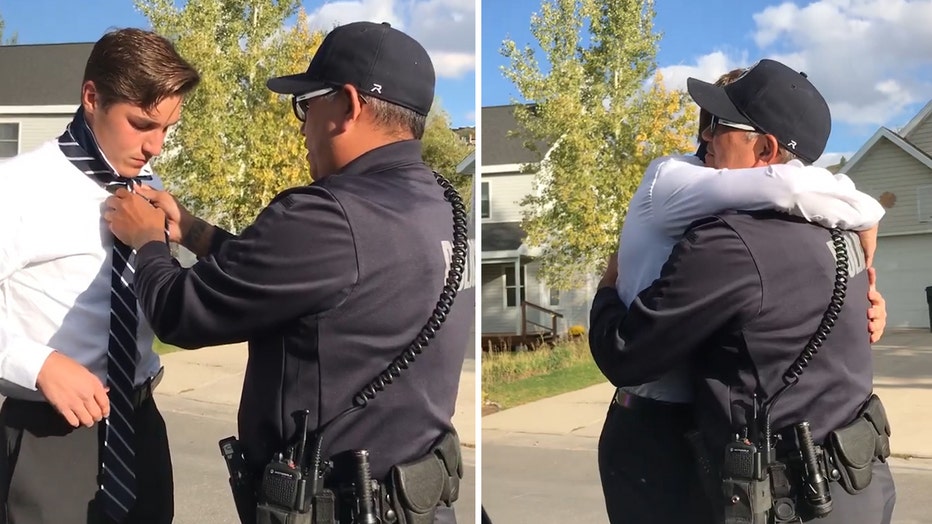 Officer Mike Carrillo with the Park City Police Department noticed the mother and son were stressed, and found out why they were in such a hurry. Instead of handing out a ticket, officer Mike Carrillo stepped in to help. Christy pulled out her phone and started recording video of the tie-tying lesson.

At the end of the video, Jake is heard asking, "Am I allowed to give you a hug?"

And the now fully-prepared teenager and police officer embraced.

Now, Jake knows how to tie a tie.