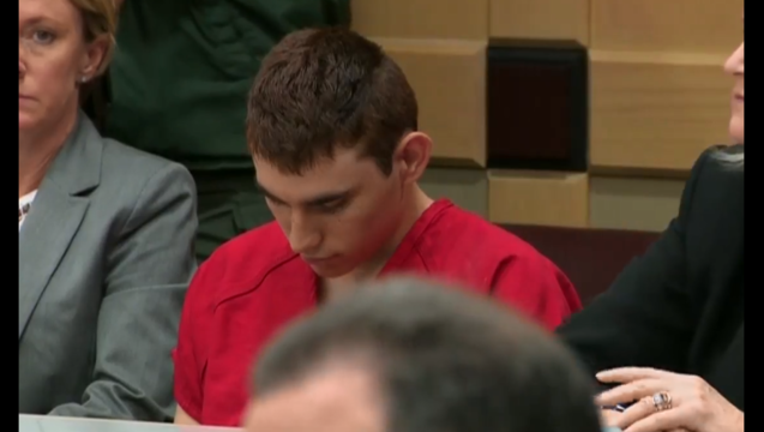 Nikolas Cruz appears in open court for the first time on Monday, Feb. 19, 2018, during a status hearing before Broward Circuit Judge Elizabeth Scherer. Cruz is facing 17 charges of premeditated murder.

Recently orphaned, as his adoptive mother had died about three months ago, Nikolas Cruz was living with a family in Florida who said they had no idea that despite his depressed nature, the 19-year-old would be behind one of the worst mass school shootings in U.S. history.

“We had this monster living under our roof and we didn’t know,” Kimberly Snead told the South Florida Sun Sentinel in an exclusive interview Saturday. “We didn’t see this side of him.”

Cruz was back in a Broward County courtroom on Monday, charged with 17 counts of premeditated murder, one for each of the lives he is accused of taking on Feb. 14 at his former high school in Parkland, Florida. It was his first live appearance before a judge - last week he was arraigned via video conference. He didn't speak and kept his head bowed low. He did not enter a plea and was ordered held without bond.  An exact motive had not yet been determined.

Cruz and his brother, Zachary, had been adopted, and were raised largely by their mother, Lynda Cruz, especially after their father, Roger P. Cruz, died suddenly in 2004 at the age of 67. People who knew Nikolas said he had taken the loss of his adoptive mother hard.

The Sneads’ son had asked them if Cruz could stay with them after the teen’s adoptive mother died of pneumonia on Nov. 1. The Sneads agreed, according to the Sun Sentinel. The two boys knew each other from the Junior Reserve Officers' Training Corps.

James Snead, 48, is a decorated army veteran and a military intelligence analyst who served stints in the Middle East between 1988 and 1996. Kimberly Snead, 49, is a neonatal intensive care nurse who cares for premature and ill babies. The couple has since told their story to the New York Times and the Miami Herald.

The Sneads knew Cruz was sad and they tried to help. In fact, James Snead told the Herald that "things were looking up. Just two weeks ago, he said it was the happiest he'd ever been."

Five days before the shooting, Kimberly Snead told the Sentinel she took Cruz to a therapist. Cruz said he was open to therapy but didn’t like medication. He took a business card and was figuring out what his health insurance would cover.

They insisted he enlist in adult education classes and drove him there each day.

The couple knew the teen had guns, including an AR-15 and two rifles, and told him he’d have to lock them up, the Sentinel said. They hadn’t realized until after the Valentine’s Day shooting that Cruz must have kept a key to the gun safe for himself.

They told Cruz he needed to ask permission to take out the guns. He had asked only twice since November. They said “yes” once and “no” once.

“What else could this family have possibly done to put this young man on the right track?” their attorney, Jim Lewis, told the Sentinel. “They tried to do a good deed and it went horribly wrong for them.”