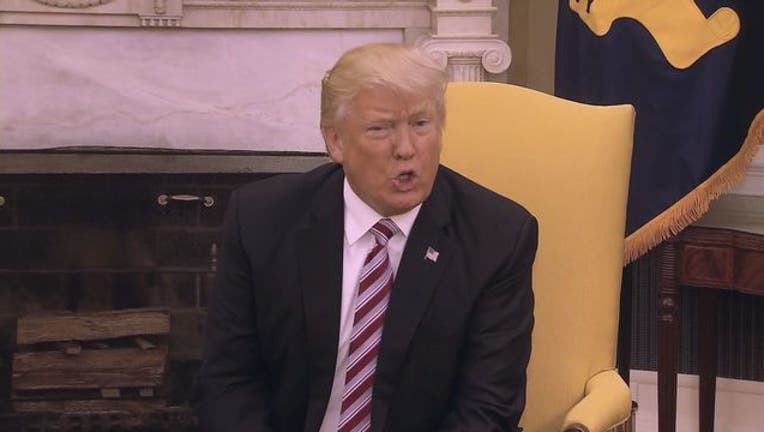 WASHINGTON (AP) -- President Donald Trump is expected to pull the United States from a landmark global climate agreement, a White House official said Wednesday, though there could be "caveats in the language" announcing a withdrawal, leaving open the possibility that his decision isn't final.

Exiting the deal would be certain to anger allies that spent years negotiating the accord to reduce carbon emissions.

The official insisted on anonymity in order to discuss the decision before the official announcement.

Trump tweeted on Wednesday morning: "I will be announcing my decision on the Paris Accord over the next few days. MAKE AMERICA GREAT AGAIN!"

Nearly 200 nations, including the United States under President Barack Obama's administration, agreed in 2015 to voluntarily reduce their greenhouse gas emissions in an effort to combat climate change. Withdrawing would leave the United States aligned only with Russia among the world's industrialized economies in rejecting action to combat climate change.

Trump pledged during his presidential campaign to withdraw the U.S. from the pact immediately after taking office, but had wavered on the issue since winning the election.

Trump's top aides were divided on the issue; some advocated withdrawal, others urged him to stay. One potential compromise that had been discussed involved remaining in, but adjusting the U.S. emissions targets.

During Trump's overseas trip last week, European leaders pressed him to keep the U.S. in the pact. French President Emmanuel Macron spoke with Trump at length about the issue during a meeting in Brussels, and even at the Vatican, Cardinal Secretary of State Pietro Parolin made his own pro-Paris pitch to Trump and his advisers.

Trump claimed before taking office that climate change was a "hoax" created by the Chinese to hurt the U.S. economy. Such an assertion stands in defiance of broad scientific consensus.

Word of Trump's decision comes a day after the president met with Scott Pruitt, the administrator of the Environmental Protection Agency. Like his boss, Pruitt has questioned the consensus of climate scientists that the Earth is warming and that man-made climate emissions are to blame.

Once in power, Trump and Pruitt have moved to delay or roll back federal regulations limiting greenhouse gas emissions while pledging to revive the long-struggling U.S. coal mines.

What is not yet clear is whether Trump plans to initiate a formal withdrawal from the Paris accord, which under the terms of the agreement could take three years, or exit the underlying U.N. climate change treaty on which the accord was based.

Senate Majority Leader Mitch McConnell, R-Ky., and 21 other Republican sent Trump a letter last week urging him to follow through on his campaign pledge to pull out of the climate accord. Most of the senators who signed are from states that depend on the continued burning of coal, oil and gas.

There have been influential voices urging Trump not to ditch the Paris accord. Forty Democratic senators sent Trump a letter urging him to stay in, saying a withdrawal would hurt America's credibility and influence on the world stage.

Hundreds of high-profile businesses have spoken out in favor of the deal, including Apple, Google and Walmart. Even fossil fuel companies such as Exxon Mobil, BP and Shell say the United States should abide by the deal.

The U.S. is the world's second largest emitter of carbon, following only China. Beijing, however, has reaffirmed its commitment to meeting its targets under the Paris accord, recently canceling construction of about 100 coal-fired power plants and investing billions in massive wind and solar projects.