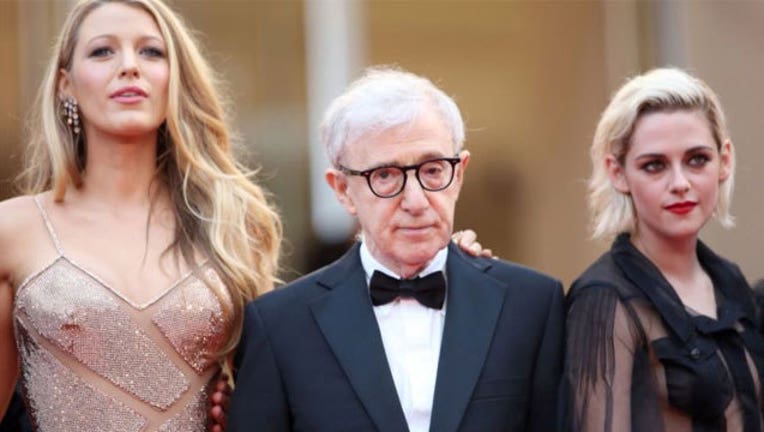 Allen brought his 1930s Hollywood romance "Cafe Society," along with stars Kristen Stewart and Jesse Eisenberg, to Cannes to kick off the French Riviera festival. But just minutes before their press conference, a column by Allen's son Ronan Farrow was posted online by The Hollywood Reporter in which he reiterated sexual abuse allegations against his father. Farrow questioned Cannes' continued embrace of Allen and chastised the press, who he said don't ask "the tough questions."

"That kind of silence isn't just wrong. It's dangerous," wrote Farrow. "It sends a message to victims that it's not worth the anguish of coming forward. It sends a message about who we are as a society, what we'll overlook, who we'll ignore, who matters and who doesn't."

No reporters asked Allen about Farrow's column at the press conference and Allen's publicist didn't return an email requesting comment Wednesday. Allen has previously denied that he molested Dylan, allegations first leveled in 1992 when Dylan was seven and Allen and Mia Farrow were in the midst of a bitter divorce.

The high-profile placement of Allen's latest comedy as the Cannes opener was perhaps too glaring a spotlight not to escape controversy. Allen, a Cannes regular, came to the festival with 2015's "Irrational Man," although that film played in a less prestigious slot out of competition.

The famed festival is coming six months after the Paris terrorist attacks that killed 130 people and as France remains in a state of emergency. Security has been elevated, with increased bag checks and bomb sweeps. Festival president Pierre Lescure says about 500 highly-trained security agents will be on guard around Cannes' red-carpeted headquarters, the Palais des Festivals.

Opening day was still a starry affair. Along with Stewart, "Cafe Society" brought Blake Lively to the Croisette. Justin Timberlake and Anna Kendrick also serenaded festivalgoers with an acoustic performance of Cindi Lauper's "True Colors" in a promotion for the upcoming DreamWorks Animations release "Trolls," in which they voice the main characters.

"We are Anna and Garfunkel," Timberlake announced.

The jury that will decide Cannes' prestigious Palme d'Or award was also introduced. Led by "Mad Max" director George Miller, it includes Donald Sutherland, Kirsten Dunst and Mads Mikkelsen. Over the next 10 days, they will screen an especially strong slate of films vying for the Palme, including new releases from Pedro Almodovar, Jim Jarmusch, Asghar Farhadi, Andrea Arnold, Sean Penn and the Dardenne brothers.

But the day effectively belonged to Allen, even though "Cafe Society" drew weak reviews. In the film, Eisenberg stars as a Bronx nebbish trying to make it in Hollywood, where his uncle (Steve Carell) is a powerful agent. He becomes smitten with his uncle's assistant, played by Stewart.

"I'm 80. I can't believe it," said Allen, speaking to reporters with a hearing aid. "I'm so youthful, agile, nimble, spry, mentally alert that it's astonishing."

"Cafe Society," which opens in theaters this summer, is the latest in a long list of films by Allen to feature an affair between an older man (Carell) and a younger woman (Stewart). Asked if he would ever consider making a movie about a 50-something woman who gets together with a 20-something man, Allen called it "a perfectly valid comic idea."

"I just don't have any material on it, anything really to draw on," said Allen. "I wouldn't hesitate if I had a good story."