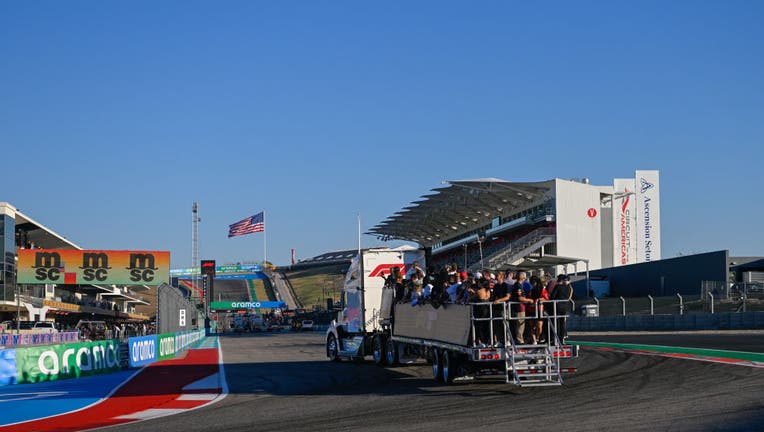 AUSTIN, TX - OCTOBER 20: Avid F1 race fans make the turn to head up the front stretch during a late afternoon tour in the bed of an 18-wheeler during F1 US Grand Prix prep day at Circuit of the Americas on October 20, 2022 in Austin, TX. (Photo by Ke

Back when the two-time Formula 1 champion could jog the city streets without being noticed, move through a hotel lobby with ease, and drive to the Circuit of the Americas for the U.S. Grand Prix without planning for traffic well ahead of time.

No more. If anything demonstrates the explosive growth of F1 in the U.S., it’s the projections of more than 400,000 fans expected to pack the city and the circuit this weekend for the 10th anniversary of the Texas race that put the series’ footprint back on American soil.

"In the last four years or three years, there’s a lot of fans. It has changed everything. It changed the traffic, it changed the hotel," Alonso said this week. I ran this morning in the city and everyone recognized us now."

The U.S. Grand Prix has been the foothold for F1 in the U.S. since the first surprise announcement that a $300 million racetrack was being cut through the rocky soil a dozen miles from the state Capitol. The series’ explosive growth in America has led to an additional race in Miami that started this season, and another coming in Las Vegas next year.

Sunday will be the final race of the original 10-year agreement in Austin because the COVID pandemic canceled the race in 2020. But F1 isn’t going anywhere. A five-year extension was already announced last year.

Formula One drivers make pit stop at Dell Children's to hang out, play with kids

Haas F1 drivers Mick Schumacher and Kevin Magnussen will be racing this weekend, but on Wednesday, they got the chance to race with child patients in Mario Kart.

"I spent most of my adult life putting the pieces together for F1 to come to my hometown," said Tavo Hellmund, the founder of the Texas race and its initial promoter.

The Texas race has had its share of ups and downs.

Lewis Hamilton won the first race in 2012, overtaking eventual season champion Sebastian Vettel of Red Bull. Vettel returned in 2013 to spin donuts after a victory in a dominant year that saw him tie Michael Schumacher’s single-season wins record of 13.

That was also the last of Vettel’s four championship seasons and he’s set to retire this year. Red Bull’s current champion, Max Verstappen, can tie the single-season victory record if he wins Sunday. Even with this season’s title already in hand, Verstappen plans to push for the victory and the record.

The first came with a rainy victory in 2015 amid a bitter rivalry with Mercedes teammate Nico Rosberg. Hamilton’s post-race cap toss to a dejected Rosberg in the cool down room — and Rosberg throwing it back past Hamilton’s face — is memorable. Hamilton clinched his sixth championship here in 2019.

Attendance dipped for several years. But it began to rebound when Circuit of the Americas President Bobby Epstein started tying major entertainment acts into the race weekend. Taylor Swift, Justin Timberlake and Billy Joel are among the pop stars who have performed Saturday night concerts on the midfield in recent years.

Circuit of the Americas welcomes back Formula 1 this weekend for the US Grand Prix. The sport has picked up traction over the years with the success of the Netflix series "Drive to Survive". Fans of the show will recognize the CEO of McLaren Racing, Zak Brown, who sat down with Good Day Austin's Tierra Neubaum to preview this weekend's festivities.

"We learned from the fans what they wanted. We started out thinking this was just about motorsports," Epstein said. "What we should have been doing is saying, what do the fans want? How do we make this about entertainment? That’s why we see such huge crowds here.

"Of course, we were worried about it a lot between years four and seven. And then the pandemic hits just when we were getting on our feet and getting successful and profitable," Epstein said.

The year away and the gripping championship fight between Verstappen and Hamilton in 2021 brought a massive crowd.

Fans love the place and so do the drivers.

"This is one of the better circuits we have," said Hamilton, who along with Vettel, Alonso, Red Bull’s Sergio Perez and McLaren’s Daniel Ricciardo have raced in Austin every year since it opened.

"We get this crowd that just keeps growing year on year. They just do it differently here. Us Europeans, we’re good at sports .... but the sport is growing as a whole in how we put on a show."

Ricciardo, an Australian, embraces the Texas atmosphere like no one else. Every year, he mimics a Texas drawl and finds a way to connect with the locals.

On Thursday, he rode into the paddock on a horse while wearing a cowboy hat and jacket made to look like an American flag ahead of what may be his final race in Austin. Ricciardo won’t return with McLaren next season and currently doesn’t have a seat for 2023.

"The U.S. Grand Prix is one of my absolute favorite races of the year," Ricciardo said. "The extra energy I get from the atmosphere is immeasurable and I love everything about it."