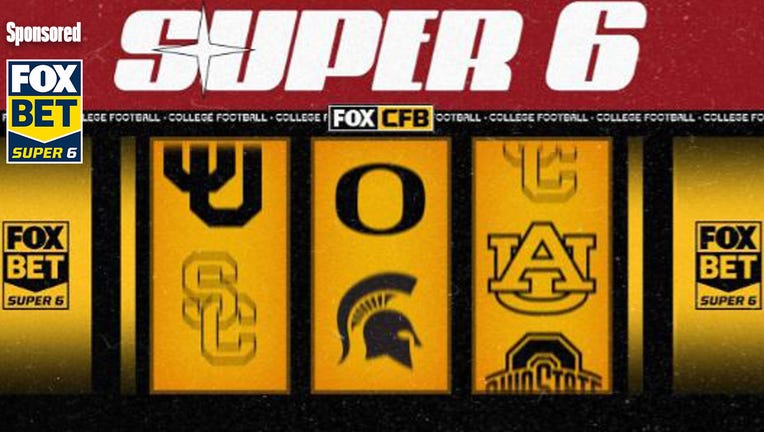 $25,000 is up for grabs in FOX Bet's Super 6 College Football contest. Find out how to play and read all about the marquee games! (FOX Sports)

College football Week 3 is here, so it's time for us to get in the game again to try to win big!

So if you had Saturday plans, it's time for you to cancel them. Your new Saturday commitment? Getting your Super 6 picks in before the games kickoff and following the contest.

If you're new to Super 6, download the free-to-play app right now for a chance to win this weekend's big prize. And if you're a returning player, we're happy to have you back on the team.

Oklahoma leads the all-time series 46-38-3. Is another win around the corner for the Sooners?

Coach Brent Venables’ era in Norman has gotten off to a perfect 2-0 start. The Scott Frost era in Nebraska, on the other hand, ended before we could advise you to auto-fade the now-fired Cornhuskers coach.

The oddsmakers currently have Oklahoma as a 10.5-point road favorite in Saturday's matchup against Nebraska. And considering how the Cornhuskers fell to the Georgia Southern Eagles of the Sun Belt Conference last weekend, it's surprising the Sooners aren't favored by more.

Nebraska's interim coach Mickey Joseph will do his best against Oklahoma to quell the critics in the wake of the squad's dismal 1-2 start. But we believe the Sooners are too tough a matchup for the Cornhuskers as they work to get their season — and program — back on track.

And remember, this Sooners team has scored on all eight of their red zone opportunities this season.

Prediction:
Oklahoma by 14 to 17 points

Truthfully, both these teams are fascinating. Oregon got routed by the national champion Georgia Bulldogs 49-3 in Week 1. Although they didn't play like it, the Ducks went into the game against Georgia as the No. 12 ranked team. The Ducks quacked back in Week 2 against Eastern Washington University with a 70-14 victory. But the Dawgs and the Eagles are on two very opposite ends of the talent spectrum.

So do we really know who Oregon is?

And then, there's BYU. The Cougars beat Baylor in Week 2, holding them to just 289 yards of offense. However, it took a thrilling overtime period for the Cougs to come up with the win. But a win is a win, right? And BYU did beat USF in Week 1 pretty handily with a 50-21 victory. But just like with the Ducks, the jury is still out on whether BYU is the real deal.

Currently, oddsmakers have Oregon as 3.5-point favorite. A good note to remember is Oregon's new head coach Dan Lanning comes from Nick Saban's Alabama coaching tree by way of Kirby Smart and UGA. Unless you're living completely off the grid, you know that anything Saban touches eventually turns into success.

With that in mind, just like oddsmakers, we're going to give the edge to the Ducks.

Prediction:
Oregon by 10 to 12 points

The Nittany Lions are hitting the highway, heading south to take on the Auburn Tigers. And we're just gonna go ahead and say it exactly the way they say it down in Jordan-Hare.

We're taking James Franklin's reputation as a coach who can't close big games into consideration for this pick. In 2021 alone, Penn State lost to No. 3 Iowa, No. 5 Ohio State, No. 6 Michigan, No. 12 Michigan State and, for good measure, No. 21 Arkansas in the Outback Bowl. Based on that record, those Lions are more cowardly than courageous.

And when it comes to big games, a look at this year's rankings shows that Auburn hasn't even cracked the Top 25. So is this matchup really even a big game? To us, it looks like another opportunity for Franklin to fall short.

Unranked Auburn plays in the ultra-competitive SEC West. So any opponent facing an SEC West team is probably in for a battle. Yes, Penn State topped Auburn last year, but that was a home game for the Nittany Lions. And that was when they faced a Tigers team with not-so-spectacular quarterback Bo "Interception" Nix under center.

Prediction:
Auburn by 14 to 17 points

Ohio State is currently on track to make another College Football Playoff (CFP) semifinal appearance. The Buckeyes might even be on the road to another championship. But it is only Week 3, so we'll try not to get too ahead of ourselves.

The Toledo Rockets of the MAC-West will be absolutely no match for the firepower of Heisman favorite C.J. Stroud and the Buckeyes. So the question here is not whether Ohio State will win but by how much. How soon will Ryan Day give his second-team squad reps on Saturday? Well, that depends on how long it takes for Ohio State to get this game out of Toledo’s reach.

Ohio State has won each of the three meetings between these squads, and the combined score is 115-22. So look for the Buckeyes to put up basketball score numbers in this game, too.

Prediction:
Ohio State by 28 to 35 points

The Spartans and the Huskies. A tale of two banged-up teams.

Spartan safety Xavier Henderson is sidelined with a leg injury, and the team's starting linebacker Darius Snow is out all year also because of a leg injury. The Huskies are without linebacker Edefuan Ulofoshio and safety Vincent Nunley. Both squads are undefeated at 2-0.

However, we're rolling with the road underdog Spartans in this contest.

They've won 13 of their last 15 games, and they lead FBS with 12 sacks this season. Michigan State is also the only Big Ten team that hasn't allowed a completion of 25 or more yards this season.

Prediction:
Michigan State by 7 to 9 points

Dating back to 2005, the Trojans have won four-straight meetings against the Bulldogs.

And call it confidence or cockiness, but we'd be willing to bet the Hollywood Hills that SoCal's favorite sons win and win big against Fresno State this weekend.

USC has been the topic of many college football conversations since Lincoln Riley was named head coach in the spring of this year. Was Lincoln running scared from the SEC? Can Riley bring USC back to dominance? Will Caleb Williams be the answer at quarterback that the Trojans need to be competitive again?

Maybe Lincoln Riley did bolt from OU because he didn't want to face the SEC's gauntlet once the Sooners joined the likes of Alabama and Georgia. Who knows, but who cares? All that matters now is that he's proving in real time that SoCal has something to say in the Pac-12 and college football.

And with decisive wins over Rice and Stanford, it looks like some of those pressing questions are getting answered.

Trojan QB Williams has passed for 590 yards, six touchdowns and zero interceptions this season. And so far, USC's offense is tied for third in the nation in scoring offense.

The Trojans of yesteryear might have allowed Fresno State to stick around in a game like this. Just look back to 2019 when USC barely beat the Bulldogs 31-23. But this year is different.

This year for the Trojans will be special.

Now, it's time for you to get in the game. Go to the FOX Bet Super 6 app, make your selections and remember to submit your picks before the games kick off Saturday. Share your picks with us across social media by tagging @FOXSuper6 and @EricaReneeD and using #EricaSuper6.