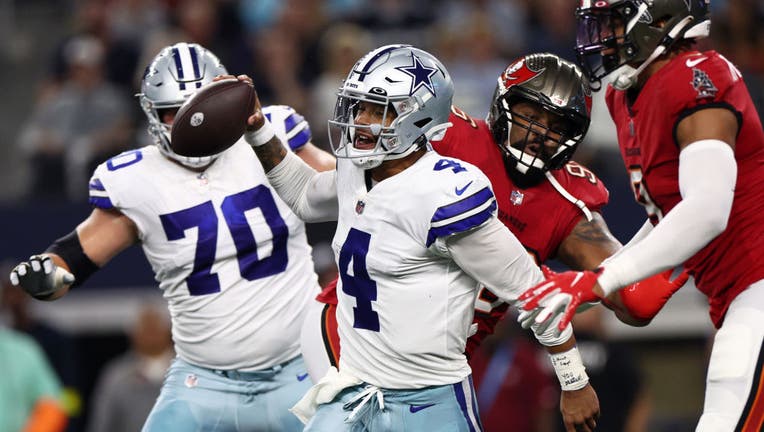 ARLINGTON, TEXAS - SEPTEMBER 11: Dak Prescott #4 of the Dallas Cowboys looks to pass against the Tampa Bay Buccaneers during the first half at AT&T Stadium on September 11, 2022 in Arlington, Texas. (Photo by Tom Pennington/Getty Images)

A rough night for Prescott got worse after his right hand struck a defender when throwing a pass in the fourth quarter. He was checked on the sideline before jogging to the locker room.

Brady was in control throughout the first start for a 45-year-old quarterback in NFL history. The seven-time Super Bowl champ got a big assist from the defense in Todd Bowles' debut as Tampa Bay's coach following three seasons as defensive coordinator.

The Cowboys and Bucs had the top two offenses in the NFL last season, which started with Tampa Bay's 31-29 win at home over Dallas when Brady and Prescott combined for seven TDs passing. Only one offense showed up this time.

Dallas drove 54 yards to a field goal on the first possession, but didn't score again while finishing with its second-fewest points in an opener. The Cowboys lost to New Orleans 28-0 in 1989 -- Jerry Jones' first game as owner.

Julio Jones had a 48-yard catch in the two-time All-Pro's Tampa Bay debut to set up one of four first-half field goals from Ryan Succop, who had five attempts before the break without a punt from the Bucs.

Brady, who improved to 7-0 against the Cowboys, was 18 of 17 for 212 yards with an interception that didn't amount to much because Prescott and receiver Noah Brown couldn't connect on an easy third-down throw near midfield early in the fourth quarter.

The Cowboys did nothing to quiet questions about the receiving group behind CeeDee Lamb, the third-year player who is the new No. 1 target after the offseason trade of Amari Cooper. 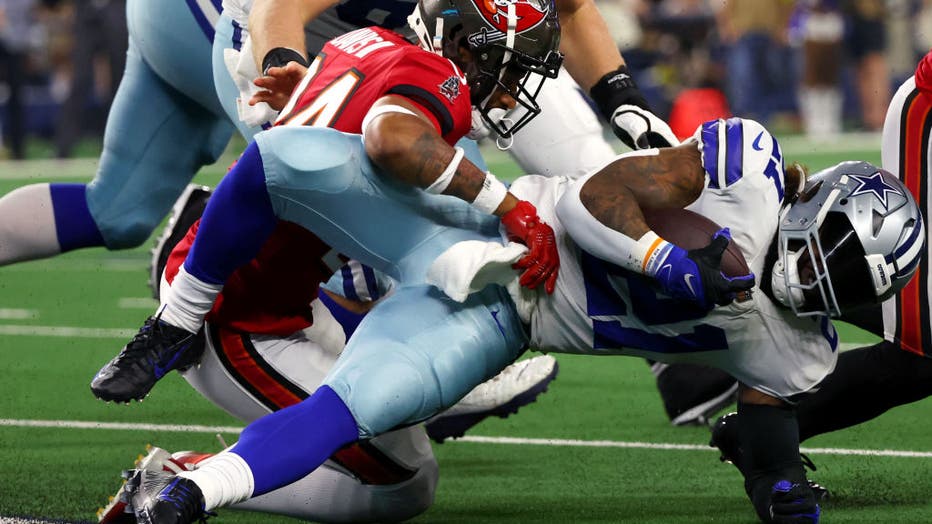 ARLINGTON, TEXAS - SEPTEMBER 11: Ezekiel Elliott #21 of the Dallas Cowboys is tackled by Carlton Davis III #24 of the Tampa Bay Buccaneers during the second half at AT&amp;T Stadium on September 11, 2022 in Arlington, Texas. (Photo by Richard Rod

Lamb had two catches for 29 yards while drawing most of the attention. Noah Brown had five catches for 68 yards, while Prescott finished 14 of 29 for 134 yards with an interception that set up one of the first-half field goals.

The gap in receiving depth was clear, with Evans and Chris Godwin both having catches of at least 20 yards in the first quarter before Godwin had to leave with a hamstring injury.

The Cowboys stayed close in the first half only because of two sacks from reigning NFL Defensive Rookie of the Year Micah Parsons. Both forced field goals, and Succop missed one of the tries.

Devin White matched Parsons with two sacks of Prescott as the Cowboys lost to the Bucs at home for just the second time while coach Mike McCarthy dropped to 0-3 in openers with Dallas. Dave Campo was the only other Dallas coach to do that.

Fournette had 40 of the 79 yards on the drive that ended with Brady's 5-yard scoring pass to Evans for a 19-3 lead.

Dallas first-round pick Tyler Smith was the first rookie in franchise history to start an opener at left tackle. The Bucs also had a rookie starter in left guard Luke Goedeke, a second-rounder. Both teams entered the opener with questions up front because of injuries and personnel changes.

The injuries mounted, too. Dallas left guard Connor McGovern didn't return after injuring his right ankle on the first series. Tampa Bay left tackle Donovan Smith exited in the second quarter with an elbow issue and also was ruled out.

Bucs Godwin, whose status for the opener was uncertain as he recovered from a knee injury, injured a hamstring in the first half and didn't return. ... Cowboys S Jayron Kearse, who was questionable coming with a neck issue, left in the second half with a knee injury.

Buccaneers: At NFC South rival New Orleans next Sunday. One of these teams has either won or shared the past five division titles.

RELATED: Going to a Dallas Cowboys game? Here's what you should know before heading to AT&T Stadium

Follow below for updates on the season opening game between the Dallas Cowboys and Tampa Bay Buccaneers. Mobile users click here.