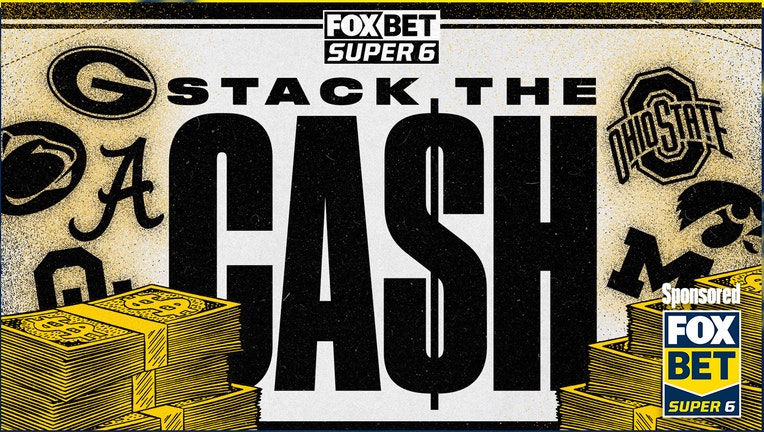 You can’t always control things in life. But the jackpot for this week’s FOX Super 6 College Football contest is completely in your hands.

Yes, you could help "Stack The Cash" – because the more entries in this week's college football FOX Bet Super 6 contest, the more fans like you help build this week’s contest prize pool to its highest level. In fact, this week's jackpot started at $25,000, and as of this writing, the grand prize had already surpassed $60,000, and last week's topped $100,000 – an over fourfold increase!

Even better – with last week's college football Super 6 winner, FOX Bet has now given away over $5 million in prizes. So why shouldn't you be the big winner in Week 6?

This week has some marquee games on the docket, with the Big Ten favorite to be decided in Iowa City, the annual Oklahoma-Texas clash at the Cotton Bowl and the SEC’s big boys battling in College Station and Auburn.

All in all, there’s no better time to play FOX Bet Super 6 – especially when you could help build the jackpot. It's fun, it's easy and it's absolutely free. Just download the Super 6 app on your phone or tablet and do your part!

Here are Saturday’s six games and how we see them playing out (with all odds via FOX Bet).

This game had a little more luster last Friday evening before Maryland was smacked around by Iowa in College Park, but there's still nothing like a Big Ten contest to get the college football day started.

Of note: The Terrapins have never beaten the Buckeyes in six tries since joining the Big Ten in 2014. And since their loss to Oregon in Week 2, Ohio State has averaged 52 points per game, as CJ Stroud has lived up to the hype as one of the best quarterback prospects in the country. This feels like a rout.

It's a rite of autumn in Dallas at the Texas State Fair: Oklahoma versus Texas. The winner gets the upper hand in the Big 12.

Spencer Rattler & Co. have redefined the term "living on the edge," winning four of their five games by one possession. Texas’ only slip-up was at Arkansas, but they have swept through the Lone Star State with three wins over Bijan Robinson and company running all over TCU, Texas Tech and Rice.

PICK: Oklahoma to win by 4-6 points

The best defense in the land resides in Athens, Georgia. Kirby Smart’s crew took a pretty good Arkansas squad last week and destroyed it with a 37-0 shutout and a second straight blanking. Georgia has yielded 4.6 points per game through five games.

Auburn has rallied nicely since losing at Penn State as Bo Nix and company won in Death Valley last Saturday night. The question is: Can Nix solve the puzzle of the Bulldog defense? If he can’t, this could get ugly.

The game of the year in the Big Ten features Penn State’s second tough road test out of three – they won at Wisconsin on Opening Day, and they have a trip to Columbus scheduled in two weeks.

Sean Clifford has been a huge surprise for the Nittany Lions, able to avoid the big mistake that haunted James Franklin’s team last year. Spencer Petras and the Hawkeyes' offense threw down the gauntlet last week in Maryland, setting the Hawkeyes up for this showdown. Remember that Iowa went into Happy Valley last year and ended Penn State’s six-game winning streak in the series.

The Big Ten team that nobody had thrown into the national title race went to Madison last week and throttled Wisconsin, serving notice that they are in the conversation.

Cade McNamara has stabilized the quarterback spot, and with the Cornhuskers still looking for a bit of an identity – even with the dual threat of Adrian Martinez – this feels like another game for Michigan to get ready for their big three on the schedule (Michigan State, Penn State, Ohio State).

At the beginning of the year, this looked like an ultra-marquee matchup for the SEC. In fact, the powers-that-be ended up placing this in a primetime spot. Well, the Aggies' losses to Arkansas and Mississippi State kind of ruined that plan – and now, A&M gets 'Bama. Good times.

Alabama’s Bryce Young has been the leading candidate for the Heisman, and he was incredible last week against Ole Miss during a 42-21 thumping. Coming into Week 6, the Aggies defense allows only 12.6 points per game. That number will increase significantly this week.

Play FOX Bet Super 6 every week for your chance to win thousands of dollars, including a $10,000 prize on the Big Noon Kickoff game of the week, the "Stack The Cash" college football promotion and, of course, the weekly NFL Challenge. Just download the FOX Bet Super 6 app and make your picks today!