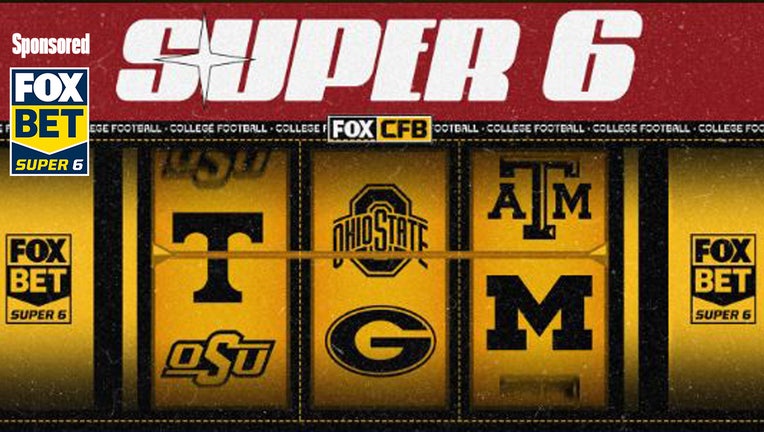 $25,000 is up for grabs in the FOX Bet Super 6 College Football Pick 6 contest. Find out how the Week 9 jackpot could be all yours! (FOX Sports)

This year, Halloween did not fall on the weekend, but it's all good. Why? Because the Saturday before the ghoulish holiday is packed with so many marquee matchups, even the bravest college football fans will be frightened awaiting the outcomes of these games.

We're talking Ohio State against Penn State on FOX, Georgia-Florida and Michigan State at Michigan. If the top-ranked squads in these games get the W, they still control their own destinies.

And speaking of destiny, there could be a $25,000 payday in your future if you play your FOX Bet Super 6 cards right. Actually, since it's Halloween weekend, this might be a job for Ouija.

FOX Bet Super 6 is a free-to-play contest where you pick the winners and margins of victory of six marquee matchups. Submit your picks before the games kick off on Saturday, and if you get them all correct — cha-ching! $25,000 cash could be all yours.

As a matter of fact, one lucky winner scored $10,000 in last weekend's BIG Noon Saturday Challenge. This is not a Halloween hoax. People really do win.

To get in the game for your chance at the prize, download the FOX Bet Super 6 app and make your picks. It's really that easy, and it's scary fun.

And since Halloween candy costs way more this year than ever, this is the perfect time to reclaim some cash and try your hand at 25 grand.

We've made some predictions to help guide you through the weekend's slate of games. Dive into ours before making your picks!

No. 2 Ohio State at No. 13 Penn State (Noon ET Saturday, FOX and the FOX Sports App)

Let's be honest. Ohio State looks unstoppable. What's not to love? It has one of the most electric offenses in college football, led by Heisman-favorite C.J. Stroud. The team is a perfect 7-0 straight up (SU) and 4-2-1 against the spread (ATS) this season. So bettors who have backed the Buckeyes are riding a profitable wave.

This weekend's BIG Noon Saturday matchup against the Nittany Lions might be the biggest test yet for the Buckeyes. And that's not saying much since the toughest game on Penn State's schedule so far was against Michigan — a matchup the Nittany Lions lost 41-17.

In addition to leading the all-time series 22-14, the Buckeyes have won the last five meetings. When Ohio State puts up more than 27 points on the Nittany Lions, the Buckeyes are a perfect 16-0. And have you seen the points OSU has put up on teams this year? You already know they're hanging at least a 30-piece on Penn State, which points to another Buckeye victory based on the trend.

Because this game has implications for dominance in the Big Ten, Penn State will keep it close for a couple of quarters. But then the Buckeyes gonna Buckeye.

Prediction:
Ohio State by 21 to 26 points

Georgia-Florida. The World's Largest Outdoor Cocktail Party. A staple of the Halloween weekend slate of college football matchups. And depending on which Georgia team decides to show up in Jacksonville on Saturday afternoon, this could be a scary affair for the national champion the Georgia Bulldogs.

The Dawgs opened up the season with a 49-3 stomping of the Oregon Ducks in Week 1. But in Week 4, Georgia gave up 22 points to Kent State from the Mid-American Conference. The following week, the silver britches narrowly escaped a feisty Missouri team with a 26-22 victory.

The 4-3 Gators are clearly out of the race for CFP contention, so this is their Super Bowl.

Georgia owns this series 53-44-2, and the Dawgs are 13-3 in this game when Florida is unranked. UGA lost a handful of top defensive weapons to the NFL Draft this year, but the team still ranks second nationally in scoring D. That defense will come in handy as the Dawgs face a Gators offense that ranks first in the FBS with 6.4 yards per carry.

But the Bulldogs' offense is obviously not too shabby. They've outscored opponents 292-64 this season, and they're averaging 41.7 points per game.

Both teams come into this matchup off a bye week. Taking a week to reset before playing in this emotionally and physically-draining, neutral-site clash is probably the smartest move in college football.

It'll be a dog fight, but we've got Georgia on our minds.

Prediction:
Georgia by 7 to 8 points

The Oklahoma State Cowboys corralled the Longhorns last week in a statement win that put the Big 12 and the rest of college football on notice. When it looked like Texas was two-stepping out of Boone Pickens with the W, a late drive by State threw a wrench in the Horns' plans. The Cowboys got the gutsy 41-34 victory.

So it should be light work for Oklahoma State this week against a lesser opponent in Kansas State, right?

Well, not so fast.

Kansas State's only two losses this season were to ranked teams. And the Wildcats' nine interceptions lead the Big 12. So the Cowboys will need to beef up pass protection against K-State.

While the Wildcats do a few things well, Okie State still gets the edge. The Cowboys have the fewest penalties in FBS, so they don't beat themselves. Averaging 44.7 points per game, Oklahoma State's scoring offense ranks third in the nation. Also, going back 25 games, OK State has forced 28 turnovers. So it's the Wildcats who really need to worry about protecting the ball.

Prediction:
Oklahoma State by 12 to 15 points

The Kentucky Wildcats came into the season pouncing from one victory to the next. Their four-game winning streak had the Cats at the forefront of CFP conversations. Fans and analysts again praised coach Mark Stoops for keeping Basketball School Kentucky relevant during football season.

And then the Wildcats dropped two-consecutive games against Mississippi State and South Carolina and fell down the rankings and back down to reality.

The Vols, on the other hand, are on Cloud Nine. Actually, they're on Cloud No. 3, sitting right behind Georgia and Ohio State in the national rankings. And this weekend, Rocky Top will reign supreme at Neyland Stadium.

Not only is raucous Neyland — with its 102,000-plus capacity — one of the most intimidating stadiums in all the sport, Tennessee owns Kentucky in this series. Tennessee leads the all-time series 82-26-9, the Volunteers defeated the Wildcats at Kentucky 45-42 last season, and when both teams are ranked, UT is 2-0. So history favors the Vols here.

​Listen, there's nothing wrong with being a basketball school that dabbles in a little bit of college football. But those are just the facts regarding Kentucky, and this weekend will be another reminder.

Prediction:
Tennessee by 12 to 15 points

What gives, 3-4 A&M? This can't be the same squad that had Nick Saban and Jimbo Fisher beefing in the offseason. Sure, the Aggies almost beat Bama this year, but sitting under .500, it looks like almost beating Bama might be the Aggies' only claim to fame this season.

But that all changes this weekend when the Aggies take down the Rebels.

Let's take a look at Ole Miss. The squad is coming off a 45-20 loss to LSU — the Rebels' first true test, and they failed miserably. Up until last weekend's game against the Tigers, the Rebels' toughest challenge had been Kentucky, and they only won that game by three points.

Yes, Ole Miss looks stellar on paper. The Rebels lead the FBS with 26 rushing touchdowns, they rank second in the SEC and 10th nationally in third down conversions. But guys, their schedule before LSU included teams like Troy, Central Arkansas and Georgia Tech.

We're going Gig' Em on the strength of Jimbo Fisher and the 12th Man.

Prediction:
Texas A&M by 3 to 4 points

Jim Harbaugh & Co. have got to feel good about the Wolverines' success this season. The team ranks fifth in the nation and has a real chance to run the table until they face Ohio State on rivalry weekend, of course. But we'll cross that Big Ten battle when we get to it.

For now, though, this matchup between Sparty and the Wolverines is really all about Michigan. Let's check that Big Blue resume.

Under Jim Harbaugh, Michigan is 42-8 when playing on its home turf. This season, Michigan has not only out-rushed every opponent, but it has also held a halftime lead in six of seven games. Also, the Wolverines rank sixth in FBS, scoring 42.7 points per game.

On the other side are the Spartans. They started 2-0, but then their season took a turn for the worst when they lost four out of their last five games. Michigan State allows its opponents a 43% third-down conversion rate, and it also allows opponents more points per game than they score.

When things are looking this down for Sparty Dawg in a year when everything's coming up roses for UM, there's only one choice.

Prediction:
Michigan by 9 to 11 points

Open your FOX Bet Super 6 app and make your selections before Saturday's games kick off. Remember to tag us across all social media platforms at @FOXSuper6 and @EricaReneeD and show us your picks using the #EricaSuper6 hashtag!