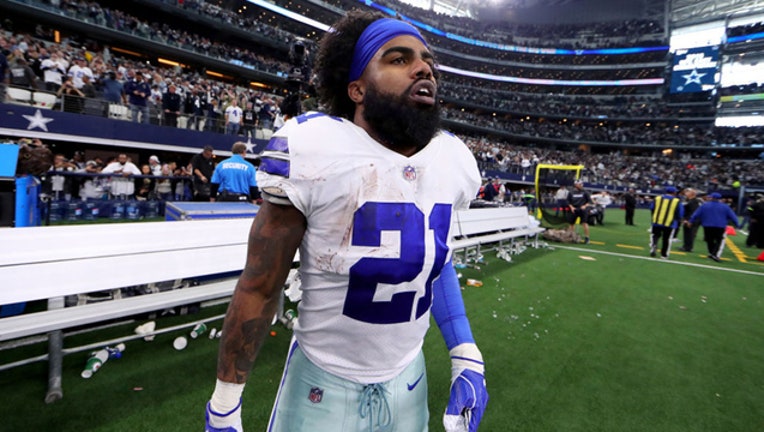 ARLINGTON, Texas (AP) - Dallas Cowboys owner Jerry Jones says he's operating under the assumption that Ezekiel Elliott will miss regular-season games because of a holdout, but doesn't think his star running back will be absent for all of them.

The Cowboys passed the most significant benchmark in Elliott's absence so far with their preseason finale, a 17-15 loss to Tampa Bay on Thursday, the 35th day of a holdout that has covered training camp and all four exhibitions.

Elliott has two years remaining on his rookie contract but wants to be the NFL's highest-paid running back after winning two rushing titles in his first three seasons. The fourth overall pick in the 2016 draft is due to make $3.9 million this season and $9.1 million in 2020.

"I'm operating as though right now he's going to miss regular season games," Jones said after the loss to the Bucs. "My entire expectation for what we're putting together as a team right now would anticipate with him holding out and not having any training camp, that he's going to miss games. I just accept that."

The Cowboys go into their opener Sept. 8 against the New York Giants with high expectations after two NFC East titles in three years with quarterback Dak Prescott and Elliott, who now have an improving young defense to go with one of the NFL's best offensive lines.

"No, he can't and won't miss them all," Jones said. "We need Zeke. We're a better team with Zeke, but we need to be able to win when we need to without players because of injuries, suspension or in this case, holdout."

The first practice before the opener is Wednesday. But that doesn't mean Elliott wouldn't play if he's not here by then.

The Cowboys experienced uncertainty over Elliott's availability two years ago when he was fighting a six-game suspension over domestic violence allegations in court. His last game before finally serving the ban, Elliott didn't know he would get to play until two days before the game.

Coach Jason Garrett and the staff also believe Elliott has been staying in shape while spending most of the past month in Mexico.

"There's no deadlines here with any of our contracts with our players," Jones said. "Certainly no deadline here. We'll be needing Zeke any time we can get him out there. So we don't have deadlines here."

The first two backs behind Elliott - rookie Tony Pollard and veteran Alfred Morris - didn't play against the Buccaneers. Pollard, a fourth-round pick, had a strong preseason and is the starter. Morris was Elliott's primary replacement during the suspension two years ago.

"Everybody knows who's not here, but you still have to keep playing," said receiver Michael Gallup, another starter who didn't play against Tampa Bay. "We're hoping to get him back. You know that's not in our control."