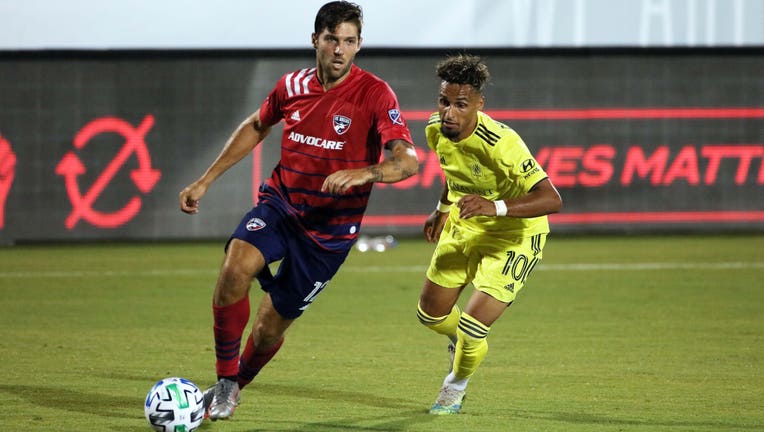 Ryan Hollinshead #12 of FC Dallas controls the ball during a game between FC Dallas and Nashville SC as part of the Major League Soccer 2020 at Toyota Stadium on Aug. 12, 2020 in Frisco, Texas. (Photo by Omar Vega/Getty Images)

With just three weeks remaining in the MLS Regular Season and the standings as tight as can be, the jockeying for playing spots and seeding is getting intense on the road to MLS Cup 2020. Some teams have a few as four games left on their schedule to either improve their position or get some momentum ahead of Decision Day on November 8th, with everything still up in the air in this most unique of years for American soccer, and two great games on FOX Sports this week.

What do these two teams have in common? They had to be sent home from the MLS Is Back Tournament after each suffered an outbreak of positive COVID tests before play resumed in July; as much as you can reduce it to games they’re making up against each other, think about that on a human level for a moment, the fear and anxiety and uncertainty both clubs had to go through before being able to finally resume play in August.

Nashville came into this year with low expectations, an expansion team many thought would follow the path of Minnesota in 2017 and Cincinnati last year, two teams who broke records with their poor defense and were buried in the standings. Instead, led by US National Team defender Walker Zimmerman, Nashville are on pace to break the record for best defense in league history by an expansion team, and are in a playoff spot as well.

Dallas meanwhile had to navigate their challenges with one of the youngest rosters in the league, chock full of homegrown stars who came through their youth academy. One of them, midfielder Tanner Tessmann, might have been kicking for the No. 1 ranked Clemson football team this fall; not just because he had committed to play soccer there as well, but because his godfather is Tigers coach Dabo Swinney! Instead, Tessmann signed an MLS contract just before the season opener, and the 19-year-old has helped lead his team to 4th place in the Western Conference so far this year.

It’s easy to get caught up in the history between these two teams—dating to 1975, this will be the 98th all-time meeting between the Sounders and Timbers as pro soccer teams, spanning various leagues and era. We also often focus on the incredible passion and pageantry from the fans in these games, but our current global pandemic means that’s not possible right now.

What’s often overlooked, as a result, is how dominant these two clubs have been in recent years: the last five Western Conference Championships have been won by either Seattle or Portland, and with both teams tied atop the West standings, it appears that once again the road to MLS Cup runs through the Pacific Northwest.

The Union came into this season focused on two major goals: to win a trophy, and to see at least one of their young homegrown stars make the move to Europe. The second goal has been accomplished, with 19-year-old New Jersey native Brendan Aaronson set to move to Red Bull Salzburg this winter (regular champions of Austria, and regular participants in the UEFA Champions League). Can he help deliver that sought-after title on the way out?

Toronto FC are the only team ahead of Philadelphia in the standings, and that’s a familiar sight: Eastern Conference Champions in three of the last four years, Toronto are eying a second regular-season title in three seasons, even as they’re forced by Canadian COVID precautions to play their “home” games in East Hartford, CT. A win over the Union would make that title all but theirs.

One year ago Saturday, these two teams were facing off in an epic playoff battle, and it seemed like Los Angeles had become the center of the American Soccer Universe. Like a lot of things in 2020, this is now more about what’s different than what’s the same: a rash of injuries for LAFC, including to reigning MVP Carlos Vela, has seen them battling just to make sure they’re in playoff position. Meanwhile, the Galaxy—the most successful team in MLS history—finds themselves at the bottom of the West, and Mexican star Chicharito has struggled to fill the shadow left behind by Zlatan Ibrahimovic.

Shockingly, it’s been the Galaxy who have owned this rivalry in the re-started MLS season: a 2-0 win in August was followed up by a 3-0 win over LAFC in September. A third straight win for the Galaxy in October over their crosstown neighbors would see them potentially pull even with the playoff line going into the final two weeks of the season.

Download the FOX Sports App to get all of your news, scores, stats and more all in one place.