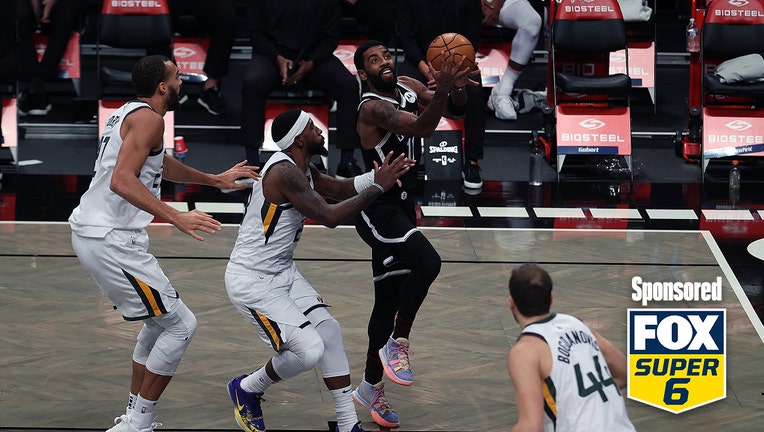 Kyrie Irving of the Brooklyn Nets shoots against the Utah Jazz during their game at Barclays Center on January 05, 2021 in New York City. (Photo by Al Bello/Getty Images)

Are you in or are you out?

Wednesday night is the final evening before NBA general managers have to push their chips into the middle of the table for the NBA trade deadline and declare whether they can make an honest run at an NBA title – or whether they're already looking ahead to next season.

Wednesday is also a really great night on the court, highlighted by the Celtics trying to get back on track against the Bucks, while the Nets travel to Utah to face the West-leading Jazz in a possible Finals preview.

You can enjoy that schedule a little bit more by playing FOX's Super 6 contest on the NBA. Just pick all six winners of games and the correct scoring margins, and you could win the $25,000 grand prize.

It’s easy to play on the FOX Super 6 app for your phone or tablet. And best of all, it’s free. Just download the app now and make your picks!

To get you ready to possibly win big, here’s the night’s schedule and what to watch for.

These are two teams clearly standing out as sellers and on the outside of the playoff race, although Indiana currently sits 10th and could end up getting into the play-in round.

Indiana allowed 140 points to Milwaukee on Monday night without Giannis Antetokoumpo. Still, the Pacers are favored to win by 6.5 points, according to FOX Bet.

With the Raptors calling Tampa home this season, this is the second game of a Florida swing for the Nuggets, who got 28 points, 15 rebounds and 10 assists from Nikola Jokic in a 110-99 win over Orlando on Tuesday night.

In fact, Jokic has averaged 30.3 points over the last three games, and with the injury to LeBron James, has surged into the lead in the MVP race.

The Raptors are in full-fledged sell mode, losing nine straight – including snapping Houston’s 20-game losing streak on Monday night – and reportedly taking calls on point guard and franchise baluster Kyle Lowry, who could be sought after heavily by his hometown 76ers and the Miami Heat. Add it all up, and Toronto is a 2.5-point underdog.

The Bucks are making their push in the East, hanging right behind Philadelphia and Brooklyn while creating separation with the rest of the conference. Antetokoumpo could be making an MVP run himself with both Joel Embiid and LeBron James on the sidelines with injuries – except Giannis’ left knee is acting up and his status for Wednesday night is uncertain.

Meanwhile, the Celtics are below .500 at 21-22 and have been brutal on the road, going 8-15 away from TD Garden. Jayson Tatum missed Monday night’s game with an illness, so his status is something to watch for on Wednesday, which is the first of back-to-back games against the Bucks at Fiserv Forum.

In the new expanded playoff formula, the Bulls are sitting ninth in the East and would get into the mini-tournament with a chance at getting into the main dance. They're also expected to win by six against the Cavs, according to the FOX Bet point spread.

However, Chicago has lost three of its last four. Zach LaVine continues to emerge as a superstar for the Bulls, putting up 28.2 points and 4.9 assists per game.

Meanwhile, Cleveland starts four straight on the road after losing on Monday night at home to Sacramento. Collin Sexton has played well, averaging 24.0 points a game.

A possible playoff preview in the West as the Clippers – who have a path in front of them to leapfrog the Lakers without James and Anthony Davis for the foreseeable future – head to Texas for the first of a back-to-back in the Alamo City.

Kawhi Leonard returns to his former NBA home after scoring 25 points in a 119-110 win over the Hawks on Monday night, with the Clips as 5.5-point favorites.

The Spurs have dropped back-to-back games to the Bucks and Hornets. Patty Mills had a great game against the Clippers the first time, scoring 27 in a 116-113 win on Jan. 3.

The shorthanded Nets play the second of three games out West without Kyrie Irving, who is missing the trip to deal with a family issue, and Kevin Durant, who is still bothered by a hamstring injury. Irving did have 29 to lead the way in a 130-96 win over Utah in January in Brooklyn.

Utah finally returns home for only its second game in Salt Lake City dating back to Feb. 24. Donovan Mitchell has been outstanding, averaging 31 points a game over the last four that has seen Utah go 3-1.