AUSTIN, Texas - No. 22 Texas doesn’t expect offensive production to come as easily as it did last week when Iowa State visits Saturday.

Texas (4-2, 2-1 Big 12) produced nearly 600 yards while pounding Oklahoma 49-0 in the Red River Rivalry. But that was against a reeling Sooners defense that ranks 117th nationally. 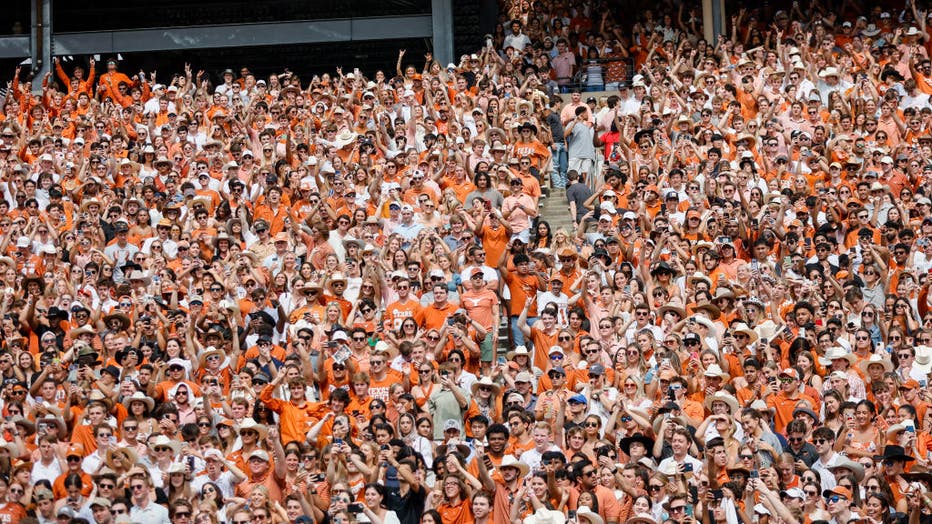 DALLAS, TX - OCTOBER 08: Texas Longhorns fans celebrate winning the game between the Oklahoma Sooners and the Texas Longhorns on October 8, 2022 at the Cotton Bowl Stadium in Dallas, Texas. (Photo by Matthew Pearce/Icon Sportswire via Getty Images)

Texas quarterback Quinn Ewers will be playing his second game since returning from a left shoulder injury that sidelined him a month. The Ohio State transfer threw for 289 yards and four touchdowns in three quarters against Oklahoma.

"Playmakers at all the skill positions," Iowa State coach Matt Campbell said. "They’ve gotten to where they want to be in terms of having those playmakers and kind of putting this offense to where it wants to be. And it is a challenge."

Offense has been a struggle for the Cyclones, whose 23.2 points per game rank last in the Big 12 and 103rd nationally. Xavier Hutchinson leads the nation with 9.5 catches per game but first-year starting quarterback Hunter Dekkers has cooled off since conference play began and the run game has suffered with Jirehl Brock injured the last two weeks.

The situation puts the onus on a defense that’s allowed more than 14 points just once, in a 31-24 loss to Baylor.

Iowa State scored only 11 points against Kansas and nine against Kansas State the last two weeks and went 16 straight possessions spanning those games without a touchdown.

"We’ve been juggling a lot of different players and trying to figure out, No. 1, who and what gives us the best opportunity to be successful," Campbell said. "Do I have faith that we will get where we need to be offensively? I really do. We have talented players."

McDonald lines up in different spots — left, right and even in the middle. When McDonald comes from the right, he’ll be matched against first-year freshman and five-star recruit Kelvin Banks Jr.

The Longhorns have improved defensively, going from 99th to 23rd in points allowed and from 100th to 35th in yards allowed. They’ve had one bad half, allowing 23 points during a 37-34 loss at Texas Tech.

"I love the way we’ve played complementary football," Sarkisian said. "I feel like it’s been that way for two weeks where we’re kind of feeding off of one another. Whether it’s getting a fourth-down stop and then converting that into points offensively, whether it’s going down and scoring and then getting a stop defensively so we’re not trading points with people."

Iowa State’s Brock was hurt on the fourth play from scrimmage at Kansas on Oct. 1. He returned last week to carry 13 times for 33 yards against Kansas State but couldn’t finish the game. Cartevious Norton has been out since the opener. Deon Silas has gotten most of the carries in Brock’s absence with Eli Sanders filling in.