AUSTIN, Texas - Hudson Card passed for three touchdowns, including two to Xavier Worthy, to lead Texas to a 38-20 win over West Virginia on Saturday night.

Card, who has started three straight games but may be replaced next week if freshman Quinn Ewers returns from a clavicle injury, finished with 303 yards passing. Ewers had earned the starting job before the season and started the first two games before he was hurt.

"I think over the past few weeks he’s earned a lot of respect," Texas coach Steve Sarkisian said. "To me, and our team, it doesn’t feel like we are playing with a backup."

Card shrugged off a question about the upcoming competition to remain the starter if Ewers is ready to return. He’s had his own injury struggles with a sprained ankle from back in the second game against Alabama, the same game when Ewers got hurt. 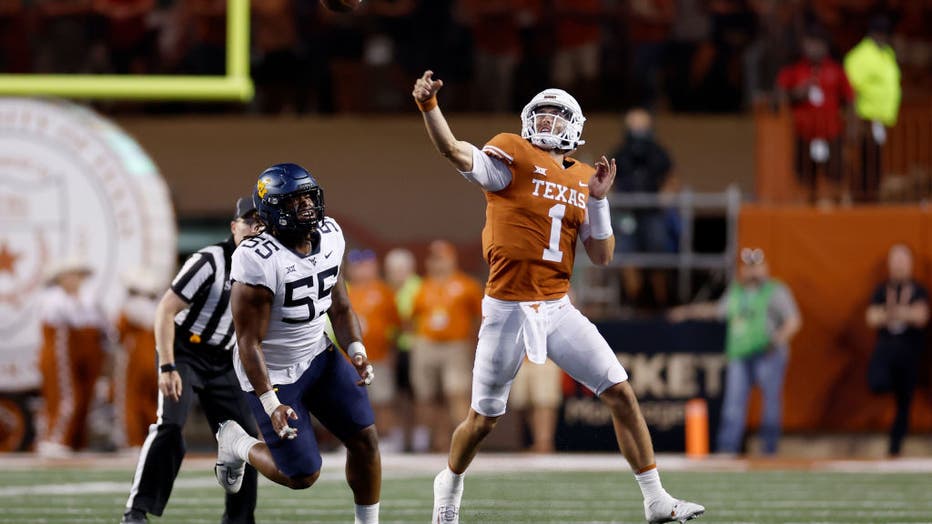 AUSTIN, TEXAS - OCTOBER 01: Hudson Card #1 of the Texas Longhorns throws a pass under pressure by Dante Stills #55 of the West Virginia Mountaineers in the second half at Darrell K Royal-Texas Memorial Stadium on October 01, 2022 in Austin, Texas. (P

Card looked confident stepping into the pocket under pressure and shook off several early hits. His 15-yard scoring pass to Worthy just before he took a hard shot to his midsection opened the scoring. Those two connected again early in third quarter when a leaping West Virginia defender let a deep pass slip through his hands and tipped it to Worthy as the Longhorns receiver was falling down.

Worthy also threw a touchdown pass to Ja’Tavion Sanders on a trick play in the second quarter. Card admired the receiver’s arm strength and accuracy.

JT Daniels passed for 253 yards for West Virginia (2-3, 0-2). The Mountaineers got a scare in the third quarter when freshman running back CJ Donaldson was carted off on a stretcher after taking a blow to the head. His helmet and shoulder pads were removed, but he appeared to give a "thumbs up" signal with his right hand as he was taken off the field.

About an hour after the game ended, West Virginia announced that Donaldson had been cleared to travel home with the team.

"We’ve got a hurt football team in there for multiple reasons, that being the first and foremost," West Virginia coach Neal Brown said. "That was scary." 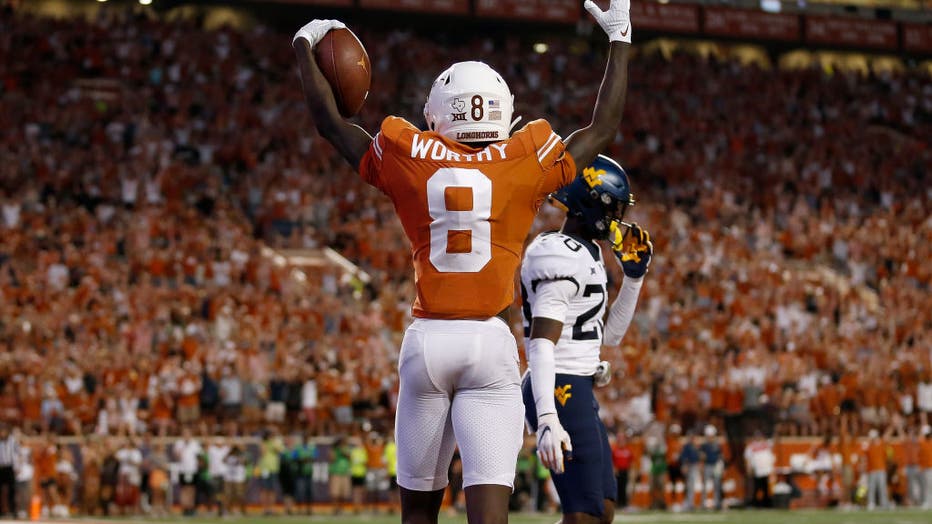 AUSTIN, TEXAS - OCTOBER 01: Xavier Worthy #8 of the Texas Longhorns reacts after a touchdown reception in the second half against the West Virginia Mountaineers at Darrell K Royal-Texas Memorial Stadium on October 01, 2022 in Austin, Texas. (Photo by

West Virginia: The Mountaineers’ early plan abandoned the pounding run game that had helped win the previous two games. West Virginia came in averaging 217 yards on the ground but eight of the first nine plays were pass attempts. By the time the Mountaineers were down 28-0, it was too late to return to a grind-it-out attack. West Virginia finished with 61 yards rushing.

"We knew we would get their best," Brown said. "We just didn’t make any plays in the first half."

Texas: A defense that couldn’t get off the field in the second half and gave up six fourth down conversions in a loss a week earlier to Texas Tech was dominant and aggressive up front against the Mountaineers. Texas snuffed West Virginia’s fourth down attempt on the second series, and forced four punts in the first half. The Longhorns sacked Daniels three times.

"I just love the way our team is playing coming off a tough loss," Sarkisian said. "We were getting off the field ... It’s a mindset, a mentality, It’s about focus and energy. We got the response we were looking for."

Worthy had a slow start in the offense but has cranked it up the last two weeks with three touchdowns. He had a long catch of 45 yards and his ability to stretch defenses can open up the entire field. And with the possible return of the strong-armed Ewers, he could get even more thrown his way.

Texas plays No. 18 Oklahoma in Dallas next Saturday.