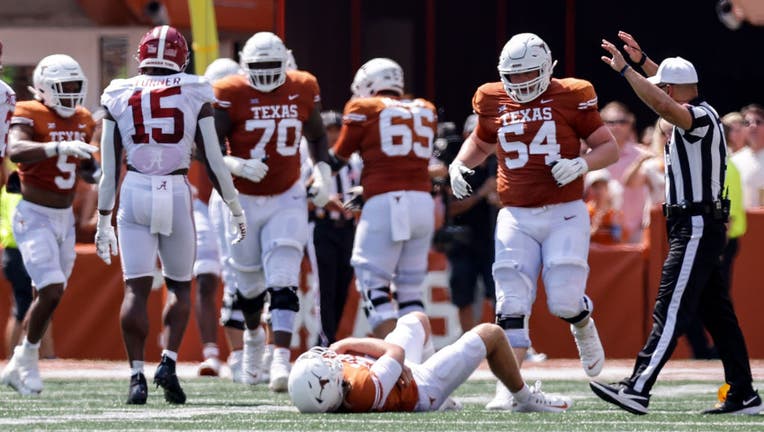 AUSTIN, TEXAS - SEPTEMBER 10: Quinn Ewers #3 of the Texas Longhorns lays injured on the turf after a late hit by Dallas Turner #15 of the Alabama Crimson Tide in the first half at Darrell K Royal-Texas Memorial Stadium on September 10, 2022 in Austin

AUSTIN, Texas - Texas has been here before: a quarterback with a hot hand knocked out of the game early against Alabama.

Longhorns will never forget Colt McCoy getting injured in the 2009 season national championship game. Alabama went on to win the first of six national titles under Nick Saban while Texas fans spent the next 13 seasons asking "what if?"

On Saturday, Texas quarterback Quinn Ewers had already passed for 134 yards and had Texas near the Crimson Tide goal line when a hard hit by Alabama’s Dallas Turner knocked him out of the game with a sprained clavicle.

Texas coach Steve Sarkisian said after the game that Ewers would get further tests to determine how serious the injury is.

Turner drew a personal foul for the hit when he drove the quarterback into the ground after the ball was thrown away. Ewers laid on the field for several minutes. He was able to walk off the field but went straight to the medical tent before heading to the Texas locker room with a towel over his head. He returned to the Texas bench in the second half in street clothes.

Ewers was one of the top-rated quarterbacks in the country coming out of high school and initially signed with Ohio State. He transferred to Texas after last season and beat out Hudson Card for the starting job.

Card played the final three quarters against Alabama and passed for 158 yards, but he also was hobbled by a hard hit and spent much of the second half with a visible limp.

"You lose your starting quarterback, that’s never fun," Sarkisian said. "Then your backup gets in the game and he’s halfway injured."

Sarkisian said Card "handled it great," adding, "he had a couple of big completions, a couple of big scrambles. You come in those type of situations, they are never easy."