Ewers’ third touchdown, a 3-yard pass to Xavier Worthy, put Texas up for good with 4:43 remaining.

Ford ended Iowa State’s chance to re-take the lead, recovering a fumble by Cyclones quarterback Hunter Dekkers deep in Texas territory with 2:28 to play. Moments earlier, it looked like Iowa State might move back in front, but spectacular receiver Xavier Hutchinson dropped a pass at the Longhorns 9-yard line.

Bijan Robinson rushed for 135 yards, his fifth straight game exceeding 100 for Texas (5-2, 3-1 Big 12). The Longhorns snapped a three-game losing streak against the Iowa State. The Cyclones (3-4, 0-4) have lost four straight. 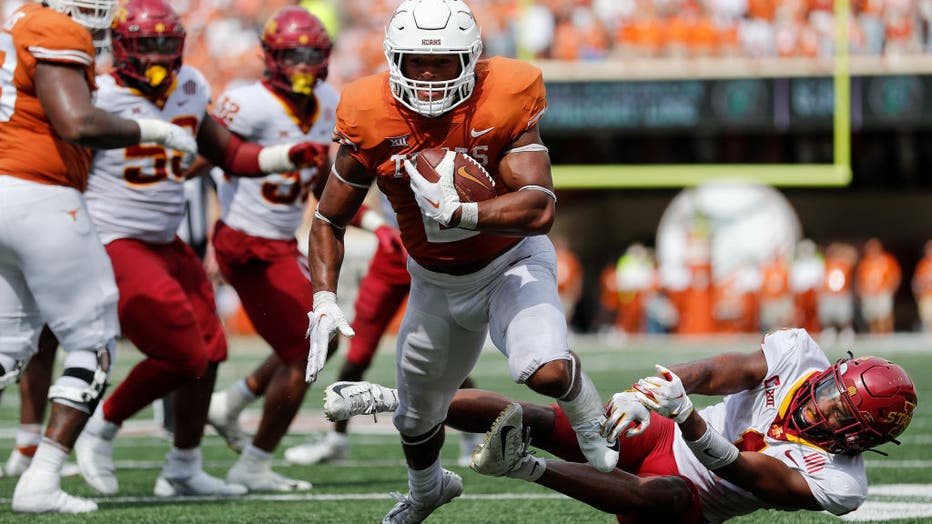 AUSTIN, TEXAS - OCTOBER 15: Roschon Johnson #2 of the Texas Longhorns breaks a tackle by Anthony Johnson Jr. #1 of the Iowa State Cyclones in the fourth quarter at Darrell K Royal-Texas Memorial Stadium on October 15, 2022 in Austin, Texas. (Photo by

Iowa State, whose offense has struggled to score this season, had an opportunity to go up 14-0 six minutes into the second quarter. But Dekkers’ pass was intercepted in the end zone by Ford.

The Longhorns then moved 80 yards to tie the game on a 15-yard pass from Ewers to Worthy. Less than six minutes later, Ewers then connected with Jordan Whittington for a 5-yard touchdown.

Texas added a field goal in the third quarter but could not put Iowa State away. First, Dekkers found sophomore Jaylin Noel over the middle for a 54-yard touchdown, his second of the game.

Iowa State: The Cyclones, who rank 104th in scoring offense, failed to get a on 18 straight possessions in their past three games. The streak stopped on their third series against the Longhorns with a 5-yard pass from Dekkers to Noel in the first quarter. Dekkers passed for 329 yards, and Hutchinson made 10 receptions for 154 yards before the drop.

Texas: The Longhorns were outgained in the passing game. Ewers threw for just 172 after passing for 294 and four touchdowns against Oklahoma last week. Ewers lost what could have been a 58-yard touchdown in the third quarter when a wide open Casey Cain dropped a pass down field. But Texas showed the resiliency to come back and win.