Buccaneers season preview: Does the talent match the hype?

TAMPA, Fla. -  Move over Dallas; the Tampa Bay Buccaneers are now America’s Team. At least, that’s what it seems like now that Tom Brady has taken the helm of the Bucs’ ship and some other big names have jumped aboard.

No team has ever played for a Super Bowl in its home stadium, but that’s exactly what Brady and the Buccaneers are hoping to do this season – another first in a strange and unprecedented year.

And while there may not be any fans in the stands for the Bucs’ first home games, that doesn’t mean the bandwagon isn’t full. Here’s what you need to know about the 2020 Tampa Bay Buccaneers. 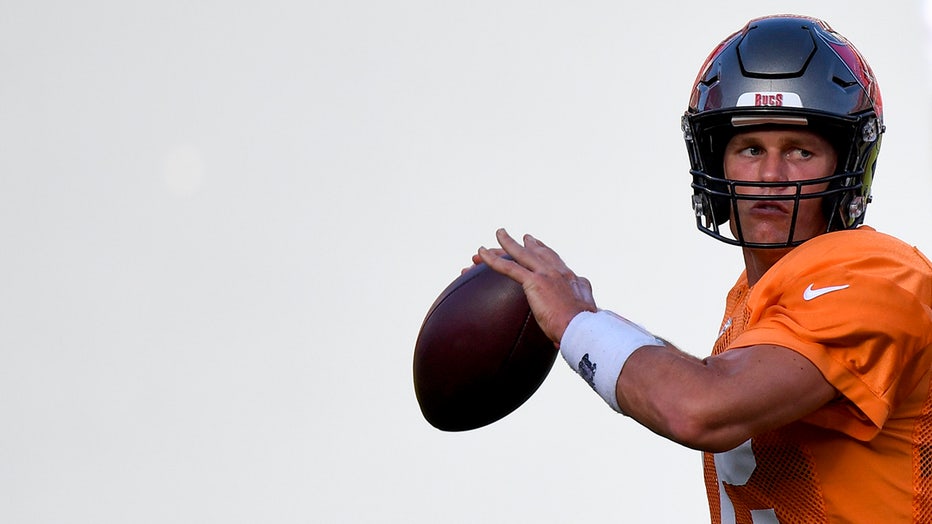 Before he throws his first end zone-bound fade to a leaping Mike Evans or whistles one through traffic into the sure hands of Chris Godwin, Tom Brady is already the greatest free agent acquisition in Tampa Bay sports history. Whether he hoists the Lombardi Trophy for a seventh time in his career or not, Bucs fans have already been jolted in ways usually reserved for a Florida thunderstorm.

Since Head Bucco Bruce Arians channeled his inner-Monty Hall to reveal what was "behind door number two," everything changed. Brady’s arrival brought citywide excitement and heightened media coverage in the midst of a COVID-19 lockdown. Suddenly, the most decorated player in NFL history was living in our community, working out in our parks and schools, and -- on one occasion -- walking into our homes.

Coach Dungy offers his thoughts on Tom Brady joining the Buccaneers and what effect the coronavirus shutdown will have on the team and the NFL.

Most importantly, it was clear, Brady’s intention was not to simply settle into comfort and ride out his contract by dipping his 43-year old toes in the sand. Tommy Brady is not quite ready for Tommy Bahama. Twenty incredible chapters written in New England but a new chapter starting in Florida -- a golden opportunity to prove his methods true, that the TB 12 method can even cure a 12-year playoff drought. If so, go ahead and call it "Tompa Bay."

No longer the Tampa Bay Buccaneers, they’ve become the Brady-led Bucs -- a statement of fact and sales pitch rolled into one. NFL free agents contemplating Tampa now had to at least wonder what it would be like to play with the GOAT. It did not take long to see the Brady-effect at work.

Like a clarion call into the wilderness, Rob Gronkowski chipped off the rust of retirement. Every Canton-worthy memory and confetti-strewn parade in his nine-year Patriot career tied him to Brady. If there was ever a time to reunite for another run at glory, it was now.

Gronkowski brings new element of fun to the game

Bruce Arians says this the most fun he's had coaching in a long time, partly due to Rob Gronkowski.

Gronkowski arrived at Brady’s player-only workouts reinvigorated, pain-free after a year away. Gronk’s arrival not only bolsters Brady’s confidence but bolsters a tight end room that is as formidable as any in the league, with O.J. Howard and Cameron Brate.

The Bucs’ run game was also reinforced with the addition of six-time Pro-Bowler LeSean McCoy -- a needed set of reliable hands out of the backfield and a veteran voice, in a young group of RB’s. McCoy’s numbers may not look like the Shady McCoy of years past, but Arians has nonetheless guaranteed a pivotal role for the 12-year vet.

The Buccaneers added another Super Bowl champion to the mix.

Then, as if Arians and GM Jason Licht were rocking the local bar on a Saturday night, an encore, one last splash -- the signing of Leonard Fournette. The former Jaguar running back, released at the end of training camp by Jacksonville, was quickly added to the Bucs' bursting arsenal of offensive weapons.

Any notion that Fournette’s falling out in Jacksonville might be a foretaste of what’s to come in Tampa was sharply dismissed by Arians. "No. The people that I really, really trust gave him high, high marks in everything that I care about. I can't say what's going on in Jacksonville, but all I can say is what's happening in Tampa [and] he'll fit right in."

Alas, there is no change quite as consistent as that of a Buccaneer kicker. Whether drafted too high or paid handsomely through free agency, Tampa Bay is a transitional home and the south end zone takes no prisoners. After a camp-long kicking competition between incumbent Matt Gay and challenger Elliot Fry, Bruce Arians scrapped them both for veteran Ryan Succop. The longtime Tennessee Titan enters the season as the ninth Bucs kicker in the last nine seasons.

Start in the trenches, where the Bucs return four of their starting five offensive lineman from 2019. Left guard Ali Marpet leads the unit, but feisty center Ryan Jensen has given them some nastiness in the middle. Gone after a decade at right tackle is Demar Dotson and in steps the 13th selection in the 2020 draft, Iowa’s Tristan Wirfs. One of the highest paid offensive lines in the NFL, they’re expected to not just earn their keep protecting Brady but also be protected themselves thanks to Brady’s quick decision-making in the pocket.

Summer sweat is no match for Ryan Jensen

Bucs veteran center Ryan Jensen learned right away that a dry football is the key to keeping Tom Brady happy.

Tampa Bay has had offensive weapons for several years, but the thought of putting those weapons in the hands of Tom Brady is what keeps Offensive Coordinator Byron Leftwich smiling. Mike Evans leads the group with six consecutive 1,000-yard seasons under his belt, sharing that accomplishment with only Randy Moss. Evans will be the best receiver Brady has had since, well, Moss.

Evans is also one of the most unselfish number-one receivers in the league, which is evidenced by the rise of Chris Godwin. Godwin is a legitimate number-one in his own right, coming off a Pro Bowl 2019 with over 1,300 yards. Godwin’s role in the slot, in the Arians offense, will keep him in the Pro Bowl mix for years to come.

Chris Godwin wore number 12 in college at Penn State, and he wore number 12 for his first three years as a Buccaneer. But he was happy to give it up to the new guy.

Though the cupboard is full at running back, third-year back Ronald Jones has a leg up on the others. Arians has named RoJo the starter, saying it’s his job to lose. Jones made a giant leap forward from his rookie campaign of just 44 yards rushing compared to 724 yards in year two. During training camp, the coaching staff praised Jones’ improvement in key areas like catching and pass protection, giving Arians the belief that Jones can be a solid all-around back.

Here's why Bruce Arians has picked Ronald Jones as his main running back heading into the 2020 season.

Flying under the radar amid all the Brady hype is a defense that returns intact from 2019, and poised for a breakout 2020.

The Bucs re-signed every key defensive player from last season, starting with the NFL sack leader in Shaq Barrett. Barrett thrived in Todd Bowles’ attacking defense, shattering the team record 17.5 sacks, held by Hall of Famer Warren Sapp for nearly two decades. Barrett finished 2019 with 19.5 sacks and signed a franchise tag, with hopes of a long-term contract to come.

The NFL's reigning sack champion got a different feel walking into a season that's under the threat of COVID-19.

Opposite Barrett at outside linebacker is Jason Pierre-Paul, coming into his 11th year with a freshly signed two-year contract. JPP is a leader in the locker room and a difference-maker on the field. Last season, Pierre-Paul missed the first six games with a neck fracture and still tallied 8.5 sacks in 10 games.

Along the interior D-line, Ndamukong Suh returns on a new one-year contract, paired with third-year tackle Vita Vea. They combine for over 600 pounds of line-moving muscle that regularly takes on double teams and frees the Bucs’ speedy linebackers to make plays. Suh and Vea are as much to credit for the record-shattering 2019 run defense as any group.

After years of tangling with Tom Brady, Buccaneers defensive tackle Ndamukong Suh is enjoying sharing a sideline with his new teammate.

The Bucs' linebacking corps features one of the best inside tandems in the game. Lavonte David enters year nine with the word most frequently used to describe him as "underrated." However, inside the Bucs’ locker room and those that watch film, David’s play commands respect.

He’s leading the team in tackles eight of his nine seasons, setting the franchise record in tackles for loss, and is three forced fumbles shy of Derrick Brooks’ forced fumble record (24), with about 100 fewer games.

David’s tag team partner on the second level is second-year linebacker Devin White. The former fifth-overall pick clearly demonstrated why he was selected so high in the final five games of his rookie season, recovering four fumbles and returning two for a score, forcing another fumble, and intercepting a pass.

The Bucs’ young secondary has had the benefit and the curse of learning on the job. The most veteran among the projected starters are third-year corner Carlton Davis and safety Jordan Whitehead. Davis regularly holds his own against some of the best wide receivers in the league, the likes of DeAndre Hopkins and Julio Jones. Arians says Davis is ready to make a name for himself. "He's one of the top 10 guys – in my opinion – right now."

As for the youngest of the group that Defensive Coordinator Todd Bowles referred to as "young puppies," Sean Murphy-Bunting and Jamel Dean led the way in interceptions last year as rookies. Now another year older, with a lot more bite.

Regardless of whether or not Tom Brady jumped aboard the pirate ship, this Bucs team was talented enough to make a run at the playoffs. The offense was potent and the defense was promising.

But this is 2020, and everything is different. 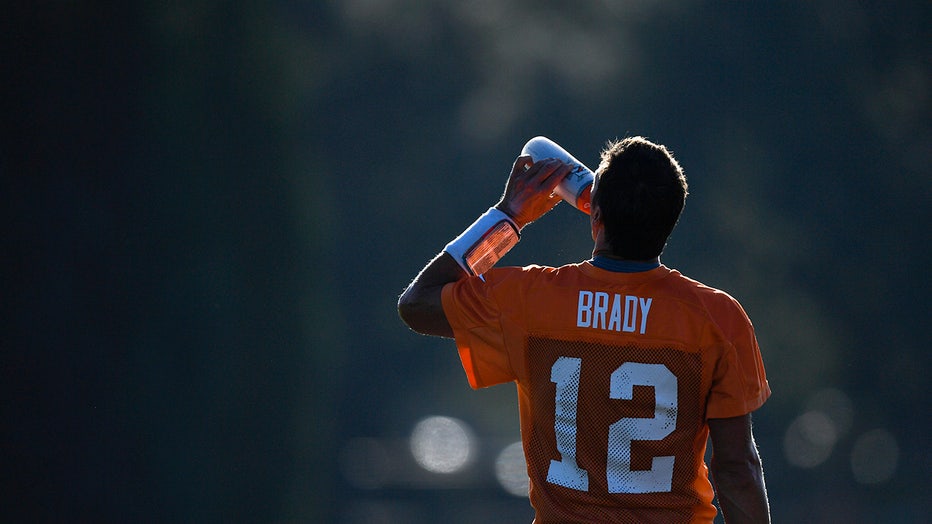 The ageless Captain Brady is now navigating the open seas, hands gripped to the wheel. Every Bucs fans has Super Bowl hopes sloshing to and fro. Where they are heading, no one knows. There is plenty of hope that the destination is where Captain Brady has ended up so many times before – six times to be exact. I believe this year’s location might even have a place to dock the ship.

RELATED: Get an inside look at the new FOX Sports app with Hall of Fame broadcaster Joe Buck

The Buccaneers open their season against the division-rival Saints in New Orleans this weekend. You can catch America's Game of the Week on FOX, Sunday at 4:25 p.m. Eastern.