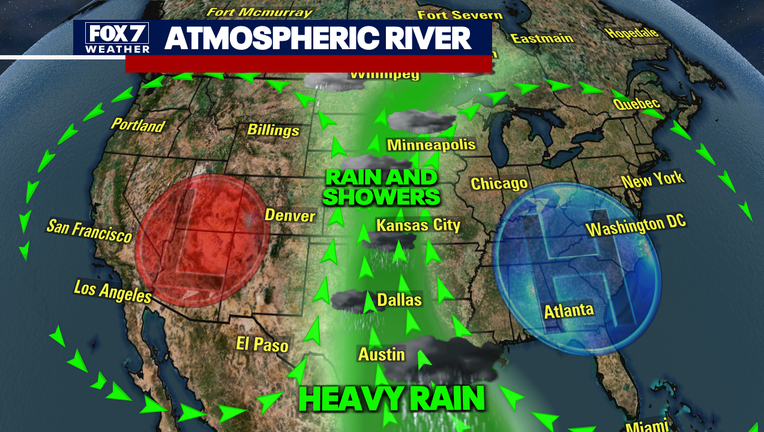 They vary in size, depth, and how fast they flow, but rivers can also occur in the atmosphere.

AUSTIN, Texas - When you hear the word river, you think waterway.

They vary in size, depth, and how fast they flow, but rivers can also occur in the atmosphere.

An atmospheric river works in the same way a normal river does, but the water being transported is water vapor and not liquid water.

These weather patterns can transport trillions of gallons of water over thousands of miles.

California, Washington State, and Oregon all depend on these massive ‘fire hoses’ of rain, snow, and moisture for much of their yearly precipitation.

However, every so often an atmospheric river can occur east of the Rockies, even in Texas.  When that happens flooding and flash flooding becomes a huge threat.

The transition from rescue, escape, to recovery took less than 24 hours.

That moisture is pushed northward by the large-scale rotation of the two pressure systems which act as gears to move the moisture along.

Inside this narrow band, typically a couple of hundred miles wide, steady, moderate to very heavy rain will fall over the same area for a prolonged period of time.

When these rivers move over land they can produce tremendous rainfall amounts and attendant flooding concerns.

In 2016 an atmospheric river helped fuel a storm over Louisiana that dropped over two feet of rain on Baton Rouge and surrounding areas, causing catastrophic flooding and $10-15 billion in damages.  In California, 24-hour rainfall amounts in excess of 10 inches are routine during atmospheric river events.

Thankfully atmospheric rivers are fairly rare east of the Rocky Mountains, but they do happen.

A large-scale weather system characterized by high pressure over Georgia and low pressure over California, like what is expected this weekend, can bring very heavy rain and flash flooding.