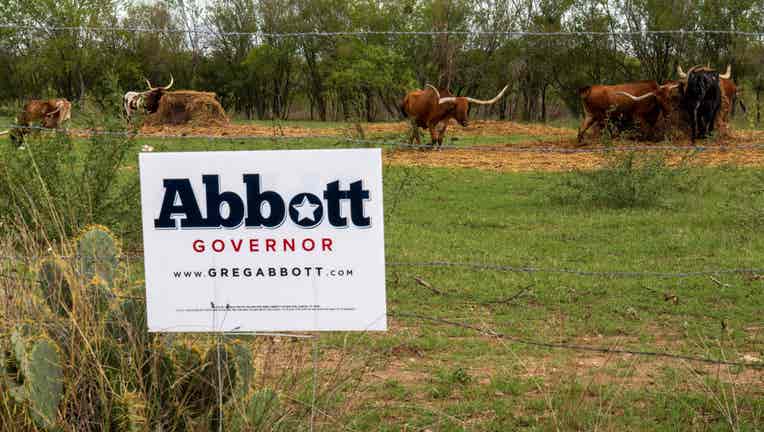 A campaign sign for Texas Governor Greg Abbott is posted by a Longhorn cattle farm outside of Austin, Texas on November 7, 2022. (Photo by Suzanne Cordeiro/AFP via Getty Images)

Voters returned GOP incumbents to their jobs at the top of the ticket and handed the state’s dominant party its 14th consecutive sweep of statewide offices. Republicans also seemed poised to add slightly to their majorities in the Texas Legislature, where they’ve controlled both chambers for 20 years, and held large leads in all statewide judicial races.

"Tonight Texans sent a message that they want to keep the Lone Star State the beacon of opportunity that we provided over the past eight years," Abbott wrote on Twitter on Tuesday evening.

The GOP’s success in Texas, even as it fell short of expectations nationally, signaled voters’ endorsement of Abbott following a second term marked by aggressive actions on the border and immigration, conservative positions on LGBTQ and other social issues and a near-total ban on abortion. And it was another rebuke of Democratic gubernatorial nominee Beto O’Rourke, who lost his third election in four years.

"Voters seem to be fine with the status quo," said Drew Landry, assistant professor of government at South Plains College in Levelland, west of Lubbock.

If Democrats have anything to show for this election, it’s that they won two of three congressional seats up for grabs in South Texas — denying Republicans their hopes of statement victories in a heavily Hispanic region. Hispanic residents now represent the largest ethnic group in Texas, surpassing non-Hispanic white residents earlier this year in a census estimate.

Incumbent Greg Abbott returned to McAllen to declare victory in the race for Texas Governor, a campaign in which he made border security a top issue.

The state’s shifting demographics had given Democrats hope, as margins at the top of the ticket have shrunk in recent years. In Abbott’s first bid for governor in 2014, he won by more than 20 percentage points. In 2018, he won his second term by just over 13. And Donald Trump won the state by less than 6 percentage points in 2020. Tuesday night, that Democratic progress seemed to halt. Abbott appeared likely to win by a similar margin as in 2018 — possibly larger.

Record-breaking midterm turnout in 2018 was largely due to O’Rourke’s run for Senate and anti-Trump mobilization among Democrats, and the turnout brought them closer to victory than in previous cycles.

But the party couldn’t replicate it this time around, in spite of O’Rourke again leading the ticket as well as lingering anger over the Jan. 6, 2021, insurrection by Trump supporters and a widely criticized law enforcement response to the May 24 school shooting in Uvalde.

Democrats have always asserted, and polls have suggested, that bigger turnout at the polls would lead to Democratic victories. Mediocre turnout on Tuesday may be one of the biggest reasons that Democrats didn’t see a stronger advantage come from Texas’ recent population explosion, said Renee Cross, senior director of the Hobby School of Public Affairs at the University of Houston.

"To truly feel the effects of a demographic change, whether it’s young voters or new people coming in from perhaps more liberal states, people are going to have to turn out to vote," Cross said. "I’m looking at some numbers across the country and some places have record midterm turnout, and we just didn’t do it in Texas. They just didn’t vote, period."

"There was a lot of posturing by some Republicans that they’d hit the trifecta in South Texas by taking all three seats, so Democrats have felt maybe a tiny bit of relief at that," Cross said.

U.S. Rep. Mayra Flores, a Republican who lost the South Texas seat she had won in a special election earlier this year, blamed apathy by conservative voters as well as independents who had heavily leaned Republican in Texas polling.

"The RED WAVE did not happen," Flores wrote in a fiery Tweet after her apparent defeat on Tuesday. "Republicans and Independents stayed home. DO NOT COMPLAIN ABOUT THE RESULTS IF YOU DID NOT DO YOUR PART!"

The one South Texas congressional seat Republicans did claim, with the victory of Monica De La Cruz, was in a district drawn in 2021 to help a Republican win.

Still, the failure of the Democrats to break a 28-year losing streak for statewide office shows the party has a long way to go.

Even if Republicans aren’t seeing their map expanding into new territory like South Texas, they can still clearly count on rural voters to hold the line against waves of new and potentially liberal voters moving into Texas’ major cities, said Landry, the West Texas college professor.

"As large as the cities are and how Democratic that they are, Texas Democrats still don’t have a way to get past that red wall of rural West Texas," he said. "Rural Texas still rules the day. I was seeing some very, very close numbers before a lot of the rural counties reported [election returns], and once they did, it just blew the door open for Abbott and [Lt. Gov. Dan] Patrick and all the others."

Democrats had hoped this season’s political fervor over abortion rights, the deadly blackout during the 2021 snowstorm, gun violence and the economy would help them overcome a generation-long losing streak in Texas’ halls of power.

5.4 million ballots have already been cast in Texas during early voting, but that number is lower than it was in the last midterm election.

Texas led the nation in restricting abortion rights even before the U.S. Supreme Court removed the constitutional right to it last summer by overturning Roe v. Wade. Abbott began busing undocumented immigrants to other states last spring and has steered $4.4 billion toward his Operation Lone Star mission along the Texas-Mexico border — moves that drove Democrats to accuse him of spending taxpayer money on political stunts.

Hundreds of Texans died and millions more lost power for days when the state’s electrical grid crashed during a snowstorm in 2021. Democrats blamed Republican-appointed regulators for failing to prepare the grid for disasters.

The shooting of 19 children and two adults at a Uvalde elementary school in May touched off criticism of Republicans’ support of gun rights and gave Democrats hope that voters would agree the GOP had failed Texas children by repeatedly refusing over the years to limit access to firearms.

But Republicans were buoyed by a backlash over high prices at the gas pump and grocery stores, opposition to President Joe Biden’s immigration policies and fights over rising crime — particularly in rural Texas, where the GOP won its strongest margins of the night, Landry said.

"Those things are what got a lot of those voters excited," Landry said. "Abbott did a really good job of tying O’Rourke with Biden and the border crisis and them being on the same page, and voters bought it."

By the end of the night, the state Democratic Party had acknowledged in a press release that "this was a tough cycle." But in a joint statement, party officials urged their supporters to "get back in this fight" starting Wednesday.

"We refuse to throw in the towel and give up on a state as remarkable, freedom-loving, beautiful, diverse, industrious, and trailblazing as Texas," they said.

Disclosure: University of Houston has been a financial supporter of The Texas Tribune, a nonprofit, nonpartisan news organization that is funded in part by donations from members, foundations and corporate sponsors. Financial supporters play no role in the Tribune's journalism. Find a complete list of them here.