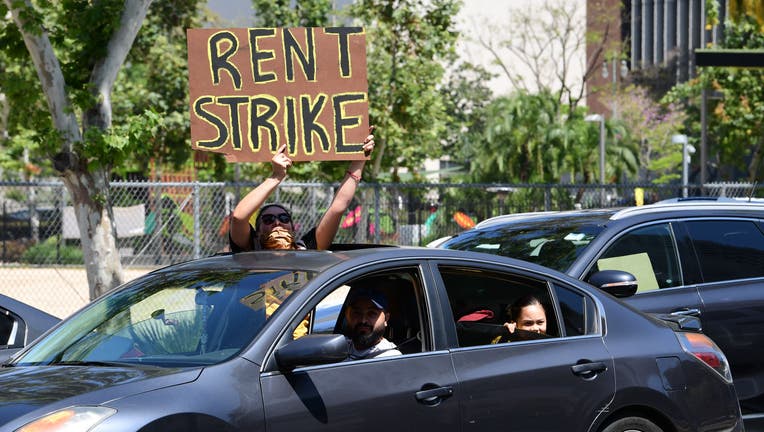 Demonstrators pass the Los Angeles City Hall on May 1, 2020, as they call for a rent strike during the coronavirus pandemic. (Photo by FREDERIC J. BROWN/AFP via Getty Images)

LOS ANGELES - It’s the first of the month and the rent is due. But, tenants in the nation’s biggest cities are striking because they simply can’t afford to pay the rent, as many have been left without jobs due to economic fallout from the coronavirus pandemic.

Tenants who are now jobless are being forced to choose between paying rent and feeding their families. Strikers are hoping to send a message en masse to government officials that will persuade them to cancel all rent and mortgage payments for the duration of the pandemic. Simply pausing payments until a later date is not going to work, they say, and lawmakers are the only ones with the ability to make a change.

“The United States Congress and President Trump have the capacity to do this,” said Sean Weber, the creator of a petition on Change.org that calls for the federal government to provide mortgage assistance directly to loan agencies. “If they don’t – well that's the better question – what will happen? What happens to all of these banks and lenders and renters when this crisis worsens?”

Weber, a resident of Santa Clarita, California, said it’s an unprecedented move, but a necessary one, and is also calling for a 90-day forgiveness program for all renters and landlords that owe payments on commercial and residential properties, so that everyone from renters to loaners are covered in the interim.

Indeed, total payment relief seems to be the universal call that is uniting tenants and landlords alike.

“We don’t want to ever have to pay back the rent we’ve lost because the reality is that this economic crisis is going to last far longer than the public health crisis,” Cea Weaver the coordinator for Housing Justice for All, a New York-based group of tenants and housing activists, told FOX Business.

Weaver said the organization is working with 57 buildings in New York City with more than 1,000 of those residents participating in Friday’s rent strikes. Another 12,000 people have signed up online to participate in the “mass non-compliance action,” which even includes individuals who can afford to pay rent, but choose not to do so in order to further the cause.

In total, an estimated 20,000 New Yorkers are expected to participate in the rent strike. Thousands more will participate in some of the nation’s largest cities. To provide a scope of how the numbers might look, last month, nearly a third of the country’s renters did not pay any of their April rent during the first week of the month.

The protesters’ biggest complaint is that state and local lawmakers aren’t recognizing the breadth of the issue and that their cries for help are going unheard – or ignored. Indeed, there’s been very little legislation to give any sort of relief to tenants and landlords since the coronavirus outbreak. In New York City, Mayor Bill de Blasio has called for a rent freeze and temporary eviction halts that are set to expire in June. New York Gov. Andrew Cuomo said the state’s government has “a number of options” for when the eviction moratoriums expire in June, but has not elaborated on what those plans might be. In California, Gov. Gavin Newsom has banned evictions through the end of May.

But tenants say this isn’t enough.

Cities across the country are limiting the commission fees delivery services charge restaurants during the coronavirus pandemic.

“We’re advocating for a full rent cancellation,” said Alexz Graves, a member of Action: NYC Rent Strike. “A rent freeze is similar to what Gov. Cuomo has already provided us, which would mean that we'd still owe backlogged rent in the future. But that's not going to work for a lot of New Yorkers.”

Democratic presidential candidate Joe Biden addressed the issue on Wednesday, calling for a rent freeze and a suspension of evictions for the time being.

“With rent due in a few days and folks across the country worried they won't be able to make their payments, it's clear more needs to be done to provide relief,” he wrote in a tweet. “We need to freeze rent immediately for people who have lost their jobs and place a temporary ban on evictions.”

But, in not paying rent, protesters are affecting another group of individuals who rely on collecting the payments each month: landlords. Landlords use the rent money to pay for building maintenance, utilities and the mortgages on the buildings themselves. Data from analytics firm Black Knight shows that 3.4 million homeowners now stand in forbearance, which means they have temporarily paused or lowered their mortgage payments. This, in turn, puts pressure on the banks and lenders who provide the loans in the first place.

“A full-blown rent strike, whether the resident can pay or not, would shut my buildings down, which would only hurt my residents,” said Deborah Pusatere, chief executive of DeKita LLC. “I am working with my residents making payment arrangements, as many still haven't received unemployment, and can only wait to see what May rent collection brings.”

Pusatere runs 63 units in Albany, New York, that are all occupied by renters. She says her rent collection has fallen 35 percent since March, resulting in her inability to pay her next tax bill, keep the lights and heat on in the buildings and pay the mortgage.

“I am praying the federal government throws us a lifeline and realizes our struggles and the position we are in,” Pusatere said.

In addition to relief for tenants, strikers are advocating for a broad relief package that would cover both landlords and lenders to minimize the fallout across the housing market.

Weaver said her organization is calling for a hardship fund for landlords as well as resources that will keep the housing market in a stable condition.

“We just don’t think that the burden of proof should be on the renters to have to prove that they’ve lost income,” she said. “We want landlords to open their books to show to the state and we want there to be access to resources for the real estate industry.”

But with very little being done about the situation for now, landlords and renters could be waiting a long time for any kind of relief.

Weber, for one, remains hopeful that if the ears of federal lawmakers can be reached and some kind of legislation for payment relief passed, the housing industry can avoid another situation similar to the one that occurred in 2008.

“This is a means to prevent that from happening," Weber said. "This is the only solution that could actually save our economy."