Alex Jones' trial is being pushed back as InfoWars seeks out bankruptcy protection.

AUSTIN, Texas - Judge Maya Guerra Gamble pushed back Alex Jones' trial to decide how much he should pay the families of Sandy Hook victims, because Jones' company sought bankruptcy protection.

Jones lost defamation lawsuits in Texas and ​Connecticut for claiming the massacre that killed 26 people in 2012 was a hoax.

"Money can't correct the damage that was done. This whole thing, this lawsuit I have, is not about money. It's about holding him accountable for what he did and said," Neil Heslin, the father of one of the victims, said previously.

Attorneys for Sandy Hook families have accused Jones of trying to hide millions of dollars in assets.

In the court filing, InfoWars said it had assets of $50,000 or less, and that liabilities could be $1 million to $10 million.

Creditors on the bankruptcy filing include relatives of some of those killed in the massacre.

FOX 7 asked bankruptcy attorneys about their take on the case.

"The case cannot proceed until either the bankrupt debtors are removed from the case or the bankruptcy judge gives permission for the case to go forward," Stephen Sather, Bankruptcy Attorney at Barron & Newburger P.C., said. "This is a very strategic move. They're trying to protect, you know, one piece of the Jones empire, which is the intellectual property of domain names." 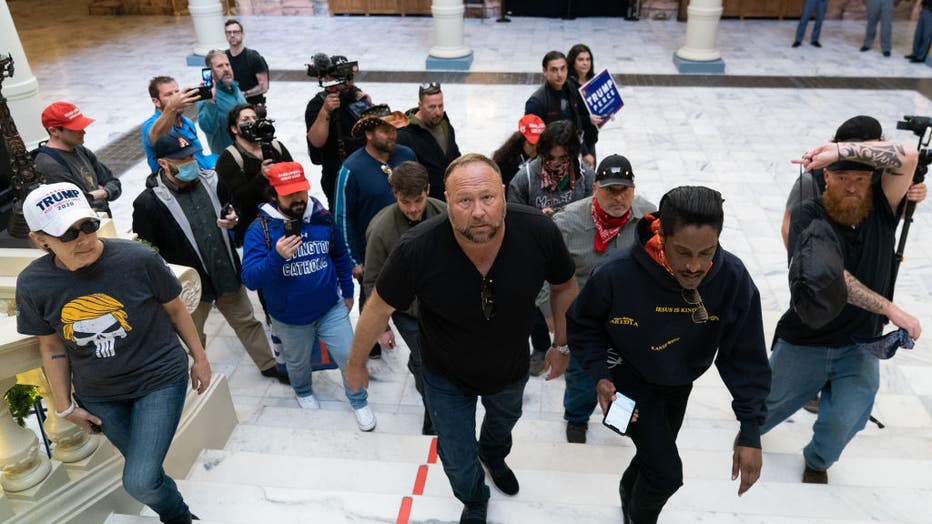 ATLANTA, GA - NOVEMBER 18: Alex Jones, host of Infowars, an extreme right-wing program that often trafficks in conspiracy theories, is seen inside the Georgia State Capitol during a "Stop the Steal" rally against the results of the U.S. Presidential

Bill Reid, a law professor at University of Texas, says two things stick out to him. One is that the company is filing in Victoria, Texas, rather than Austin. He says there's only one federal bankruptcy judge there.

"In filing in Victoria, they knew they would get him. So apparently they think perhaps this [judge] would be somehow favorably disposed to their situation," he said.

Reid says another point that sticks out is a way for Jones to get out of liability.

"They're using a relatively new provision of Chapter 11 of the bankruptcy code called Subchapter Five, which allows for, among other things, a provision of a discharge even for Mr. Jones individually, which is not something generally available in bankruptcy," he said.

If the bankruptcy was dismissed, then everything would go back to the way it was and the trial would move forward.

"If the bankruptcy is allowed to stand, it almost doesn't matter who determines the liability, because the way this thing is set up is that all Mr. Jones and his companies are willing to pay or going to pay under this plan is $7.7 million, that's it, end of story," Reid said.

FOX 7 reached out to the attorney for Jones, as well as InfoWars, but have not heard back. On Monday, Jones told InfoWars listeners he was "totally maxed out" and asked them to donate money and buy his nutritional supplements.