An estimated 100,000 people have gathered on Auditorium Shores to take in the concert and fireworks.

AUSTIN, Texas - On a steamy Fourth of July evening, tens of thousands of people gathered along Austin's Auditorium Shores to enjoy live patriotic music and a spectacular fireworks show.

"This is an annual tradition here in Austin. We have around 100,000 people that come down," said Austin Symphony CEO David Pratt.

That crowd anxiously awaited the "Mile-High Fireworks", which kicked off around 9:30 p.m., featuring a bit of a twist this year.

"The barge will be actually in the middle of the river, and in fact there’ll be more fireworks and the fireworks will be longer," said Pratt. "They perform patriotic music and often in sync with fireworks, so you’re getting this wonderful kind of show between the music and the fireworks." 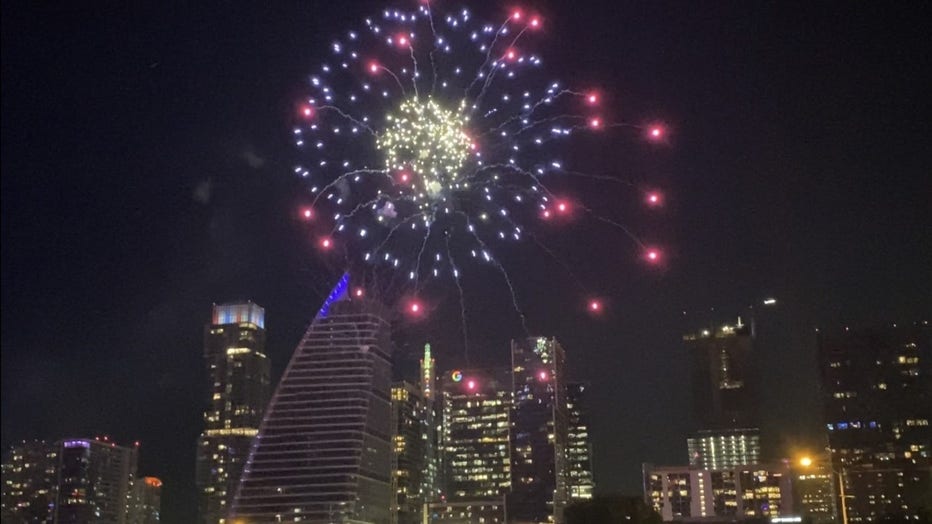 Despite the triple-digit heat, some families arrived mid-afternoon to get a good spot.

"We like to come out and get a little sweaty, throw the bean bags around and see the city skyline. Nothing’s better," said Justin Kurtz of Austin, who arrived with his family around 3 p.m. "It’s hot out here. If you don’t have a tent you’re not doing it right."

With people spending hours out in the sun, the heat was a concern for event organizers.

"We have water stations, we have medics standing by. In some areas we have cooling areas as well, just to make sure that people are hydrated the whole time," said Pratt.

Thousands of people are gathering in Austin to enjoy live music, and of course, a spectacular fireworks show.

"Well I’m sure we’ll sell out," said the band's leader Alexander Robinson. "We just got 12 bags of ice to cool off, so whatever water will be icy cold."

From refreshing drinks to Austin artisans, the vendors were a huge part of this event.

Bryant has had a booth at the fireworks for years.

"It’s very good exposure for my business," said Bryant. "Everything in my booth I make it, there’s hardly anybody doing this anymore"

She's got everything from hats to socks to baby clothes, all tie-dye, of course.

All of it, the perfect family outing for the Kurtz family.

"It’s a unique experience that we want to make a tradition for our family every year," said Kate Kurtz.