BUFFALO, N.Y. - A dangerous lake-effect snowstorm paralyzed parts of western and northern New York on Friday, with 3 feet (0.91 meters) of snow already on the ground in some places by early afternoon. The storm was blamed for the deaths of two people stricken while clearing snow.

The storm's severity varied widely due to the peculiarities of lake-effect storms, which are caused by frigid winds picking up moisture from the warmer lakes, and dumping snow in narrow bands.

Residents in some parts of Buffalo awoke to blowing, heavy snow, punctuated by occasional claps of thunder, while just a few miles north, only a few inches had fallen overnight and there were patches of blue sky.

The worst snowfall so far was south of the city. The National Weather Service reported 2 feet (0.61 meters) of snow in many places along the eastern end of Lake Erie, with bands of heavier precipitation bringing 36 inches (91 cm) in the Buffalo suburbs of Hamburg and Orchard Park, New York.

Locals are making the most of a severe winter storm in western New York that's brought over 3 feet of snow with more on the way.

Schools were shuttered. Amtrak stations in Buffalo, Niagara Falls and Depew closed Thursday and will stay closed Friday. Numerous flights in and out of Buffalo Niagara International Airport were canceled.

The storm was blamed for two deaths, Erie County Executive Mark Poloncarz said, tweeting they were "associated with cardiac events related to exertion during shoveling/snow blowing."

"We send our deepest sympathies and remind all that this snow is very heavy and dangerous," he said.

Even before the snow began falling, the NFL announced it would relocate the Buffalo Bills’ Sunday home game against the Cleveland Browns from its Orchard Park stadium to Detroit.

A day later, the Bills tweeted photos of Highmark Stadium showing the playing field and its more than 60,000 seats virtually buried in snow, and forecasters warned of an additional foot or more by Sunday.

Scott Fleetwood of West Seneca captured video of lightning crashing outside his home throughout the night, as well as snow swiftly burying the pumpkins on his porch.

"The sky is white. ... Everything’s white. The only thing you can see really is the house across the street," he said.

"My tiki bar is now an igloo," he added.

Zaria Black of Buffalo cleared several inches of snow off her car Friday morning as she prepared to go to work. The Amazon employee expected she'd be outside much of the day and was nervous about the condition of the roads.

With numerous cars stuck and abandoned, Mayor Byron Brown urged people to stay off the roads in hard-hit south Buffalo, where extra city and private plows were deployed to open up snow-clogged neighborhood streets.

"When the snow is falling between 3 to 4, 5 inches an hour, you can't beat it," he cautioned drivers at a news conference. "You are going to get stuck."

Meanwhile, streets in downtown and north Buffalo had been cleared but were virtually empty of traffic Friday afternoon.

A car carrying a TV news crew reporting on the storm had to be pushed out of the snow by onlookers early Friday, WGRZ reporter Alexandra Rios said on Twitter.

"Our car got stuck after our 4:30a live shot," Rios tweeted. "Then, at one point about 6 people gathered together to help us out." She said they told her that Buffalo residents "always come together when someone is in need."

New York Gov. Kathy Hochul declared a state of emergency Thursday for parts of western New York, including communities along the eastern ends of Lake Erie and Lake Ontario. The declaration covers 11 counties, with commercial truck traffic banned from a stretch of Interstate 90.

"I am so proud of Western New Yorkers for heeding our call to stay off the roads last night; it was treacherous," Hochul told radio station WBEN. "And as a result, we were able to salt, we were able to clear the roads better than we would’ve if they had been filled with traffic, and we really avoided a large number of accidents."

Poloncarz issued a driving ban beginning Thursday night, though it was downgraded to an advisory for most of the city of Buffalo on Friday. The most intense snowfall was expected to last through Friday evening, with more falling on Saturday into Sunday.

Catholic Health, which operates several health care facilities in the storm zone, has been preparing for days.

What is 'lake effect snow?' Weather expert breaks it down!

What is 'lake effect snow?' Dr. Elizabeth Thomas with University at Buffalo spoke with LiveNOW from FOX's Josh Breslow to explain.

"Our staff has really stepped up and people have been making every effort to get in where they can. Some associates are spending the night," spokeswoman JoAnn Cavanaugh said. "We've made sure our supplies are stocked — food and things for our patients as well as associates."

The weather service also warned of accumulations of 2 feet (0.6 meters) or more of snow in northern New York on the eastern edge of Lake Ontario, and in parts of northern Michigan through Sunday. Parts of Pennsylvania also were seeing accumulations of lake-effect snow. 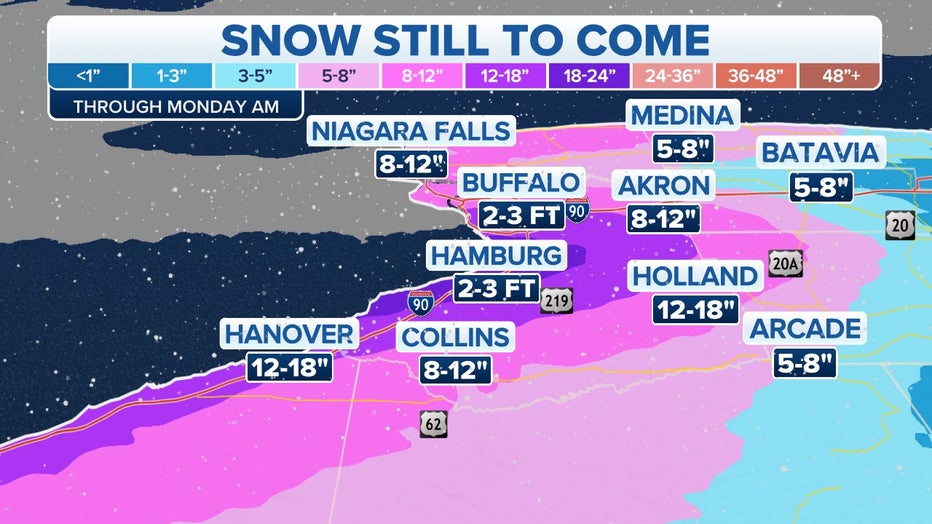 Buffalo has experience with dramatic lake-effect snowstorms, few worse than the one that struck in November of 2014. That epic storm dumped 7 feet (2 meters) of snow on some communities over three days, collapsing roofs and trapping motorists in more than 100 vehicles on a lakeside stretch of the New York State Thruway.

Registered nurse Mary Ann Murphy recalled trudging on foot to Mercy Hospital, her husband, Steve, at her side in the 2014 storm. The memory made both especially glad she was able to drive to work Friday, despite roughly 2 feet of snow.

"I just kind of gunned it down the street in my little SUV," said Murphy, who lives about a mile from the hospital. "I was just thrilled I didn't have to walk."

The director of maternal child services, Murphy said some of her colleagues had spent the night rather than risk a treacherous commute. They expected to deliver eight babies on Friday.