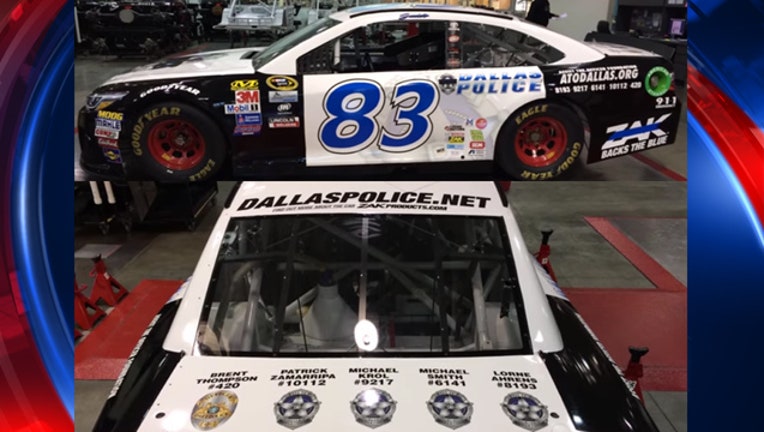 DALLAS, Texas - A Dallas-based automotive company is backing the blue with a car designed to pay tribute to Dallas police officers who’ve lost their lives in the line of duty, especially those from the July police ambush.

ZAK Products revealed a ‘Back the Blue’ No. 83 Toyota Camry that will race in the NASCAR Sprint Cup AAA Texas 500 at Texas Motor Speedway this coming Sunday.

The black, blue and white design was inspired by current Dallas police cruisers and includes the names and badge numbers of the five fallen Dallas police officers and DART officer who were killed on July 7. Eighty-four other names of all the fallen DPD officers since 1881 were also inscribed in the hood.

The car design was revealed during a Thursday event that also doubled as a fundraiser for the Assist the Officer Foundation.

“Moving forward is tough, and we’re not beyond it yet. But events like this and encouragement and support from the community make our jobs more rewarding,” said Interim Dallas Police Chief David Pughes.

“I know we all share the highest level of respect and appreciation for the men and women in uniform who serve this city without hesitation each day,” said ZAK Founder Vic Keller. “I look forward to this opportunity to showcase the city of Dallas and the outstanding men and women of the Dallas Police Department.”