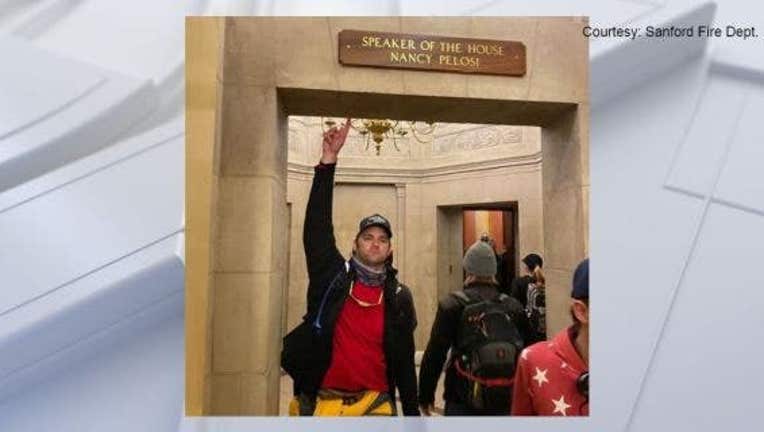 SANFORD, Fla. - A Sanford firefighter has pleaded guilty to one count of parading, demonstrating or picketing in a Capitol building during the Jan. 6 riot, according to documents from the U.S. Attorney’s Office.

Andrew Williams had a hearing on Tuesday morning where he reportedly changed his plea.

In court documents earlier this year, the FBI says that it had obtained two videos and one still picture of Williams inside the Capitol on Jan. 6. According to the filing, in one of the videos, Williams allegedly turns the camera on himself and then a voice can be heard saying, "We are storming the Capitol. Yeah baby!"

One photo appears to show Williams wearing a Trump hat while standing outside the office of House Speaker Nancy Pelosi.  That image was provided to FOX 35 News by the Sanford Fire Department.

"We hold the men and women in this department to the highest standards. It saddens me that the actions of one individual have tarnished the hard work and dedication that the rest of the department puts forth on a daily basis," said Sanford Fire Chief Craig Radzak in January. "Our investigation will continue in conjunction with the current federal criminal investigation.  As is policy with any type of policy violation, including a criminal violation, an internal administrative process must be followed in order to ensure a thorough investigation with a just conclusion. I ask for the public’s patience as we move through this process."

According to documents released Tuesday, the charge carries a maximum sentence of six months in jail and a fine up to $5,000.