COLLEGE STATION, Texas - The Texas A&M Forest Service says practically the entire state is under drought conditions which are creating a negative impact on the landscape, especially on trees. With no end in sight, officials are offering up some tips to help protect trees in extreme heat and dry conditions.

"We are starting to see widespread drought stress in trees across the state," said Karl Flocke, Texas A&M Forest Service Woodland Ecologist, in a news release. "At this point, we are even seeing some trees starting to die because of stress."

Dying trees are generally in isolated pockets where the soil is dry and not holding much water or in parts of the state where there has been an extended period without rain.

"Several different species are dying and declining rapidly," said Flocke. "But generally, we are seeing the most drought-induced mortality on oaks, a few elm trees, hackberry trees and even some junipers."

What's the best thing to slow the mortality rates? Consistently water the trees. Consistent watering is crucial for trees because there is no water storage system within them. Most of the water taken up by trees is not held in the trees but instead is returned to the atmosphere in a process called transpiration.

Still plenty of water in Lake Travis, but well below normal for this time of year.

Due to the lack of a water storage system within trees, they need watering regularly to survive.

As the drought continues, though, many counties, cities, and water districts have begun putting water restrictions in place to conserve water.

"When most of us turn on a hose, the water that comes out was either pumped from an underground aquifer or it came from a surface source such as a lake," said Flocke. "This resource is limited and is necessary to support the life of not only fish and wildlife, but humans as well."

During extreme drought, using water in our landscape for trees and yards can reduce the amount of water available in aquifers, rivers and lakes.

HOW TO BEST TAKE CARE OF TREES BUT ALSO CONSERVE RESOURCES 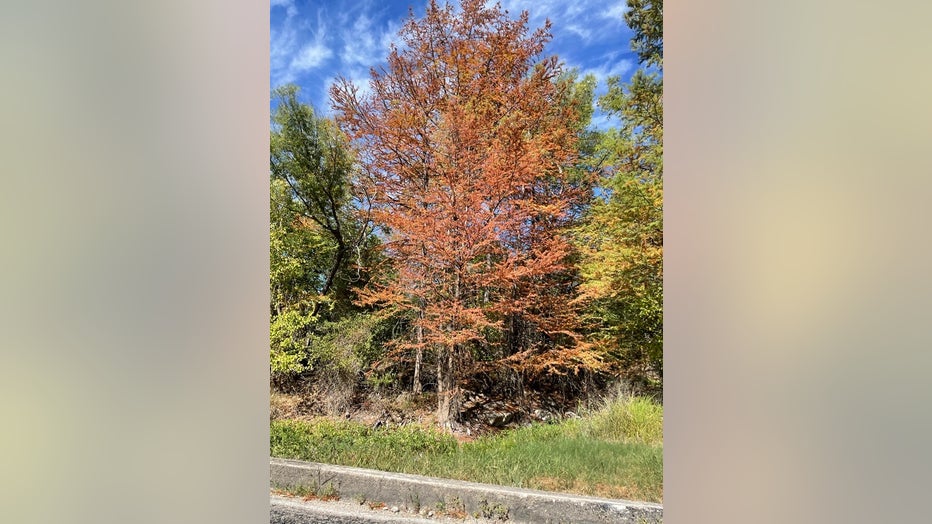 First, well-established trees that are not showing signs of heat stress do not need to be watered. Signs of stress to look for include dropping or wilting leaves, small or malformed leaves, yellowing of the leaves and browning tips of the leaves.

Younger trees that have been planted in the landscape in the last few years, though, should be watered consistently.

Next, it’s important to prioritize the trees that you want to maintain in your landscape. Keeping shade trees alive that add incomparable value when it comes to lowering temperatures around your home should be the first priority.

"It’s important to prioritize keeping a healthy tree canopy, especially around residential areas," said Flocke. "Really, focusing on the trees that have significance to you for either shade, beauty or emotional meaning."

In a typical summer, watering young trees with two to three gallons per inch of trunk diameter, two to three times per week is a good rule of thumb. However, make sure the soil is never saturated with water.

When under water restrictions and drought conditions, though, the goal shifts to keeping your trees alive until conditions change, rather than forcing them into a growing stage, which requires more energy. In extreme drought, trees can survive on half the recommended water – one to two gallons per inch of trunk diameter, once a week.

Lake storage is currently at 1.16 million acre feet, below the first trigger point for Stage 1, but still well above the 900,000 acre feet amount which triggers a Stage 2 conservation request.

When watering your trees, there are many techniques and practices to help limit water waste and increase water retention:

"This summer, the root cause of the issues we are seeing is the dry conditions and extreme heat," said Flocke. "We might be seeing that represented as the tree becomes stressed by other issues, such as insect attacks or fungus forming on the tree, but really, the root cause is drought and heat stress and that is what we need to address in order to keep the trees healthy, not the insects or fungus that are secondary."